If you’re trying to lose weight, drink more water. That’s what many dieters believe. But is that assertion accurate or just a myth? Several recently published studies help to clarify this issue. As is often the case, there isn’t a simple yes or no answer to this question. But looking at the research carefully can help us figure out how to use water to its greatest advantage. 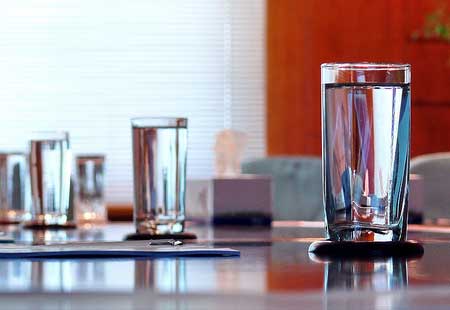 A trial in the August issue of the journal Obesity set out to test the effects of pre-meal water consumption on caloric intake and weight loss. A total of 48 men and women (aged 55-75) were randomly divided into two groups. Half of the participants were assigned a calorie restricted diet. The remainder were asked to follow the same “hypocaloric” diet with one additional measure: they had to drink 500 ml (about 16 ounces) of water before each meal. All the participants had complete control over the quantities of food that they ate. The researchers calculated the approximate number of calories consumed in sample meals eaten at the start and end of the 12 week trial. Here’s some of the data that was collected.

The authors of the research concluded that “when combined with a hypocaloric diet, consuming 500 ml water prior to each main meal leads to greater weight loss than a hypocaloric diet alone in middle-aged and older adults”. (1)

An experiment from 2008 similarly found that 16 ounces of (pre-meal) water reduced the total “meal energy intake” by about 13% or 75 calories in short-term testing on older adults. The age issue appears to be an important factor. This is further illustrated in a study from 2007 which found that preloading with water reduced hunger and improved fullness in both young and older subjects. But a significant reduction in calories consumed was only demonstrated in senior volunteers. (2,3)

If we look at liquid intake and weight loss in a broader context, we can perhaps add a little something extra to the previous findings. A trial from the July 2009 edition of the American Journal of Clinical Nutrition examined 34 overweight volunteers in an attempt to see how two different beverages would affect appetite. The drinks studied here were a) 20 oz of skim milk – providing 25 g of protein, 36 g of lactose/sugar and <1 g of fat and; b) 20 oz of a “fruit drink” containing <1 g of protein, 63 g of sugar and <1 g of fat. (4)

A few months ago, I reported on the practical benefits of using liquid meal replacements to promote weight loss. Programs that utilize protein-based meal replacements are believed to increase overall fluid intake, especially at meal time. The results of a newly released study from the University of Kentucky supports the validity of liquid meal replacements as a weight loss option. In the current research, a medically supervised program (mostly employing 5 fortified protein shakes per day) performed slightly better than a more traditional weight loss program which included solid food. The participants who had 5 shakes a day lost a total of 43 lbs over the course of 19 weeks. The food based program resulted in a loss of 37 lbs during an 18 week intervention. (5)

Drinking water prior to meals appears to be somewhat effective as a weight management strategy for older adults. The effects on the younger population are less certain at this time, but there’s certainly no harm in experimenting with this “preloading” technique . I think ultimately, the take home message is that what we drink and when we drink it can affect the ability to manage both appetite and weight. In my view, the key is to avoid sugary beverages altogether and replace them with pure water and/or protein rich drinks that actually help nourish the body.