When we think of a serious work out our minds often conjure up images of lifting heavy weights, running long distances or employing advanced technologies such as elliptical trainers. Frequently, swimming and aquatic therapies are not regarded as highly as the previously mentioned exercises. But fortunately, science doesn’t care much about popular perception. In the past few years, a good deal of study has investigated the merits of water based exercises. The results may have far reaching implications for the modern management of a number of health conditions. 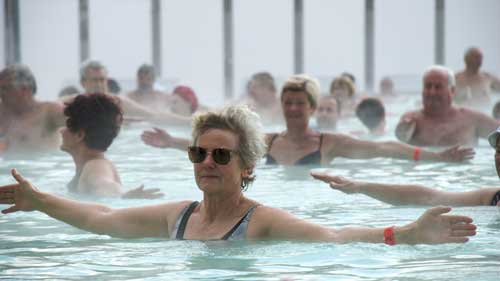 First, a look at some of the general benefits exhibited by aquatic exercise training (AE). A new study published in the European Journal of Applied Physiology examined the effects of a 24 week AE program. 46 postmenopausal women were split into three groups: 1) those engaging in aquatic exercises; 2) a set that utilized land-based “elastic bands” (resistance training) and; 3) a “control” group that did not engage in additional exercise. Measures of physical performance and blood chemistry panels were taken pre and post trial. (1)

Another recently released trial found excellent results in a population that is often restricted in their exercise capability. A two year study in “frail elderly” patients found that a twice weekly water exercise program could improve strength and enhance physical function in this at-risk group. Each exercise session consisted of a 10 minute warm up and a 50 minute aquatic therapy session. (2)

There are several key areas in the healing arts where aquatic physiotherapy may be most useful. Here’s a brief review of some of the most encouraging scientific findings:

Research on water exercise and COPD is controversial because of the chemicals typically used to disinfect public swimming pools. In particular, chlorine exposure has been associated with irritation and potential damage to lung tissue. This is most often pointed out in medical reviews and studies relating to the effects of swimming pool activity and allergy/asthma incidence. This concern has led certain holistically inclined physicians, such as Dr. Andrew Weil, to recommend limiting exposure to chlorinated pools. (15,16,17,18)

In addition to the chlorine issue, there is yet another alarm set off by such pools. A by-product of chlorine, known as trihalomethane, is commonly found in chemically treated water. It’s formed when chlorine and other chemicals come into contact with organic matter such as dirt, leaves, pollen and skin tissue. The danger here is mostly related to a proposed increase in risk of cancer as a result of repeated, long-term exposure. (19,20,21)

Dr. Weil makes several practical suggestions that I’d like to pass along: 1) if you have your own pool, use natural alternatives to chlorine based disinfectants such as silver/copper ion generators; 2) if you frequent a private or public pool, request that they switch to a less toxic pool disinfectant; 3) try swimming only in outdoor pools as the chlorine gas may be less concentrated; 4) wear goggles to protect your eyes from damage/irritation; 5) shower as soon as possible afterward and; 6) try to expose yourself to fresh air soon after swimming. (22,23,24)

I’d like to add one additional recommendation. It’s possible that consuming plenty of antioxidants may help to protect lung tissue from chemically induced inflammation and otherwise support healthy lung function. So far, there’s only preliminary research to support this theory. I’m sharing this information based purely on laboratory research that I hope will afford some protection to frequent swimmers. (25,26,27,28,29)

It’s clear to me that the benefits of aquatic therapy and swimming are considerable. I don’t however discount the risk of chemical exposure, especially for those with conditions that make them particularly vulnerable. A day will likely come when chlorine will no longer be used to disinfect swimming pools. But that time will come more quickly if we passionately express our desire for it. This is yet another example of commercial availability based on consumer demand. Until then, consider the pros and cons of aquatic therapy carefully. Use every precaution you have at your disposal and make the most of your time in the water.