There’s always something new to learn about old herbs. The trouble is, sometimes it takes a very long time for scientists to test new applications for herbal remedies. The traditional medicinals know as Taraxacum officinale (dandelion) and Ginkgo biloba are two such examples. These ancient healing plants have recently been investigated for a few modern day health issues. Dandelion is proposed as a natural diuretic and ginkgo as an aid in managing PMS symptoms. On the other side of the spectrum, there are certain botanicals that are scientific darlings. A brew known as “sour tea” falls into this category. The more research that is released about it, the more it seems that sour tea could lend powerful support for the cardiovascular system and beyond. 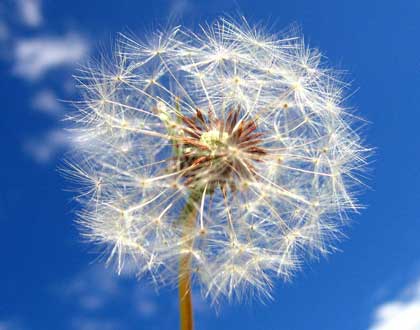 Diuretics are a class of medications that assist the body in releasing greater amounts of liquid. They’re commonly used to help control high blood pressure, kidney disorders and tissue swelling (water retention). A newly released study in The Journal of Alternative and Complementary Medicine claims that dandelion leaf extract may be a viable alternative to synthetic diuretics. This isn’t a revelation but, rather, a reminder. Studies dating back to 1974 have noted this sort of water releasing activity in an animal model. The difference here is that this current study was conducted in human subjects. (1,2)

17 volunteers recorded their “urinary output and fluid intake” for 2 days prior to ingesting a liquid dandelion extract. They were then monitored for a 24 hour period to detect any changes in elimination. All of the participants noted an increase in urinary frequency and volume 5 and 10 hours after supplementing with the dandelion.

This was obviously a very short term experiment. The results were promising, but not significant enough to recommend this natural medicine as a replacement or adjunct to conventional diuretic medications at this time. This is simply a hopeful finding that requires additional research to support its conclusion and utility. (3)

I’m hoping that other inquiries into dandelion will be forthcoming. Specifically, there’s preliminary evidence indicating that this herb may help stunt the progression of breast and prostate cancer cells. There’s also a suggestion that Taraxacum officinale may possess potent anti-inflammatory properties. The future for this botanical may be very bright indeed, but without further study, its potential will likely go untapped. (4,5)

Sour tea is the name given to a brew consisting of Hibiscus sabdariffa. Traditionally, this herbal beverage has been used to manage high blood pressure. In addition, modern science has consistently validated its use for this application. But it appears that its impact on cardiovascular health may extend far beyond a simple hypotensive effect. (6,7,8,9,10)

A newly published trial tested the cholesterol lowering activity of sour tea vs. black tea. 60 diabetic patients were assigned to drink one of the two teas, twice daily for 30 days. Blood tests were taken prior to the experiment and directly afterward. Here’s what the researchers discovered:

These results corroborate previous experiments conducted with animals that also found lipid lowering activity in Hibiscus sabdariffa extracts tested. But this appears to be just the tip of the iceberg. Other laboratory trials have determined that sour tea may also prevent LDL cholesterol oxidation. Oxidized LDL cholesterol is believed to contribute to plaque build-up and hardening of the arteries. (12,13,14,15,16,17,18,19)

Source: The Journal of Alternative and Complementary Medicine August 2009 (a)

In 1993, a lonely study appeared in an obscure French medical journal. The goal of that scientific inquiry was to test the effects of a Ginkgo biloba extract (GBE) in a group of women suffering from PMS symptoms. 165 women with ages between 18 – 45 took part in this experiment over the course of 3 menstrual cycles. That research determined that the GBE helped reduce both physical and psychological PMS symptoms better than a placebo. (20)

It only took 16 years for a follow up trial to take place. Better late than never, I suppose. The August 13th edition of The Journal of Alternative and Complementary Medicine provides support for the first study I just described. In this new experiment, 40 mg of GBE was administered three times daily to a group of 90 students suffering from PMS. The dosing was given “from the 16th day of the menstrual cycle to the 5th day of the next cycle”. The women receiving the GBE had roughly three times better physical and psychological symptom improvement than those receiving a placebo. (21)

On a surface level, it may seem unusual that Ginkgo has any activity at all with respect to hormonally influenced conditions. As many of you probably know, GBE has mostly been studied in modern times for its ability to enhance circulation, learning ability and memory in various populations. In fact, it’s commonly referred to as the “memory herb”. But these current findings about PMS are not completely unexpected to those who have closely followed the whole Ginkgo biloba story. (22,23,24,25,26,27,28)

Studies conducted in animals have found that GBE may support bone health in female rats without ovaries. Other experiments have discovered both estrogenic and “anti-estrogenic” properties of GBE. Because of these findings, some scientists believe that GBE could one day have a potential role as an alternative to HRT (hormone replacement therapy). One explanation for this is that Ginkgo may possess similar phytoestrogenic activity to that found in flax and soy. However, it’s important to note that high dosage, short term use of GBE doesn’t appear to provoke significant hormonal changes in humans. (29,30,31,32)

There may be yet another reason why GBE counters PMS symptoms. Some evidence suggests that Ginkgo extracts can help reduce the production of stress chemicals. This, along with a documented mood elevating effect, may be part of the reason why GBE can help reduce the psychological complications associated with premenstrual syndrome. (33,34,35,36,37)

We live in an exciting time. The wisdom passed down from generation to generation is now being used by scientists to help further our understanding of the true potential of natural remedies. But there can be a dark side to this too. There’s always the risk of losing some of the traditional “magic” during the sometimes rigid scientific process. That’s why I think it’s so important to have both the conventional and holistic camps working together to ensure that doesn’t happen. We need, and can benefit greatly from, the tools contained in historical healing traditions and those provided by modern medicine. So, let’s do our best to encourage family, friends and “healers” to be open to the best of both worlds.