This Monday is Labor Day in the United States. Among other traditions, barbecuing and grilling frequently play a prominent role in the celebration of this holiday. But little known guests called “heterocyclic aromatic amines” (HCAs) almost always tag along and try to spoil the festivities. HCAs are toxic substances commonly produced during the cooking of beef, chicken, fish and pork. So today, I’ll tell you how to keep HCAs from crashing the party and get rid of the HCAs to which we can’t help but be exposed. 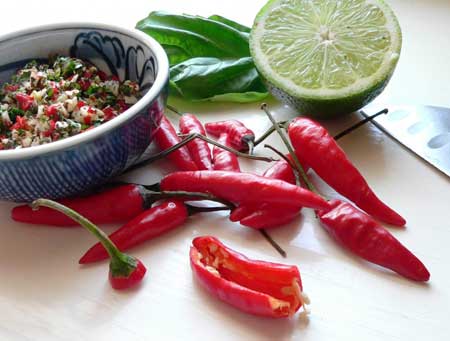 HCAs are formed when certain protein rich foods are cooked at high temperatures (100°C or above). It appears that “muscle meats” are the greatest contributors of HCAs, whereas other protein sources such as cheese, eggs, organ meats, milk and soybeans contribute only negligible amounts. Barbecuing, broiling and frying are the cooking methods that produce the greatest amounts of HCAs because of the high heat. Baking and roasting (under 200°C) produce fewer HCAs. Boiling, poaching and stewing are the least likely to promote HCA formation. Cooking time also impacts the concentration of HCAs. Cooking food until it’s “well done” generally creates more HCAs than food prepared to “medium” or “medium-rare”. (1,2)

Many laboratory and population studies conducted over the past few decades have singled out HCAs as likely suspects in promoting a variety of malignancies. Researchers have discovered a connection between HCAs and bladder, breast, colon, esophageal, pancreatic and prostate cancers. In addition, new evidence suggests that HCAs may also play a role in the development of cardiovascular disease. In fact, some scientists believe that the historic negative associations ascribed to frequent meat consumption may be partially the impact of HCAs on the human body. (3,4,5,6,7,8,9,10)

The good news is that there are natural ways to reduce the formation of HCAs and lessen the damaging effects when consumed.

Marinating foods prior to cooking them is perhaps the best first step in decreasing the levels of HCAs. Marinating is much like applying sunscreen before stepping out for a day at the beach. Antioxidants that are present in a marinade’s liquid base, as well as many of the herbs and spices discourage the harmful chemical reaction that typically occurs when amino acids and creatine interact with high heat.

A study published in the August 2008 edition of the Journal of Food Science examined the effects of several different kinds of marinades and their respective abilities to inhibit HCA production. As a test, steaks were marinated in three separate solutions for one hour prior to cooking. All of the mixtures contained a base of soybean oil, vinegar and water. Here’s a brief description of the other key ingredients in each blend:

A fourth unmarinated steak was also cooked and used as a comparison model. The results of this experiment indicated that the steak cooked with a “Caribbean marinade” contained 88% fewer HCAs than did the un-marinated steak. The “herbal” and “Southwestern” marinades decreased HCA concentrations by 72% and 57%. (11)

It’s important to note that not all marinades are protective. A study published nearly a decade ago by the Cancer Research Center of Hawaii found that marinating in a turmeric-garlic sauce or teriyaki sauce could reduce HCAs by as much as 67%. But, marinating in a “commercial honey barbecue sauce” caused a dramatic rise in HCA levels. (12)

Apart from herbs and spices, there appear to be certain ingredients that are particularly well suited for use in healthy marinades. Here’s a brief rundown of the top contenders:

Many of these studies use beef as their testing preference. But the same concerns about HCA formation also apply when cooking chicken or fish. In some parts of the world, such as Japan, fish accounts for the majority of HCA exposure. Even healthy, antioxidant-rich foods, such as salmon, are not immune to this toxic reaction. (20,21,22) 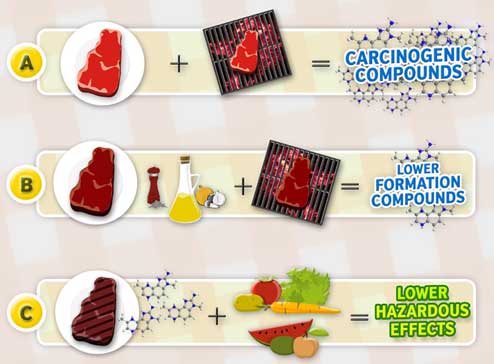 Regardless of how hard we try, we’ll all undoubtedly be exposed to some amount of HCAs in our diet. I’ve identified four specific ways to help nullify the damaging effects of these proposed carcinogens after they’re consumed.

The key to healthy barbecuing and grilling involves several different steps: 1) cook at the lowest reasonable temperature; 2) marinate with antioxidant rich ingredients; 3) eat and drink protective foods along with meals that are likely to contain HCAs. Try to incorporate as many of these guidelines as possible the next time you throw some wild salmon, thick-cut pork chops or grass-fed buffalo burgers on the grill. I hope you all enjoy the long holiday weekend in the best possible health. I’ll be taking Monday off to celebrate with my loved ones and maybe we’ll do some healthy grilling of our own.