No one looks forward to the prospect of an extended hospital stay. The best case scenario is a brief visit with few or no complications. Unfortunately, one of those complications is frequently a hospital borne bacterial infection, MRSA (methicillin-resistant Staphylococcus aureus) which greatly minimizes the chances of a speedy recovery. As indicated by its name, this menacing form of Staph infection is immune to many commonly used antibiotics. In addition, it generally strikes those who are the most vulnerable – the elderly and immune compromised patients. 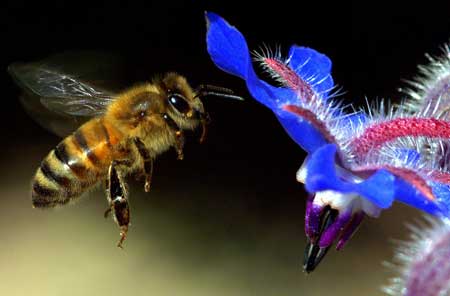 In November 2009, a scientific review will be published that is entitled, “Rediscovering the Antibiotics of the Hive”. It discusses the potential of honey and other bee byproducts as anti-infectives whose effect sometimes even extend to threatening bacteria such as MRSA. The basis for this review is easily found by searching recent entries in the medical literature. What’s also becoming apparent is just how honey may pack such a potent anti-bacterial punch. (1,2,3)

A presentation given this week at the Society for General Microbiology meeting explains precisely how a special form of honey (manuka honey) inhibits protein production within MRSA cells and ultimate leads to their death. A study from June of this year appears to support these findings. That experiment utilized a similar “medical-grade honey” and determined that all of the bacteria tested could not form resistance to honey in the same way that they did to prescriptive antibiotics. A separate investigation appearing in the December 2008 edition of the journal Alternative Medicine Review found that four different varieties of honey demonstrated considerable activity when applied to antibiotic-resistant bacteria. The impact of the honey was magnified when it was combined with another bee product called royal jelly. (4,5,6)

The above findings are of particular interest in the management of topical wounds. The presence of such injuries greatly increase the likelihood of hospital-borne and community-associated CA-MRSA infections. The latter term refers to infections that are found in otherwise healthy individuals who are not in a hospital setting. The fact that both forms of MRSA conditions are occurring more frequently than in the past is great cause for concern for medical professionals worldwide. (7)

A standardized, medical-grade honey (Medihoney) was recently compared to standard care in the management of wound healing. 105 patients were provided with either conventional wound dressing or the medicinal honey. On average, those treated with honey demonstrated a healing time of 100 days. Those given the conventional care required 140 days to mend. A British review from 2008 also validates the potential of this specific form of honey in the treatment of wounds. Medihoney is a form of manuka (Leptospermun) honey which is indigenous to Australia and New Zealand. It’s been approved for select topical use by Health Canada and the US FDA. (8,9,10)

Another manuka honey product (Woundcare 18+) underwent testing in an Irish trial that focused on healing outcomes in venous leg ulcers. Once again, the honey product was compared to a form of standard care (hydrogel therapy). The total length of this experiment comprised 12 weeks and involved 108 participants with leg ulcers. Both treatments were applied for 4 weeks and a follow-up assessment was provided 8 weeks afterward.

The 12 week results were even more impressive. 44% of the honey users were fully healed (vs. 33% in the conventional group). Only 6 of the honey patients developed infections. 12 of the hydrogel patients were diagnosed with bacterial infections. (11)

A meta-analysis from May 2009 summarizes the results found thus far in the management of another form of injury: burn wounds. A total of 8 studies, involving 624 volunteers, were used in assessing the value of honey in burn treatment. Most of the comparative trials looked at the performance of honey vs silver suphadiazine. Honey was deemed as having a superior effect when the results were based on 15 days of treatment. In fact, every measure of healing indicated a better response when honey was employed. The authors of this review concluded that, “available evidence indicates markedly greater efficacy of honey compared with alternative dressing treatments for superficial or partial thickness burns.” However, it’s important to note that they also call for more research to support and verify their limited findings. (12)

The problem of antibiotic resistant bacteria is a relatively new phenomenon. Unfortunately, it appears that this modern medical challenge will likely become a bigger issue in the coming years. I’m not suggesting that honey is the entire solution to getting this health threat under control. But I am encouraged that we now appear to have one more natural resource with which to battle back.