Many doctors and nutritionists have long held the view that eating more fruits and vegetables is key to maintaining a healthy weight. Sometimes there’s some disagreement about what kinds of plant foods best serve this purpose. But ultimately, there is a general consensus that this is a positive step we can take towards combating obesity. It’s been widely assumed that fruits and veggies largely replace less nutritious foods in the average diet. This is frequently the case. However, recent scientific developments help explain exactly why plant-based foods have a fat fighting effect. This additional knowledge may provide a renewed incentive for eating more natural, whole foods. 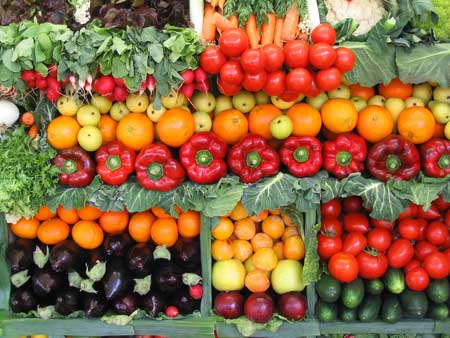 The power of fruits and vegetables goes far beyond dietary fiber, minerals and vitamins. Every piece of produce that you see at your local grocery store or that grows in your garden is literally packed with substances known as “phytochemicals”. These are chemicals that are known to protect the human body. They very often possess potent antioxidant properties and are being investigated for their potential roles in addressing a broad array of health conditions. (1,2,3,4,5)

The importance of phytochemicals is so great that scientists are attempting to grow crops that contain higher levels of them. They’re doing this by selectively breeding the most potent members of various vegetable families in specific climates and environmental conditions. There are two primary reasons for doing so: 1) Scientists believe that it’s advantageous to have an optimal intake of these substances on a regular basis; and 2) They’d like those who don’t eat much produce to get more significant amounts of phytochemicals when they do. (6)

A just published study in the Journal of Human Nutrition and Dietetics points to a new connection between plant food consumption and weight. A group of 54 “normal weight” and overweight participants (aged 18 – 30) kept a food diary for three days. The researchers analyzed the food questionnaires and focused on several categories such as caloric intake (energy), food groups and something called a “phytochemical index” (PI). A PI is defined as the “ratio of the energy from high nutrient, phytochemical-rich foods to overall daily energy consumed”. There were several key findings.

The authors of this preliminary study concluded that, “The PI is inversely related to adiposity and oxidative stress in healthy young adult, and is responsive to body weight changes”. (7)

I used that first study as a springboard to try to determine why a higher intake of phytochemicals may help promote a healthier weight. Here’s some of what I discovered:

In May 2009, a paper was presented in the American Journal of Clinical Nutrition that tested the hypothesis that increased fruit and vegetable consumption could help manage weight in a high risk group – individuals who had recently stopped smoking. Over 89,000 European men and women participated in this evaluation which followed them for an average of 6.5 years. The authors concluded that, “Fruit and vegetable intake relates significantly, albeit weakly, to weight change. For persons who stop smoking, high fruit and vegetable intakes may be recommended to reduce the risk of weight gain”. (22)

Knowing what I know now, I wonder if a new study such be undertaken. If I were designing such a trial, I’d ask the participants to eat fruits and vegetables that are the richest in phytochemicals. For instance, I’d suggest eating spinach instead of iceberg lettuce or blueberries rather than white grapes. Another important piece of the puzzle may be to focus on phytochemical-rich whole fruits and vegetables. Studies from the past several years indicate that eating whole foods tends to satisfy hunger and manage weight better than drinking 100% fruit juice, for instance. (23,24,25)

Phytochemicals are certainly not the be all and end all of weight loss. But I think this current research highlights yet another reason why food should be chosen strategically. It is possible to select menu items that you enjoy and that are also tailored to your individual needs. If excess weight is an issue, here’s yet another reason to include more low-glycemic fruits and vegetables in your diet.


5 Comments & Updates to “The Phytochemical Diet”