I’m entirely open to seeing a doctor and having appropriate medical tests conducted. I’m even willing to judiciously use medication if it’s truly warranted. But there are many conditions that effect quality of life without threatening mortality. These are the types of health concerns that are often best addressed by natural means. A good example is a common problem that afflicts a large segment of the adolescent population. Acne vulgaris is a skin condition that’s a major cause of both physical and psychological harm. It just so happens that there is an all natural, inexpensive and safe treatment plan that may help abate the suffering. 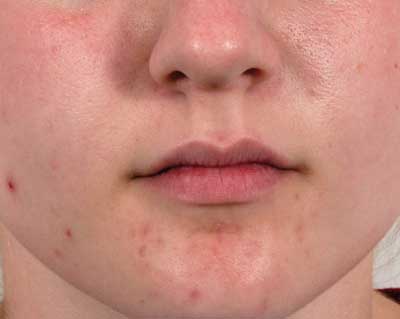 A newly published study examined the dietary patterns of 3,775 “late adolescents” (18 -19 years old) who reside in Oslo, Norway. This same evaluation also looked at the connection between acne prevalence and “mental health problems”. Food frequency questionnaires and a psychological test referred to as the Hopkins Symptom Checklist were used to compile the data on the teenagers.

Based on these findings, the authors of this population study determined that, “self-reported acne is significantly associated with mental distress and, among girls, with infrequent consumption of raw vegetables”. (1)

My three-part system for improving acne involves the following steps: 1) eat a low-glycemic diet that’s rich in healthy fats and high in fiber; 2) test to see if dairy-based foods are contributing to your symptoms; 3) include select nutritional supplements in your daily routine.

Diet is by far the most important aspect of my proposed plan of action. If you do nothing else, change this one factor and I think you’ll likely find some degree of positive change in your skin’s condition. The concept behind this type of diet is very simple:

It’s important to note that I didn’t pull these concepts out of thin air. I’m basing these recommendations on the preponderance of recent scientific evidence relating to the connection between food choices and acne. (2,3,4,5,6)

Three recent studies have looked at the association between milk intake and acne occurrence. A 2008 trial published in the Journal of the American Academy of Dermatology examined the eating patterns of over 4,200 teenaged boys. A “positive association” was found with respect milk, in general, and skim milk in particular. Adolescent females also appear to be sensitive to dairy. A 2006 study from Harvard investigated the milk consumption of over 6,000 girls (aged 9 – 15). It likewise found a similar connection between milk use and acne. The acne/dairy connection may extend to the adult population as well. In 2005, Harvard researchers theorized that this may occur due to, “the presence of hormones and bioactive molecules in milk”. This point of view is supported by more contemporary research as well. (7,8,9,10)

Consider adding a high quality multivitamin/mineral, fish oil and green tea to your wellness program. A small trial from October 2008 found that the daily use of a multi-nutrient product significantly reduced inflammation and lesion counts in a group of 5 patients with “mild to moderate acne vulgaris”. 3 males and 2 females (aged 18 – 23) were asked to take a supplement containing a daily total of 1,000 mg of EPA (a fatty acid in fish oil), 200 mg of EGCG (a component of green tea), 200 mcg of chromium, 200 mcg of selenium and 15 mg of zinc. 4 out of the 5 patients showed a reduction in problematic skin symptoms. On average, the total number of lesions dropped from 63 to 40 over the two month trial. There was also a reduction in inflammation and redness in the acne prone areas. The “average inflammatory lesion count” registered as 21 at the start of the study. After two months, it declined to 7. An improvement in “mental outlook” was also reported by the patients. More research is certainly called for, but these preliminary findings offer reason for hope. (11,12,13)

There is little question that genetics play a significant role in skin condition. Many of us know this both from personal experience and what we’re frequently told by dermatologists. But, I believe that the program outlined above can help improve skin quality and, more importantly, overall quality of life for many adolescents and adults who feel destined to suffer with acne or other inflammatory skin issues. If you decide to try out my 3 step program, please let me know how it works out for you.