We all need reminders. There’s so much information to process these days that much of what we learn is often misplaced somewhere deep in the recesses of our minds. While scouring through my list of scientific resources, I was reminded of some previous topics that needed updating and perhaps more importantly, expanding. Many times I’ll focus on a specific function of a food, supplement or therapy. By revisiting these topics, I can paint a broader and more accurate picture of the full potential of these gifts that nature provides. 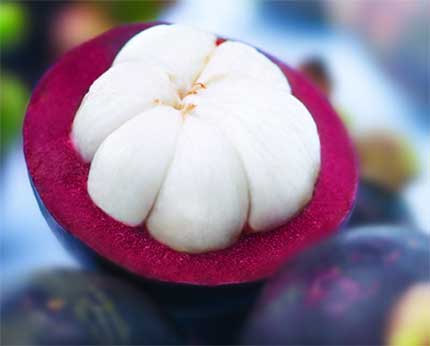 In March of this year I described how using a mangosteen extract helped me to overcome a debilitating skin condition. Since then, more evidence has emerged that strengthens the mangosteen/skin health connection. This time, researchers investigated rind extracts of younger and older mangosteen. They determined that the younger fruit contained higher levels of certain antioxidants (phenols and tannins) while the older rind contained greater concentrations of anti-bacterial agents (flavonoids and a-mangostin xanthone). The conclusion reached was that both extracts yield anti-acne substances that could be utilized in formulating topical skin care preparations. In other news, a mangosteen based multivitamin/mineral was recently shown to boost immune function in a group of 59 healthy, middle-aged volunteers. In the course of 30 days, enhancement of immune cell activity, a reduction in inflammation and self reported “greatly improved overall health status” were noted. (1,2)

On many occasions I’ve touched upon the issue of high blood pressure. Vitamin D has also been the focal point of several previous columns. Study results just presented at the American Heart Association’s 63rd High Blood Pressure Research Conference draws an important correlation between a lack of this vital nutrient and poor, long term blood pressure control. The take home message of the presentation is that inadequate levels of Vitamin D in younger women can lead to a dramatic increased risk of hypertension when they reach menopause. (3)

The women who demonstrated a Vitamin D deficiency in 1993 were three times more likely to suffer from hypertension at the conclusion of the study, in 2007. The researchers defined a deficiency as Vitamin D levels below 80 nmol/L. These findings are supported by a major review article that appears in next months issue of the journal Nature Reviews Cardiology. The conclusion presented there is that “accumulating evidence, ranging from insights into molecular mechanisms to the outcome of randomized controlled trials, favors the hypothesis that Vitamin D deficiency contributes to arterial hypertension”. (4)

Some researchers, including the co-author of the women’s hypertensive study, are suggesting that Vitamin D intake well above the official recommendations may be needed to reach optimal D concentrations in the body. In order to reach those levels, supplementation is often necessary. But it’s important to note that not all forms of Vitamin D are created equally. In fact, some experts warn that Vitamin D2 (ergocalciferol) has less than 1/3 the potency of Vitamin D3 (cholecalciferol). They also caution that D2 may have a “shorter duration of action relative to D3”. (5)

New research from the Washington University School of Medicine in St. Louis draws a link between a chronic lack of sleep and brain plaques that are associated with Alzheimer’s disease. In the experiment, rats that were sleep deprived produced larger quantities of a protein called orexin and subsequently developed more plaques at an earlier age. The scientists involved draw a direct connection between the production of amyloid beta (the main substance that makes up brain plaque) and sleep and wakefulness. When the rats were asleep, less of this plaque building protein was produced. Conversely, the sleep deprived mice showed a 25% increase in amyloid beta levels in the brain. Another reason to get adequate sleep has to do with your ability to concentrate. Sleep deprivation was recently proven to reduce attention and the ability to recognize faces and places. Overall, reaction time slowed and image recognition declined. Whether you look at the short term or long term consequences of sleep loss, the results can have serious implications. (6,7,8)

Everyday health concerns such as poor complexion and the occasional cold and flu can certainly impact quality of life. But it’s often the unseen health effects of our current lifestyles that truly go unnoticed. How many of us regularly test our blood pressure much less have a brain scan? The items I mentioned today were not intended to cause any undue panic. Instead, I hope they will encourage you to pay closer attention to the state of your health on an ongoing basis. Prevention is the domain of the health care consumer. We need to own that and be proactive in protecting good health. Doctors are primarily trained to address established illness, not help maintain future wellness. Working in tandem with your physician will make sure all bases are covered.