If you’re overweight and you snore at night, there’s a good chance you suffer from obstructive sleep apnea (OSA). People with this condition are unable to get adequate quantities of air through the nose and throat while sleeping. This can lead a lack of oxygen in the bloodstream and poor sleep quality due to frequent choking and loud snoring. Even if you set aside enough time to rest, you simply will not be well rested when you wake up. This drowsy state of mind puts people at higher risk for overall mortality resulting from accidents and cardiovascular related health events. The best natural way to address this serious condition is to lose as much excess weight as possible. Today I’ll share three safe and natural techniques that may help you achieve that goal. 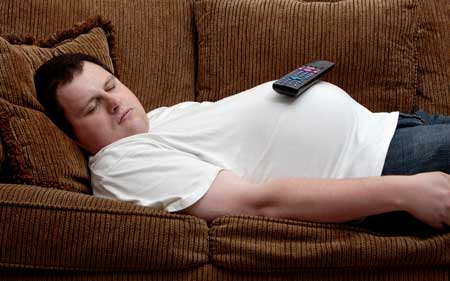 The days when snoring was a joking matter are long gone. It’s estimated that about 12 million people in the US alone suffer from sleep apnea. Study after study in the medical literature tells us that this sleep disorder can significantly increase the odds of blood sugar irregularities, high blood pressure and stroke risk. In short, sleep apnea can severely impact the quality and quantity of one’s life. (1,2,3)

A new study in the Archives of Internal Medicine is the latest to prove that modest weight loss can lead to dramatic improvements in the sleep patterns of overweight individuals. A total of 264 obese patients with type 2 diabetes were enrolled in the current trial. Their ages ranged from 45-75 years old. Half of the group adopted an “intensive” weight loss program and began exercising about 3 hours per week. The remainder of the study volunteers attended educational classes that focused on the conventional management of diabetes through diet, exercise and social support. After one year, those on the intensive weight loss program lost approximately 24 pounds. Roughly 3 times as many participants in the treatment group achieved “total remission of their OSA”. The researchers specifically noted that those who lost the greatest amount of weight reported the most significant declines in severe OSA symptoms. This final point suggests that even greater improvements could be expected if continued weight loss occurs. (4)

Losing weight and keeping it off can be a major challenge for many people. Three recent trials offer natural suggestions about how to better manage appetite and compulsive eating while on a weight loss program:

My regular readers know that I’ve recently completed a 80+ pound weight loss program. I used to suffer from severe sleep apnea myself. Not only did my loud snoring and interrupted sleep concern my wife, but it also impacted her ability to rest peacefully. That was actually one of the most compelling reasons for me to finally address my own weight loss challenge. I didn’t use acupuncture, but I did use my fair share of prebiotics and relaxation techniques to help me along the way. I’m convinced that if I could lose the excess weight and dramatically improve my sleep quality, anyone else can as well.