While searching through an upcoming edition of the esteemed journal Nutrition, I came across a rather curious study from Spain. The research assessed the impact of different types of alcohol on bone density in a group of middle-aged women. About half of the female participants were premenopausal, while most of the others were postmenopausal. The scientists conducting this population study examined questionnaires provided by the women and attempted to find patterns between alcohol consumption and the results of bone ultrasound tests. No correlation was found between wine drinking and bone density. However, the researchers did note stronger bones in women who drank beer regularly. 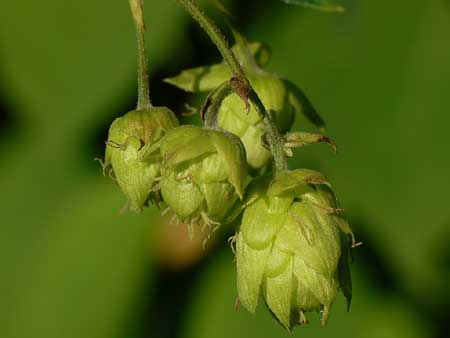 At first glance, the results of this trial may seem absurd. How could beer possibly contribute to healthy bones? The answer may lie in the concluding remarks postulated by the study’s authors: “greater bone density in women beer drinkers might be the result of the phytoestrogen content of this alcoholic drink”. As I’ve mentioned before, phytoestrogens are plant based hormones that replicate the effects of human hormones under certain circumstances. Generally speaking, they’re believed to be much less potent than the estrogens used in hormone replacement therapy (HRT). On the other hand, some research indicates that phytoestrogens may not carry the same risks as conventional HRT and could actually confer protection against various health conditions. (1,2,3,4,5)

It appears that the hops (Humulus lupulus) in beer are most important with regard to bone health and beyond. Several laboratory experiments have found that hops contain potent phytoestrogens. A 2006 study presented in the Journal of Nutrition identified a substance known as 8-prenylnaringenin (8-PN) as the primary active ingredient from the flowers of hops. They went on to conclude that “moderate beer consumption can lead to 8-PN exposure values that might fall within the range of human biological activity”. Various other studies have verified the estrogenic potential of 8-PN and determined that it is likely active in the body via expected dietary intake. (6,7,8,9,10)

In the past, numerous trials have evaluated the effect of a hops/valerian root extract on various psychological and sleep parameters. But lately, the line of scientific investigation has shifted to the role that hops may play in managing hormonal conditions. (11.12.13.14.15)

A Belgian trial recently assessed the impact of a “hops extract enriched with 8-prenylnaringenin on relief of menopausal discomforts”. 67 menopausal women were asked to take one of three treatments over a 12 week period: a) a hops extract containing 100 mcg of 8-PN; b) the same extract with a higher concentration (250 mcg) of 8-PN; c) an inactive placebo. A standardized questionnaire known as the Kupperman Index (KI) was used to determine pre and post trial menopausal symptoms.

The hops extract, that was standardized to 100 mcg of 8-PN, was deemed “an attractive addition to the alternative treatments available for relief of hot flashes and other menopausal discomforts”. (16)

Two more recent studies have used hops-based products to address menopausal complaints. The first included a “morning/evening” supplement that was intended to support well-being in the daytime and restful sleep at night. That supplement included various herbs such as black cohosh, green tea, hops, kava, panax ginseng, soy and valerian extracts. Over the course of 2 months, a group of women between the ages of 45-65 took one capsule of the morning and evening formulas per day. A test called the Greene Climateric Scale (GCS) was used to determine daytime efficacy. The Pittsburgh Sleep Quality Index (PSQI) was applied to evaluate rest patterns. (17)

A German study from 2006 examined a topical gel consisting of hops phytoestrogens as an alternative to synthetic estrogen creams in postmenopausal women with genital atrophy. The gel was applied twice daily for 1 week, after which it was administered twice weekly for an additional 11 weeks. A “Visual Analogue Scale” was used to measure signs of atrophic vaginitis (burning, dryness, inflammation and itching). The patients and researchers reported positive changes to most of the symptoms present at the start of the trial. The improvements began to manifest within the first week of application. There were no significant side effects relating to the treatment and a “high level of acceptability” was noted. The authors of the study commented that the hops gel, “could be considered an effective and safe alternative treatment of genital atrophy in post menopausal women, especially when HRT is not recommended”. (18)

There is always a certain degree of concern expressed when a natural or synthetic medicine helps to improve hormonal symptoms. Modern medicine has discovered that conventional hormone replacement and other medications used to reverse menopausal health issues often carry some troublesome side effects. Many of these adverse reactions are related to an increased risk of hormonally influenced cancers. (19,20,21,22,23)

One of the downsides of natural remedies is that they’re generally not subjected to nearly as much research as their pharmaceutical counterparts. Therefore, we simply don’t know as much about the activity of hops in comparison to HRT in terms of its effect on cancer. However, the little that we do know is very encouraging. Laboratory studies in animals and human cancer cells indicate that certain antioxidants in hops (flavonoids) tend to discourage the growth of various cancer cells (breast cancer, colon cancer and ovarian cancer). Other preliminary evidence suggests that components of hops may reduce the likelihood of the spread of breast cancer. It’s also reassuring to note that other hormonally-sensitive cancers, such as prostate cancer, appear to be antagonized by hops. (24,25,26,27,28,29,30,31,32)

My goal in sharing this information today is to not necessarily to encourage you to start drinking beer. I think an occasional beer is fine for most people, but you don’t have to drink it to derive the benefits that I’ve described here. This reminds me of resveratrol (the “red wine molecule”), another valuable phytoestrogen. Many people get their daily supply of this “anti-aging” substance via supplementation. They avoid the alcohol and calories by simply swallowing a tiny capsule every day. In fact, the amount of resveratrol in many supplements far exceeds what you could reasonably expect to get by drinking wine. The same is true of hops. In today’s marketplace there are high quality, biodynamic and organic beers available. Nonalcoholic hops extracts are also sold at many health food stores and online. Only time will tell whether beer and hops should ever take a place at the top of your grocery and supplement lists. In the meantime, it’s reassuring to know that an occasional beer may actually do your body and bones some good.


8 Comments & Updates to “Beer and Menopause”