The world is currently suffering from an energy crisis. I’m not talking about the lack of oil reserves or alternative energy sources, but rather the number of coffee shops that have sprouted up everywhere. Don’t get me wrong, I have nothing against a good cup of coffee. In fact, drinking coffee is often a healthful practice. But utilizing a natural stimulant, such as caffeine, isn’t always appropriate or advisable. So what can you do if you frequently find yourself feeling “wiped out”? One option is to consider using an adaptogen. 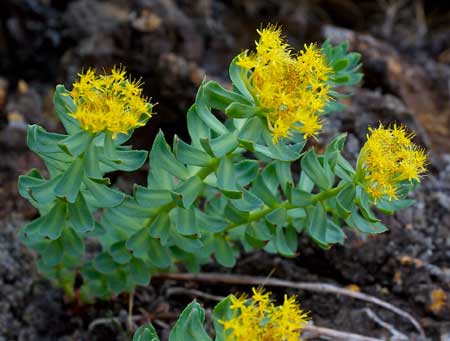 The term “adaptogen” generally refers to a plant-based remedy with long historical use that can help manage the physical and psychological stressors of life. As a rule, these tonics should be relatively non-toxic and help optimize body function without causing any sort of imbalance. Ginseng is perhaps the most popular supplement in this exclusive club. Ashwagandha, holy basil, licorice and schisandra are several other medicinal plants that are used alone or in combination to help the body and mind adapt.

Rhodiola is yet another member of this class of natural remedies. This particular “arctic root” has developed a rather impressive scientific resume over the last 10 years. The most recent study was in June 2009. It evaluated the effects of combining Rhodiola and Ginkgo biloba, an extract from the leaves of the ginkgo tree, typically used to support healthy brain function and circulation. The details of the study are as follows:

The men receiving the herbal blend showed an increase in oxygen uptake and a decrease in fatigue. This supplement partly reduced fatigue by: a) blunting an expected elevation in cortisol (the stress hormone); b) preserving a stable concentration of testosterone, which dropped in the placebo group. The maintenance of this cortisol/testosterone ratio is often used to identify fatigue and overtraining in endurance athletes. (1)

A study from 2004 suggests that using Rhodiola alone can also be effective in combating physical fatigue in “healthy young volunteers”. In that research, a single dose of R. rosea (200 mg) “increased time to exhaustion” and oxygen uptake. The particular extract used in this trial was standardized for 3% rosavin and 1% salidroside. These are believed to be the primary active ingredients in this adaptogen. (2)

Improving physical performance and promoting resistance to exercise burnout is certainly desirable. But the combination of supporting the mind as well as the body is what sets Rhodiola rosea apart. Several recent experiments suggest that this “golden root” possesses potent physiological and psychological activity.

There are several proposed mechanisms by which R. rosea appears to work. Laboratory research in an animal model indicates that it may actually increase the number of neurons (nerve cells) in the hippocampus and prevent injury to existing neurons in that region of the brain. The hippocampus plays an important role in regulating memory and mood. Certain antidepressants (SSRIs – selective serotonin reuptake inhibitors) are known to function in a similar manner. On the physical front, preliminary research suggests that R. rosea can: a) increase antioxidant concentrations in the human body; b) discourage systemic inflammation (C-reactive protein levels); and c) elevate glycogen levels (a form of stored energy that’s held in the liver and muscles). Taken as a whole, this combined evidence paints a picture of a tonic that protects and restores sensitive areas of the body and brain that may be vulnerable to the effects of stressors. (9,10,11,12)

There are many aspects of modern living that deplete our natural energy reserves. Chief among them are chronic physical/psychological stress and a poor diet. There are also certain health conditions that can play a part in a generalized feeling of physical grogginess and mental malaise. It’s very important to rule out such conditions as anemia, insomnia, nutritional deficiencies and thyroid disorders as a first step in addressing general fatigue. However, if you’re basically in good health but you still feel chronically wiped out, you may want to consider experimenting with a well researched adaptogen such as Rhodiola rosea. (13,14,15,16)