There are few things in life that are more devastating than being diagnosed with a malignancy. Over 12 million new cancer cases were recorded worldwide in 2008. According to the World Health Organization, those numbers appear to be growing. In 1975, nearly 6 million people were diagnosed with cancer. In 2000, that number grew to 10 million. By the year 2030, it is estimated that more than 20,000,000 people will have to deal with this reality. On this site, I regularly report on natural therapies that will hopefully offer protection from this unwelcome fate. But it’s also important to have resources available if cancer becomes a personal issue for ourselves or someone we love. (1) 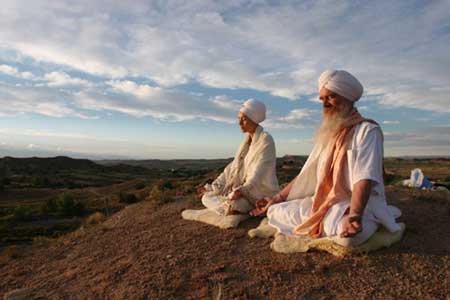 One of the most promising complementary therapies for cancer patients is meditation. Several new studies have identified this practice as being an important adjunct to both alternative and conventional recovery programs. Before I review the actual data, I want to clarify my objectives, which are: 1) to dispel the notion that only certain “special” forms of meditation can be health promoting; 2) to emphasize the role that meditation can play in supporting the mental health of doctors and nurses, which in turn, can assist in the patients’ healing process.

A recent study performed at St. Mary’s College in Fukuoka, Japan examined the effects of a “mindfulness-based meditation therapy” on the mental health of 28 cancer patients. All the participants were receiving conventional “anticancer” treatment during the course of the trial. The meditative therapy involved 2 sessions. In the first, an instructor taught the patients the technique – which involved breathing exercises, meditation and yoga movements. The patients then practiced these exercises at home with the assistance of a meditative CD. Measures of anxiety, depression and “spiritual well being” were taken pre and post treatment. Anxiety and depression scores dropped by about 30% in the meditators. But these results provide only a partial picture of the apparent capabilities of mindfulness: (2)

There is even some research that suggests that mindfulness can positively influence the levels of select hormones (DHEA) that may affect the progression of certain hormonally-influenced cancers. This is yet another exciting mechanism by which meditation and stress management may improve outcomes in cancer survivors. (5)

One of the most popular forms of the meditative practice is known as Transcendental Meditation (TM). A study presented in the September 2009 edition of Integrative Cancer Therapies suggests that TM could be of benefit to “older breast cancer patients”. In this trial, 130 women with an average age of 64 were assigned to one of two groups – a group that practiced Transcendental Meditation and a group that received “standard care alone”. Over the course of 18 months, both groups were assessed using standardized questionnaires. The women who engaged in TM reported dramatic improvements in several areas: emotional well-being, overall mental health, quality of life and social well-being. The authors of the study offered the following concluding remarks. “It is recommended that this stress reduction program, with its ease of implementation and home practice, be adopted in public health programs.” (6)

Yet another form of meditation, referred to as Yoga of Awareness (YA), was recently examined in a similar context. The study, conducted at the Oregon Health & Science University, set out to determine whether this practice could help reduce treatment related side effects in breast cancer survivors. YA involves the use of breathing exercises, meditation and gentle yoga poses. Over the course of 8 weeks, a group of 37 breast cancer survivors with medication-induced hot flashes participated in a YA program. Notable benefits were found at the conclusion of the study. They included: reduced hot flash frequency and severity, lower levels of fatigue, joint pain, sleep disturbance and “symptom-related bother”. The participants also reported feeling more “accepted”, fewer negative moods, relaxed and vigorous. The positive outcome was still evident when the researchers performed a 3 month follow up. (7)

When we go to the doctor’s office, we’re often concerned about a number of issues. But the one thing we rarely consider is how the doctor is feeling. This may seem like an unusual matter to think about. After all, we probably don’t consider how our auto mechanic or real estate agent feels when we meet with them. But how a doctor and his nursing staff feel can profoundly affect how well they treat patients.

A study published in the September edition of the Journal of the American Medical Association offers hope for doctors who feel burned out and dispirited. A “before and after study of 70 primary care physicians” found that taking an 8 week course involving mindfulness meditation, followed by a 10 month “maintenance phase”, resulted in significant improvements in how the doctors felt and how well they cared for their patients. The physicians reported feeling less emotional exhaustion, more confident and empathetic. Improvements in emotional stability and mood were also detected. Recent studies involving both nurses and physicians have similarly found decreased anxiety and stress in those practicing various types of meditative exercises (mindfulness and “passage” mediation). The study involving “passage meditation” (also known as the Easwaran technique) concluded that this practice “enhances health professional care giving self-efficacy, and may merit inclusion in training curricula”. (8,9,10)

All of the types of meditation I’ve mentioned today differ from each other in some significant ways. Some of the practices suggest learning via professional instruction only. Others incorporate philosophical and spiritual elements. There are even some that allow you to modify the practice based on your own comfort. In my opinion, many types of meditation appear to be valid, so that the differences are not so important. I believe the key is to select a practice that has a good track record and can be reasonably incorporated into your daily life. To me, that’s what matters most.


11 Comments & Updates to “Meditation and Cancer”