South African geranium (Pelargonium sidoides) is a medicinal plant that is attracting a lot attention in the scientific community. This cold and flu season may be a good opportunity for this traditional herbal remedy to broaden its reach. There’s a great deal of attention and concern about the H1N1 novel flu virus these days. No one knows how much of an impact this current viral strain will ultimately have. But we do know that upper respiratory infections will certainly affect millions upon millions of people in the coming year alone. Therefore, I think it’s advantageous to know about as many safe and natural resources as possible. These immune boosting supplements may help protect us from the risks that we know about and those that may or may not come to pass. 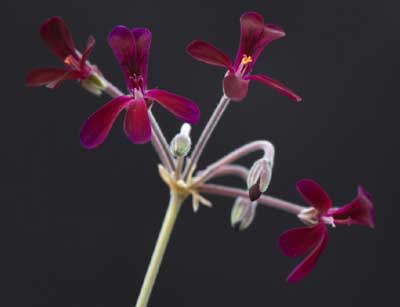 Pelargonium sidoides (EPs) continues to be used by natural practitioners in its native South Africa. In Europe it’s sold as a phytomedicine known as Umckaloabo. In the United States, it goes by the abbreviated name of Umcka. Both product names are derived from the African word “umKhulkane”, which translates to “respiratory infection”. True to its name, Umcka first gained recognition as a traditional treatment for pulmonary tuberculosis. Subsequent scientific research has lent merit to this historical application. (1,2,3)

The strongest scientific case for Umcka can be made with regard to bronchitis, an inflammation and swelling of the bronchial tubes that direct air to the lungs. Bronchitis often occurs at the conclusion of a cold or flu. It’s typically characterized by chest discomfort, difficulty breathing and sleeping, excessive mucous production in the airways, fatigue, fever (and chills), increased risk of lung infections and painful, prolonged coughing. A review examining the effects of Umcka in patients with acute bronchitis appeared in the May 2008 issue of the journal Phytomedicine. In the conclusion, the authors stated that “Umcka significantly reduced bronchitis symptoms in patients with acute bronchitis by day 7″. They went on to state that, “no serious adverse effects were reported”. Here’s an examination of some of the specific studies that were analyzed in the previous meta-analysis. (4)

Several trials conducted on Umcka were published in 2007. The largest of them involved 2,099 patients with acute bronchitis that featured a “productive cough”. The participants were given the Umcka extract for a total of 14 days. A standardized index known as the Bronchitis Severity Score (BSS) was used to determine changes in the degree of symptoms. On average the patients’ BSS scores dropped from 7.1 (at baseline) to 1.0 (after 14 days). An analysis that looked specifically at children’s response found a similar improvement – 6.3 (at baseline) and .9 (after 14 days). Children under the age of 3 demonstrated a BSS decline from 5.2 (at baseline) to 1.2 (after 14 days). There were no “serious adverse effects” reported and only 1.2% of the study volunteers complained of mild side effects. (5)

Two additional German trials were made public in March of 2007. Both of these scientific inquiries point out that antibiotics are often incorrectly used to treat acute bronchitis – which is mostly caused by a virus. This provides the basis for the search for a more acceptable and relevant remedy, such as Umcka.

A 2005 study presented in the journal Explore and a 2003 trial published in Phytomedicine similarly concluded that Umcka was considerably more effective than a placebo in promoting recovery from bronchitis. The latter study determined that the Umcka extract reduced “the severity of symptoms and shortened the duration of working inability for nearly 2 days”. The safety profiles in these two studies were comparable to the 2007 data – indicating only rare and minor complaints. (8,9) 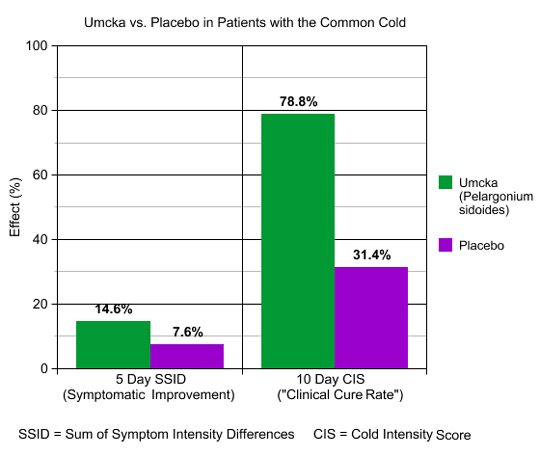 There are several other bacterial and viral conditions that appear to be responsive to treatment with Umcka.

Infections that affect other parts of the body also appear to be sensitive to the therapeutic activity of Umcka. Several laboratory studies indicate that it can help counter H. pylori damage. This is a bacterium that is responsible for causing ulcers and has been implicated in an increased risk of gastric cancer. Research is even being conducted to determine whether Umcka may one day be used to manage herpes infections. (12,13,14,15)

The manner in which Umcka combats bacteria, fungi and viruses appears to be twofold. It’s evident from numerous laboratory studies that this herbal medicine possesses potent “anti-infective” properties. However, there also appears to be a component that boosts immune function. These two factors combined could explain the faster recovery rates and symptom improvements found in the previously mentioned studies. (16,17,18,19)

In my opinion, the information currently available about Umcka is extremely promising. What sets this natural remedy apart from many others is a very strong track record of efficacy, as well as safety in both young children and adults. Scientists believe that the few reported side effects associated with the supplement may be due to rare allergic reactions. However, the potential for allergies exists with all foods and herbs. Another appealing aspect of Umcka is its relatively affordable cost. A 14 day course of the extract will generally set you back less than $20, especially if you shop for it online. The next time I feel a cold or flu coming on, I’ll probably reach for a bottle of Umcka. You might consider doing the same. (20,21,22)