Bees are invaluable members of the ecosystem. The sustainability of many of the foods we eat is directly dependent upon the pollination provided by these incredibly productive insects. The prospect of being stung by a bumble bee or a European honey bee is quite another story. We avoid being in close proximity to bees and hives because of this very concern. Some people are understandably fearful of the pain associated with stings. A much smaller segment of the population has yet another reason to fret: allergic reactions to bee venom. There are however certain individuals who seek out bees for the express purpose of getting stung repeatedly. 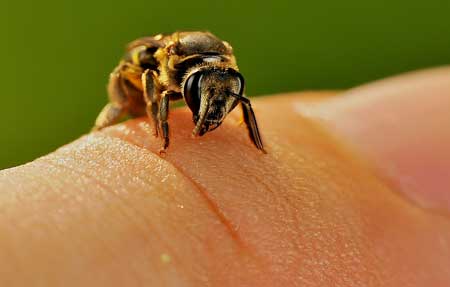 Apitherapy is a term used to describe the therapeutic use of bee products. It may seem counterintuitive that bee venom could, should or would be used in any healing capacity. However, there is a chemical basis for this traditional form of treatment. A summary in the current issue of Apitherapy Review explains that bee venom possesses “a strong influence on the nervous and circulatory systems”. The author of the piece, Prof. Roch Domerego, goes on to summarize a host of other documented benefits that include anti-inflammatory activity and immune system support. (1,2,3)

There are many anecdotal reports of dramatic healing via apitherapy. A letter published in the November issue of Natural Health magazine is one of the most recent, publicized cases of bee venom success. In it, the wife of a multiple sclerosis (MS) sufferer explains that her husband has been using bee venom therapy (BVT) “to decrease the frequency, strength, and duration of his (MS) flare ups, and to increase his energy levels”. This letter to the editor piqued my interest. I wondered what scientific evidence exists that supports the use of medical apitherapy. Here’s what I found:

Both osteo and rheumatoid arthritis appear to be somewhat responsive to bee sting therapy. A study from June 2008 determined that a combination of apitherapy and conventional medication lead to statistically better outcomes in a group of 50 patients with rheumatoid arthritis. Greater declines in pain, stiffness and swelling were among the benefits noted. There was also a significant drop in the “relapse rate” in those using bee venom (12% vs 32%). A 4 week trial in patients with osteoarthritis used “pain relief scores and computerized infrared thermography” as a means of evaluating the success rate of apitherapy. In this case the bee venom prevailed over a course of “traditional needle acupuncture”. In addition, a March 2005 review in the journal Evidence Based Complementary and Alternative Medicine examined the results of 15 trials focusing on bee venom acupuncture (BVA) and arthritis. The conclusion was that more research was certainly called for but that “it is highly likely that the effectiveness of BVA for arthritis is a promising area of future research”. (4,5,6)

Administering bee venom to well established acupoints (relevant acupuncture locations) may be partially responsible for the success of these therapies. A study in an animal model discovered that injecting bee venom into therapeutic acupoints resulted in greater pain reduction as opposed to the same treatment given in “non-acupoint” injection sites. Furthermore, an April 2008 meta-analysis in the Journal of Pain investigated the efficacy of bee venom acupuncture in conditions such as “arthritis, pain and rheumatoid diseases”. A total of 11 randomized clinical trials was the basis for the review. The authors concluded that the “results provide suggestive evidence for the effectiveness of BVA in treating musculoskeletal pain”. (6,7,8)

The newest human study available on apitherapy involves its use in managing low back pain. A total of 150 patients with “chronic lumbar muscle strain” participated in the trial. Half were provided with routine acupuncture, while the remainder was treated with diluted bee venom in the same acupoint locations. All of the patients received a total of 30 sessions of the respective acupuncture modalities. Six months later, both groups were analyzed to establish treatment outcomes:

Bee Venom (BV) vs. Arthritis in an Animal Model

Perhaps the most controversial application of apitherapy is in patients with multiple sclerosis (MS), an autoimmune condition which causes nerve damage and, thereby, interferes with the brain’s ability to communicate with the body. According to an article in the September 2007 edition of Neuropharmacology, there is a “renewed interest in the therapeutic potential of venoms in MS”, but the “efficacy of this therapeutic method remains unclear”. The uncertainty has a lot to do with: a) mixed results in a limited number of scientific studies and; b) numerous anecdotal reports of successful treatment. (10)

For all intents and purposes, there are two human studies that are available for evaluation. The first was published in December 2005 in the journal Neurology. A group of 26 patients with MS underwent 24 weeks of bee sting therapy or no therapy on separate occasions. MRIs were used to determine the number of MS-related brain lesions prior to and after each phase of the study. Various standardized scales were also employed to measure disability, fatigue, relapse rates and quality of life. The bee sting therapy involved 3 sessions per week with a maximum 20 stings per appointment. At the end of the “crossover” study, the researchers concluded that there was no benefit found during the apitherapy phase of the study. The bee venom didn’t improve MS symptoms nor slow down disease progression or relapse time. (11)

Another study from 2005 found slightly more encouraging results. Researchers from Georgetown University tested the efficacy and safety of a bee venom extract in 9 patients with MS. 4 of the 9 patients dropped out of the study before its completion. However, of the 5 remaining participants, 3 reported “subjective” symptomatic improvements. 2 of the MS patients demonstrated objective measures of disease improvement – based on “functional neurological tests” and standardized questionnaires. The authors of this experiment concluded that “this preliminary study suggests safety”, but went on to add that “larger and more carefully controlled multicenter studies will be required to establish efficacy”. (12)

Scientists such as Dr. Robert Zurier of the University of Massachusetts Medical School have been studying bee venom for over 30 years. Because of his efforts and the valuable contributions of others, the underlying mechanisms by which bee venom “works” is becoming clearer. However, the march of progress is far too slow for those who are suffering here and now. There is a desperate need to establish how and why apitherapy is effective for some people with presumably “incurable” and/or “unresponsive” conditions. Until that day comes, it’s important for us as health care consumers to weigh our options very carefully. Please be aware that bee venom therapy is a largely unregulated practice. Therefore, I think it’s absolutely vital to seek out the best possible references before giving it a shot. (13,14,15)