One of the things I enjoy most about studying natural medicine is that it constantly exposes me to concepts and cultural details that I otherwise might not learn about. Throughout the world there are scientists who choose to devote their lives to very specific aspects of health. Some focus on the causes and prevention of cancer. Others examine how certain diet plans affect body weight. Perhaps my favorite area of research is the investigation of foods and therapeutic practices that are deeply ingrained in a particular part of the world. For instance, it’s no accident that much of the research on olive oil is conducted in Mediterranean countries or that experiments involving acupuncture are predominantly carried out in the Far East. 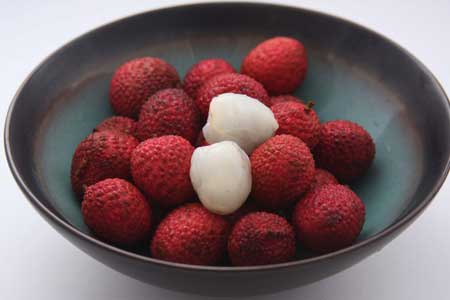 The first stop in today’s world tour is Japan. A new study in the Journal of Functional Foods provides evidence that a combination of lychee fruit and green tea may help combat abdominal obesity. Lychee (Litchi chinensis) is a delicious tropical fruit that has a long and revered history in Asia. It was first mentioned in Chinese literature in 1059 A.D. From a nutritional standpoint, modern analysis indicates that this fruit is a rich source of potassium and Vitamin C. In addition, researchers are currently investigating lychee’s potential in combating conditions ranging from breast cancer to diabetes. (1,2,3)

18 adults with a “waist circumference over 85 cm” were recently enrolled in a pilot study using a lychee/green tea supplement known as Oligonol. The age range of the participants spanned from 24 – 59 years. Half of the group was given 50 mg of Oligonol twice daily for 10 weeks. The remainder of the volunteers received an inactive placebo. Blood tests, CT scans (X-rays) of the abdomen and physical exams were performed pre and post study. Those receiving the lychee/green tea extract lost approximately 3 centimeters in the waist region. There was a 15% “reduction in abdominal (visceral) fat” and a 6% “reduction in subcutaneous fat area”. An improvement in insulin sensitivity and adiponectin levels were also recorded. These changes are indicative of improved blood sugar control and a lower risk of cardiovascular disease and/or metabolic syndrome.

Another study from November 2009 demonstrated that this same lychee fruit extract improved “fat burning” (lipolysis) in an animal model. Furthermore, a September 2009 experiment in humans found that a “green tea meal replacement formula” resulted in significant weight loss in a group of “120 healthy, overweight and obese” volunteers. The authors of that study noted that green tea promoted substantial fat loss and a decline in LDL (“bad”) cholesterol as well. (4,5,6)

Our second stop on the map is the United States of America. One of the most serious medical problems that this country faces is an obesity epidemic. Perhaps the biggest obstacle to overcoming this health crisis is the ability to stick to a diet plan over the long term. A few new studies from North American universities offer a unique alternative to conventional dieting.

Researchers at the University of Chicago propose using a technique known as “alternate-day fasting” in overweight and obese individuals. They recently conducted a 10 week experiment involving 16 obese patients of both genders with ages between 35-65. The volunteers were asked to eat and exercise as they normally would for two weeks, this is considered the “control phase” of the study. During the next 4 weeks the participants ate normal meals for one day and did a modified fast on the following day, which consisted of a large meal that provided only 25% of their typical daily caloric intake. The final four weeks of the study allowed the volunteers to eat however they chose. They were asked to meet with a dietitian, but the actual menu selection was left up to them. This final stage was set up to determine whether the participants could and would continue with the alternate-day fasting approach. Most of them did.

The researchers noted that it required most of the volunteers about 2 weeks to adapt to this unconventional diet plan. After that point, hunger levels dropped on the fasting days. A recent animal trial conducted at the University of California at Berkeley discovered that such a diet specifically decreases the level of visceral fat (fat that surrounds bodily organs) and increased adiponectin levels. (7,8)

There’s even more good news about alternate day fasting (ADF). A recent review in the American Journal of Clinical Nutrition explains that preliminary human studies suggest that ADF may play a role in the prevention of cancer, cardiovascular disease and type 2 diabetes. These are several of the leading causes of mortality worldwide. (9)

The final stop on this ride is Malmo, Sweden. Researchers from the Clinical Research Center at Lund University are excited about a traditional herbal formula which may help in the fight against invasive prostate cancer. This natural medicine is known as TBS-101 and is comprised of chamomile, cranberry, grape seed, grape skin, reishi mushroom (Ganoderma lucidum) and Panax ginseng. This herbal blend has recently shown potent anti-cancer activity in both human prostate cancer cells and in animals with prostate tumors. The authors of the research summarize their findings by saying that “TBS-101 has a good safety profile and significant anticancer activities in hormone-refractory PC-3 cells and large aggressive PC-3 tumors”. They go on to add that it appears to have “great potential for the treatment of aggressive prostate cancer”. One of the chief ingredients in TBS-101 is chamomile. A new trial published in the journal Life Sciences describes “novel” anti-inflammatory properties in chamomile that may be partially responsible for its chemoprotective effects. A previous experiment from 2007 also supports chamomiles ability to combat cancer spread and to selectively destroy malignant cells. (10,11,12)

I was recently contacted by a unique charitable organization known as “Movember”. They’re a non-profit organization that is raising funds for cancer research. The money raised is shared by the Prostate Cancer Foundation and the Lance Armstrong Foundation. Thus far, Movember has raised over $47 million worldwide to help promote prostate and testicular cancer awareness and research. Here’s the fun part about their efforts – instead of asking volunteers to walk a marathon for donations or wear a ribbon, they’re asking clean shaven men to grow a moustache for the entire month of November. Men who already have facial hair are asked to shave off their beards and moustaches for a month! If you’d like to learn more about Movember, please visit their website. If you decide to donate to the cause, please let them know that you’re a Healthy Fellow reader and they’ll send you a complementary t-shirt or other memento as a token of appreciation. Please note that I’m not receiving any compensation or favors by mentioning this. I just think it’s a good cause and it might be a fun thing for some of you to consider.