One of the top news stories of this past week involved a proposed change in the current breast cancer screening protocol. Mammograms have been generally recommended for all women 40 years and up. However, new guidelines announced by the U.S. Preventive Services Task Force now suggest that routine testing begin a decade later, at age 50. At the moment there is a passionate debate about whether or not this recommendation and others, such as only having a mammogram every two years instead of one, would result in equivalent or improved health outcomes in older women. But controversy is no stranger to the field of breast cancer research. The topic of breast cancer prevention is perhaps the hottest issue in this category. Some experts are confident that dietary and lifestyle factors can, in fact, impact the odds of a women developing breast malignancies. Other researchers subscribe primarily to the notion of “genetic destiny”. In their minds, whether you get cancer or not is a essentially a roll of the dice. If you happen to have a family history of breast cancer, the dice are loaded against you. 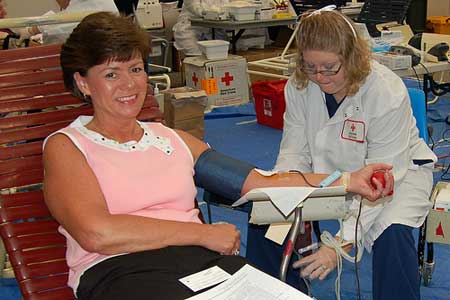 A relatively new piece in the breast cancer prevention puzzle is beginning to come to light. A study just published in the Journal of Clinical Biochemistry and Nutrition is the latest to point out an apparent link between elevated iron levels and an increased risk of breast cancer (BC). Korean researchers examined the iron status of 121 women with BC and compared those findings with those of 149 healthy volunteers. Iron concentrations were determined via blood tests and food frequency questionnaires. The scientists discovered that – a) healthy females consumed lesser quantities of non-heme (“plant-based” iron) and total iron; b) blood levels of iron were dramatically elevated in the participants who were diagnosed with BC; and c) a marker of oxidative stress known as malondialdehyde (MDA) was also significantly higher in the BC patients. The researchers decided to measure MDA levels because excess iron is known to generate “reactive oxygen species” (pro-oxidants) which may damage healthy tissue and ultimately contribute to aberrant cellular changes. The authors of the study remarked as follows: “These results suggest that serum iron overload may be a breast cancer risk factor possibly due to increased oxidative stress”. (1)

Two observational studies conducted at the Oregon Health and Sciences University and the National Cancer Institute have also recently taken notice of the association between iron and breast malignancies. The Oregon-based scientists specifically looked for such a connection in two densely populated countries – China and United States. They noted that the modern Chinese diet is quickly following the lead of current US dietary trends. This way of eating is sometimes referred to as the “standard American diet” or “SAD”. Perhaps because of this dietary shift, many Chinese are now being diagnosed with iron overload. In the past, it was much more common for them to have an iron deficiency. The details of the study are as follows:

The research from the National Cancer Institute evaluated iron intake in a much larger group of middle-aged and senior women. Links to other forms of cancer such as colorectal, lung and ovarian cancer were also examined in this trial. Of the 52,158 women participating in the study, a total of 1,205 had invasive breast cancer. Food frequency questionnaires were used to determine the iron consumption of all the participants. It was determined that higher dietary iron intake contributed a 25% greater risk of BC. In fact, the researchers found iron to be the only dietary factor tested for that showed a “linear trend” in relation to breast cancer occurrence. (3)

A paper presented in the August 2008 edition of the journal The Lancet Oncology proposes an underlying mechanism by which iron overload may be influencing BC risk. The author of that study suggests that breast cancer rates increase after menopause because this a time when women no longer menstruate. The regular loss of blood, via a woman’s monthly cycle, helps to reduce iron concentrations. Excess iron is left unregulated in older women and may then contribute to increased oxidative stress which could promote breast cancer. What’s more, London based researchers have even determined that certain minerals, such as iron, tend to concentrate more heavily in sensitive tissues that are “correlated with areas of cancer cells”, such as the breasts. (4,5)

This brings up the unique possibility of utilizing blood tests to rule out iron overload. The words “blood test” are paramount here. There are alternative tests that measure iron concentrations in human hair. However, these tests do not appear to be useful in measuring iron status relating to breast cancer. In fact, a recent hair analysis study in women with breast cancer found that they generally exhibited low levels of iron. (6)

Pre and Postmenopausal Changes That May Influence Breast Cancer 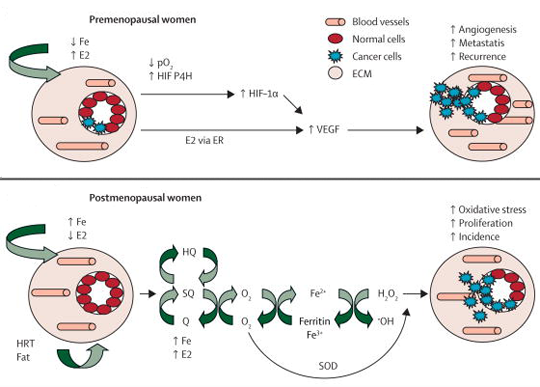 There are several effective ways to lower iron while at the same protecting against breast cancer. The first and most highly recommend avenue is regular exercise. A study from April 2008 found that frequent physical activity can significantly lower serum iron levels without increasing the likelihood of anemia or iron deficiency. An earlier trial conducted exclusively on female military personnel during various stages of physical training found that they consistently “experience diminished iron status following training”. Some researchers go as far as recommending that “recreational athletes should be screened for iron deficiency without anemia” because of the profound effect that physical exertion can play on iron stores. This leads to a rather provocative question: Is a reduction in iron levels part of the reason why female exercisers tend to exhibit lower breast cancer rates? (7,8,9,10,11,12)

Another excellent way to naturally reduce serum iron is by donating blood. Modern research indicates that giving blood on a regular basis not only reduces iron concentrations but may also decrease oxidative stress. Once again, the theory behind this observation takes us back to the “iron as a pro-oxidant” theory. But there may also be another explanation. A trial from 2005 draws a link between frequent blood donations and increased insulin sensitivity. Poor blood sugar control and insulin resistance are considered other risk factors associated with BC incidence. (13,14,15)

A third option worth considering can be accomplished via diet and/or supplementation. A substance known as phytic acid or IP-6, which is primarily contained in fiber-rich foods, is known to lower iron in the body and counter the associated free radical damage and inflammation induced by the mineral. IP6 in an isolated/supplemental form has even been shown to directly kill breast cancer cells and inhibit their spread while leaving healthy cells intact. In addition, preliminary research indicates that IP6 may be a suitable complementary therapy that can be used along with conventional breast cancer options such as adriamycin and tamoxifen. (16,17,18)

I’m not in any way trying to paint iron as some sort of dietary villain. It is after all an essential mineral that we cannot live without. A lack of iron can bring about a host of unwanted side-effects including brittle nails, fatigue, hair loss, headaches, irregular heartbeat, poor circulation and immune function and restless leg syndrome. I think the take home message here is to consider having your iron levels tested – especially if you have reason to believe you’re at an increased risk for breast cancer. Experts don’t always agree about whether breast cancer prevention is possible. But there’s no disputing that prevention is preferable to treatment. Only time will tell whether this iron-breast cancer link will one day become an established and modifiable risk factor in the prevention and treatment of BC. Until then, you have the option of considering this information and using it proactively. Having enough iron in your system is vital but there’s simply no need nor benefit to having an overload.