My wife and I had a rather interesting experience over this past holiday. We had the good fortune of being invited to the home of a famous restaurateur. While there we toured his personal and fully sustainable garden and farm. Two things struck me about this unique encounter. The first was the obvious joy that this gentleman exhibited while giving us a tour of his own private paradise. It reminded me, in the best possible way, of the enthusiasm that children display when they’re genuinely excited about something that’s important to them. The other thing that captured my attention was that his young children were keenly aware of the fate that would ultimately befall the chicken, pigs and other animals that live on their farm. They clearly understood that their food was not coming from a package in the refrigerated section of a supermarket, but rather from the land itself. I understand that some people may find the last few sentences objectionable. However I firmly believe that if we decide to eat an omnivorous diet, then we must come to terms with all that it encompasses. This family not only understands that point of view, they live it. 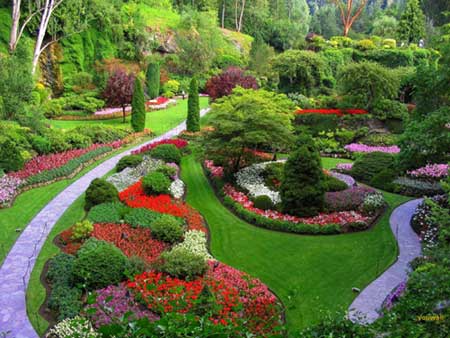 If I had to choose just one philosophical point that most directly impacts health it would be this: Wherever and whenever practical, we should “get back to our roots”. I’m not suggesting that we abandon the comfort and convenience of all modern technology. But I do think it’s important to understand what has sustained us in our relatively brief history on this planet: the air we breathe, the food and water that nature provides and the sunshine that lights our days. I find it nearly impossible to believe that technology can ever replace the essentials of biological existence with advancements made in laboratories and test tubes. At our core we are natural beings and we require exposure to nature in order to thrive.

One of the best examples of this philosophy in practice is a form of “treatment” known as horticulture therapy – the use of a garden environment to promote mental and physical wellness. Much like many other natural therapies, gardening seems deceptively simple. However, scientists are finding that exposure to fresh air, green surroundings, a peaceful environment and the wildlife that inhabits it can profoundly improve medical outcomes, reduce patient suffering and health care spending. What’s more, some of the benefits of horticulture therapy also appears to extend to the “healers” that care for those in need. (1,2,3,4,5,6,7,8)

Today’s column focuses on the two most vulnerable segments of the population – children and seniors. Please note that the information presented here also applies to people living somewhere between the dawn and twilight of life. Before I begin I want to dispel the notion that gardening and horticulture therapy are primarily helpful because they encourage individuals to be more active. Not only do I personally disagree with this position but, more importantly, the results of a recent study from The Netherlands refute this as well. The trial I’m referring to was published in June 2008 in the journal BMC Public Health. The conclusion of that inquiry pretty much says it all, “the amount of physical activity undertaken in greener living environments does not explain the relationship between green space and health”. (9)

What if I told you that I had developed a supplement that was clinically proven to make kids want to eat more fruits and vegetables? Would you believe me? Probably not. I wouldn’t believe that claim either. But the findings of several studies do, in fact, show that exposing children to a “garden-based education” can accomplish that seemingly impossible feat.

One scientific review and four studies in 2009 alone prove that time spent in a garden setting not only increases vegetable intake, but it also changes the attitude of children toward fruits and vegetables. In addition, it tends to promote a greater willingness to try new foods. But the education that is received during such training goes far beyond expanding one’s palate and improving nutrition. It’s also an effective way to teach respect for the environment, scientific principles and a unique set of social skills. In general, children who participate in these types of programs report “high levels of enjoyment in the intervention activities” and often express more interest in learning how to prepare the food that they help grow. Establishing these kinds of taste preferences and life skills will likely support better health for a lifetime to come. A group of scientists from Auburn University recently remarked that “school gardens as a component of nutrition education can increase fruit and vegetable knowledge and cause behavior change among children” and that “educators should implement school gardens as a way to positively influence dietary habits at an early age”. (10,11,12,13)

It’s unrealistic to expect most schools to establish garden based educational programs in a time of rampant economic hardship. But there are many private and public organizations that already offer horticulture therapy projects outside of the confines of school grounds. Information about these sorts of programs can be found online through non-profit organizations such as The American Horticultural Therapy Association. (14)

In the course of studying today’s topic, I came across a relatively new therapeutic modality referred to as a “wander garden” – a specially created natural habitat that affords seniors with special medical needs a safe way to spend time outdoors communing with nature. These gardens are intended to provide a soothing environment that includes carefully “designed paths” that are enriched with pleasing, fragrant flowers and visual stimuli. To date, there have been three peer-reviewed, published studies evaluating the effects of this type of treatment setting. Thus far, it appears as though wander gardens can:

I feel that it’s important to note that these findings are coming from research facilities throughout the world. This does not seem to be culturally or geographically influenced in any way. One example is a pilot study that was performed at the Department of Nursing at Woosuk University in Korea. In that trial, 23 “institutionalized dementia patients” suffering from agitation and poor sleep took part in a 5 week gardening program. Post study evaluations (Modified Cohen-Mansfield Agitation Inventory and Hasegawa Dementia Scale) determined that this form of therapy “was found to be effective for sleep, agitation and cognition of dementia patients”. Another recent Australian experiment specifically pointed to gardening as an effective way to ameliorate loneliness in seniors. This is particularly relevant because numerous scientific studies have identified loneliness as a major contributor to poor health outcomes in this population. To tie this all together, it has recently been discovered that spending more time in “green spaces”, such as gardens, helps to promote a greater sense of social connectedness and discourages feelings of loneliness. (18,19,20,21,22)

I came across a quote from Thomas Jefferson that summarizes today’s column more eloquently and succinctly than I ever could. “Though an old man, I am but a young gardener”. The more I explore the human condition in relation to medicine, the more I become convinced of the similarities between those of advanced age and those just starting out in life. Beyond that, the very things that nurture us in sickness are generally the things that help keep us well in the first place. Along the way many of us become distracted from what the body, mind and spirit truly require. The sooner we remember those things and reintroduce them into our lives, the more likely we are to invite back good health.


13 Comments & Updates to “Gardening for Health”