Nutritionists generally concede that there are healthy ways and unhealthy ways of implementing almost any type of diet. There are obviously different points of view about what an optimal menu plan looks like. But ultimately, it’s understood that everything from a vegan diet (no animal derived food) to a ketogenic diet (very in high fat, very low in carbohydrates) can be made healthier by choosing the best dietary options within each diet’s framework. You’ll be hard pressed to find a vegetarian advocate who suggests eating meals consisting of potato chips and mixed cocktails or a low-carb authority who recommends pork rinds and diet soda for breakfast, lunch and dinner. 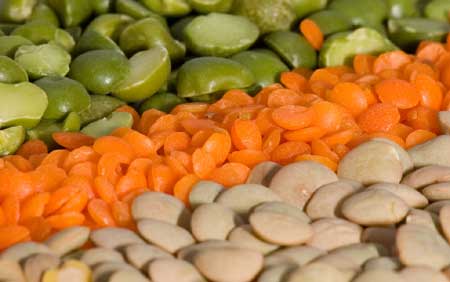 There’s an issue that all natural health writers must confront at one time or another: How to report on health topics that you don’t personally endorse. My answer to that question is simply to report the facts as I see them in an appropriate context. I then add my own opinion and include additional suggestions about how I believe the information can be best put to use.

By and large, I don’t go out of my way to include legumes (beans, carob, lentils, peas, etc.) in my diet. The one exception to this unofficial rule are peanuts and peanut butter. I choose to avoid this class of fruit because I don’t digest them very well. Also, they wouldn’t really add much value to my nutrient-dense diet. However, this doesn’t preclude me from sharing studies that document the positive health effects of legumes and offering some practical tips about how to derive the greatest possible benefits from this food source while minimizing some of the potential downside.

Scientists from the Agricultural Research Service at the United States Department of Agriculture have just reported that “dark-roasting” peanuts (with their skins on) increases levels of phenolic antioxidants. This may seem counterintuitive to those who believe that raw food is always healthier. In this case, the browning process, which consisted of roasting the legumes at 362 degrees F for 77 minutes, also resulted in larger concentrations of Vitamin E as compared to lightly roasted and raw peanuts. (1)

Another legume, the humble soybean, is the topic of a new study presented in the December 9th edition of the Journal of the American Medical Association. The published trial is based on a population study on over 5,000 Chinese women with a history of breast cancer. The participants were of varying ages (20 – 75) and were monitored for an average of 3.9 years. Interviews and food frequency questionnaires were employed to measure typical soy intake.

It’s also interesting to note that the benefits of soy applied to women with both estrogen receptor-positive and negative forms of breast cancer. The use of conventional medications, such as tamoxifin, didn’t appear to affect the protection afforded by soy. (2)

If you look at the official US Department of Agriculture’s “food pyramid” you’ll notice that they strongly support the greater consumption of dry beans and peas. They believe this will help a great many people by adding “higher intakes of fiber, protein, folate, zinc, iron and magnesium with lower intakes of saturated and total fat”. This is in alignment with the rather antiquated view that low fat diets are ideal for overall health and weight loss/maintenance. I won’t address that debate today. However, I will tackle other important considerations for those who choose to include substantial quantities of legumes in their diets. (3,4,5)

Legumes contain a substance known as phytic acid, an “antinutrient” which can impair the absorption of dietary minerals. This is part of the reason why mineral-rich legumes are rarely recommended to address nutrient deficiencies. There are also certain carbohydrates in soy and other beans (alpha-galacto-oligosaccharides) that aren’t digested well by many. This is what often causes bloating and gas after eating such foods. But the good news is that there are some natural ways to improve both of these pitfalls. Researchers are finding that the selective use of fermentation (with probiotics) and germination (sprouting) can dramatically improve the health benefits of legumes, while also allowing for them to be better tolerated. (6,7,8,9,10,11)

The issue of food allergies and/or sensitivities to legumes is another important consideration. Scientists are addressing this by determining the optimal ways of cooking, growing and processing legumes in order to decrease the likelihood of immune reactivity. A fascinating example appears in a recent experiment conducted at the Rio Hortega University Hospital in Valladolid, Spain. There, a group of researchers discovered that adding vinegar to the cooking process can help minimize the allergenic potential of lentils. It’s possible that the organic acids in vinegar work to breakdown some of the more difficult to digest components found in legumes. (12,13,14,15,16,17,18)

Foods affect us in a very individualized manner. Even the healthiest foods are not appropriate for everybody. Broccoli is truly a “super food”, but not for those who are allergic to it. The same is true of other more commonly allergenic foods such as chicken, cocoa, eggs, nuts, etc. All of these are nutrient dense and wonderfully health promoting for the majority of people. But there’s no arguing with your own body if it reacts in a negative way. I think this is this most important principle with regard to legumes. There is simply too much positive evidence to disregard it offhandedly. Therefore, if you have a good reason to eat legumes, do so, but pay close attention to how they impact your health – blood sugar, digestion, energy, mood, sleep, etc. You may be pleasantly surprised to find that they’ll enrich your diet and your life. On the other hand, it could be that you’re one of those people (like me) who finds it best to continue eating them sparingly.


11 Comments & Updates to “Are Legumes Healthy?”