A few years ago I went on a 7-day cruise to the Mexican Riviera with my family. By all accounts it was destined to be an experience where many fond memories would be formed. We were surrounded by exotic and picturesque locales. The time spent on land and sea could not have been more restful and restorative. Even the food was surprisingly good. But coming back home was a completely different story. By that, I’m not referring to an endless barrage of choppy waves or otherwise tumultuous weather conditions. The problem was my stomach. The following two weeks were crowded with digestive issues, the likes of which I’d never encountered before. My state of health was so volatile and unpredictable that I was afraid to leave the house. I simply couldn’t rely on my “insides” to cooperate with my “outer” plans. 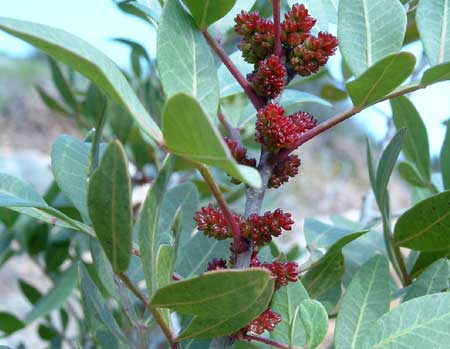 Thankfully, this digestive whirlwind eventually passed and never came back. However, for some people, gastrointestinal problems are a sobering reality that isn’t so short lived. A condition known as functional dyspepsia (FD) falls into this category. Those with FD suffer from one or more of the following characteristics: a) an inappropriate feeling of hunger satisfaction during meals; b) a feeling of “fullness” long after eating and; c) burning or pain in the middle/upper abdominal area (the epigastric region). One of the more perplexing aspects of this condition is that it is marked by “no evidence of structural disease that is likely to explain (these) symptoms”. (1)

A new study published in the Journal of Ethnopharmacology offers renewed hope for many who suffer from chronic digestive upset. An extract from a Mediterranean tree known as mastic (Pistacia lentiscus var.chia) was recently shown to reduce symptoms in those who suffer from functional dyspepsia. 148 patients with FD were given either 350 mg of mastic gum three times daily or a similar looking placebo. The Hong Kong Index of Dyspepsia was used to quantify GI symptoms at the beginning and end of the 3 week trial. (2)

If haven’t previously heard or read about mastic, you’re not the only one. Mastic gum is a natural medicine/supplement that isn’t very popular in most parts of the world. In fact, much of the research conducted on it comes primarily from educational institutions in Greece. In the Mediterranean region, mastic trees are not only easily identifiable, but are also frequently used to address all sorts of digestive and oral health issues. The study I just reported on and a trial from 2007 lend some significant support to the traditional use of this tree resin. In 2007 a group of scientists from the University of Athens examined the effects of mastic gum capsules on an inflammatory bowel condition known as Crohn’s disease (CD). The symptoms of CD can be quite devastating and generally manifest as abdominal pain, cramping, malnutrition, severe diarrhea, ulcers and weight loss. (3)

In this particular study, 10 patients with Crohn’s disease and 8 healthy “controls” were all asked to take 6 (370 mg) capsules of mastic gum per day for 4 weeks. A Crohn’s Disease Activity Index, a Nutritional Risk Index and various blood tests relating to CD were taken prior to and post study. (4,5)

I was also able to uncover two peer reviewed, medical studies on mastic from the 1980’s. An investigation from 1986 found that 500 mg/kg of mastic “produced a significant reduction in the intensity of gastric mucosal damage” and demonstrated “clinical effectiveness of mastic in the therapy of duodenal ulcers” in an animal model. In 1984, a study involving 38 human patients with duodenal ulcers revealed that 1,000 mg daily of mastic given for 2 weeks provided symptomatic relief to 80% of the test subjects. More importantly, 70% of those using mastic showed “proven healing” verified by an endoscopy. The treatment was well tolerated and didn’t not cause any side effects. (6,7)

There isn’t a consensus yet about how mastic is working its apparent “magic”. Scientists have identified several anti-inflammatory and antioxidant substances within mastic gum that may be partially responsible for its modern and traditional reputation. What is also known is that mastic appears to combat a pathogenic bacterium by the name of Helicobacter pylori, which is known to promote chronic gastritis (inflammation in the stomach) and the majority of ulcers. But it’s also interesting to note that some researchers have found that mastic isn’t an effective H. pylori treatment. The results of several clinical studies have produced decidedly mixed results in this arena. This raises the possibility that mastic possesses activity against other pathogens that could be upsetting the digestive system. For instance, preliminary evidence indicates that mastic gum is capable of reducing certain harmful microbes that are present in the mouth which can result in cavity formation, gum disease and malodor (bad breath). (8,9,10,11,12,13,14,15,16,17)

The safety of this naturopathic medicine has been examined in one rather lengthy human trial and in a few animal studies. The human study involved 133 senior volunteers who received either a “low-dose” of mastic or a “high-dose” (5 grams of mastic gum daily). Monthly blood tests were conducted on both groups. The high-dose mastic group was followed for a total of 18 months. The researchers found reductions in LDL (“bad”) cholesterol, total cholesterol and lipoprotein (a) in the 5 gram group. These are considered positive cardioprotective changes. In addition, there were signs of improvements in liver function as indicated by a drop in several key liver enzymes. Those using the lower-dose mastic exhibited a decrease in blood glucose levels, but only in males. This trial is very useful because there have been a few animal studies that questioned the safety of mastic on the liver. It could be that the dosage used, the duration of the experiments or physiological differences among humans and rats account for this discrepancy. (18,19,20)

One of the things that I love best about natural medicine is that it makes the world a smaller place. In the 21st century, Greek, Japanese, Korean and Turkish scientists are largely responsible for spreading the word about a tree that may help patients resume a more normal way of life. Imagine the freedom that such a remedy could provide to those who can’t currently eat and function without first consulting their digestive system. Fortunately, I think this is one of the areas where alternative and complementary therapies can truly shine – in the management of chronic conditions. I’m very encouraged to see new research emerging about mastic and to also read that well-respected health authorities such Dr. Leo Galland are recommending it to their patients. This is a tremendously hopeful sign that the times are changing for the better. (21)