The best way for me to learn is to understand the logic behind a lesson. I need to comprehend not only what is happening, but why. This helps me quite a lot when it comes to the study of natural medicine and nutrition. It’s not enough for someone to tell me that fruits and vegetables protect against cancer or that exercise “does a body good”. I have to be aware of the mechanisms that justify such statements. Very often, these explanations are based on incomplete information and, therefore, need to be modified over time. But even so, at least they provide a reasonable underpinning upon which one can hang a concept. 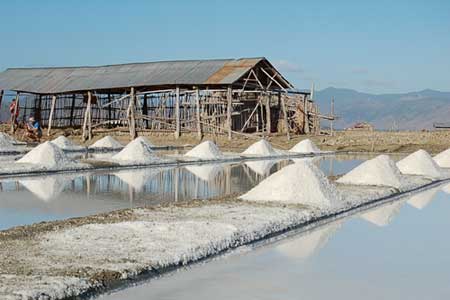 Ordinary table salt is a common villain in the field of cardiology. You’ll often hear experts recommend limiting sodium intake by reducing consumption of processed foods and using a lighter hand with the salt shaker. But for whatever reason, the message isn’t getting across very well. This is evidenced by the ever increasing sodium content found in many commercial foods and by the excessive levels of sodium consumed by many populations. In addition, there are even some unconventional nutritionists and physicians who believe that sodium has unjustly received a bad reputation. That’s why I’ve decided to review the latest scientific data relating to salt intake and human health in today’s column. (1,2)

2009 began with an intriguing study which forms the foundation for my personal view of this topic. In essence, it discovered that the level of sodium in one’s body is less of an issue than the “sodium to potassium” ratio. Higher levels of sodium and lower levels of potassium appeared to play a significant role in the incidence of cardiovascular disease in two separate trials involving almost 3,000 participants. It’s important to note that the levels of these essential minerals were quantified by measuring urinary output. This is a more accurate testing method than what has typically been used in the past. (3)

The DASH diet (Dietary Approaches to Stop Hypertension) is perhaps the most popular nutritional approach for addressing the cardiovascular effects associated with the over consumption of sodium. This particular menu plan is rich in fresh fruits and vegetables, low-fat dairy products and whole grains. The DASH program also suggests avoiding most processed foods, saturated fat and sugar. A study in the October 2009 issue of the Journal of Human Nutrition and Dietetics applied this specific diet to a group of volunteers from the United Kingdom. Oxford researchers asked 14 healthy participants to eat a DASH-style diet, which was “adapted to fit UK food preferences and portion sizes” for a 30 day period. Blood pressure readings and food diaries were collected at the beginning and end of the trial. The results indicate the following:

A newly released study presented in the Journal of Human Hypertension goes on to add an important detail to the DASH story: this diet not only lowers blood pressure, but can also decrease oxidative stress and “vascular stiffness”. This lends credibility to the hypothesis that a lower-sodium, higher-potassium diet may actually preserve the condition of the cardiovascular system via improved arterial health. (4,5)

Another trial from October 2009 found that older adults (aged 48-73) on low sodium diets demonstrated substantially better circulation as assessed by a test known as “brachial artery flow-mediated dilation”. The authors of that research concluded that “dietary sodium restriction may be an effective intervention for improving vascular endothelial function”. A presentation in the December issue of the American Journal of Hypertension contributes yet another piece to the sodium/high blood pressure puzzle. Scientists from Tulane University School of Public Health commented that their research “suggests that individuals who were more sensitive to a high sodium diet might benefit more from a low sodium and/or high potassium intervention aimed at lowering BP levels”. This may give salt sensitive patients a most welcome option: either lower dietary sodium or, at least, increase dietary sources of potassium. (6,7)

A shift to a more balanced sodium to potassium ratio isn’t a modern discovery at all. In fact, it’s more of a “blast from the past”. A recent review from the McGill University School of Dietetics and Human Nutrition focuses on the rather dramatic dietary changes that have occurred over the past 10,000 or so years. They note that modern man tends to eat fewer fruits, meats, seafood and vegetables than his paleolithic predecessors. In addition, 21st century eating frequently includes denatured and hydrogenated fats, lower fiber intake and more sodium. What’s more, recent interventional trials using paleolithic style diets have revealed that they generally promote higher potassium levels, lower sodium concentrations and improvements in various markers of cardiovascular health. This has lead some scientists to suggest a return to a more “stone age” way of dining. (8,9,10,11,12,13)

The most fundamental way to improve the sodium/potassium ratio is to eat fewer packaged products and a diet that consists primarily of fresh, whole foods. However, this doesn’t necessarily mean that you have to follow a low fat, mostly vegetarian, DASH style diet. There are many foods that are high in fat that also provide substantial quantities of potassium and minimal amounts of sodium. Avocados, chicken, fish, meat and a variety of nuts and seeds all fall into this category. (14,15)

The use of potassium supplements is rarely called upon because said pills and tablets often cause digestive irritation and upset. Fortunately, there are some low sodium, salt substitutes that are easily found in health food stores and markets. Such food additives are typically rich in potassium and have been shown in numerous studies to lessen arterial stiffness and lower blood pressure. (16,17,18,19,20,21)

The cardiovascular system gets the lion’s share of the attention in relation to salty foods. However, other organs and systems in the body such as the kidneys and the skeletal system can similarly be affected by an imbalanced sodium/potassium ratio. If you combine the prevalence of heart and kidney disease with osteoporosis, it would seem that nearly everyone should become conscious of how much sodium and potassium their typical menu provides. (22,23,24,25,26,27)

One of the hottest debates about salt is whether sodium is to blame for its bad rap. Some alternative and integrative practitioners believe that highly processed table salt is what is truly at fault. On the other hand, they claim that natural, minimally processed sea salt is actually health promoting. Sea salt is, indeed, a more natural product which contains trace minerals that are absent from conventional table salt (sodium chloride). This is why some of the biggest names in modern medicine, such as Dr. Andrew Weil and Dr. Mehmet Oz, recommend its use. But there’s very little debate about one thing: sea salt contains about as much sodium as conventional salt. I should also point out that I’ve only seen one study that has compared the effects of sea salt versus sodium chloride. That animal trial actually found that sea salt was more likely to produce hypertension in a group of lab rats. (28,29,30,31)

In my opinion, the healthiest ways to reduce sodium intake is to: a) eat more whole foods and reduce intake of pre-packaged products; b) add more antioxidant-rich herbs and spices to recipes to your diet; c) consider a potassium-based salt substitute in consultation with your physician – this may not be appropriate for those on certain medications or with compromised kidney function and; d) be consistent with your nutritional game plan. Please keep in mind that your chosen dietary strategy is serious medicine. It can work in your favor or against you. But one way or another, the food you eat is affecting your body and mind 24 hours a day, 7 days a week. A recent example is a study that found that eating high amounts of sodium can actually “contribute importantly to resistance to anti-hypertensive treatment”. I wonder how many people are finding incomplete or unsatisfactory response to their medications because they don’t know or apply this information. If they did know, it might even provide an opportunity to use less medication or none at all. The only way to find out the potential of a given therapy, whether conventional medication or natural diet, is to try it out. But balancing your sodium/potassium ratio offers at least one distinct benefit over medication: it’s highly unlikely to cause any adverse reactions or side effects. (32,33,34,35)