The work life of a writer tends to be quite solitary. I research on my own. I come up with topics in a committee of one. I even read the final drafts of my columns out loud to myself before I post them. That’s why I sometimes like to imagine that I work in a large advertising firm. Just like all the other worker bees, I’d have to march into the main conference room each morning and pitch my ideas to the “head honchos”. In that scenario, the one thing I can be sure of is this: If my material isn’t compelling enough, it won’t go into production. 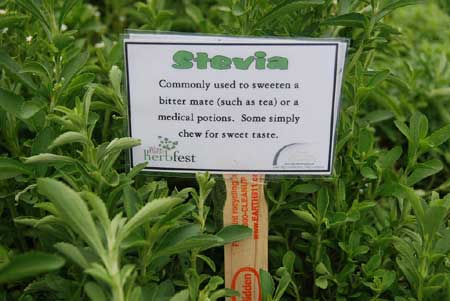 There’s quite a bit of good news to report about in the field of herbal medicine and nutrition today. The Internet has been especially kind to me on this day as I’ve looked for resources to write about. One news item that makes me particularly happy is a report from the University of Agriculture & Technology in Meerut, India. A group a researchers there has recently concluded a systemic review on the safety of stevia. Some of the highlights of that summary describe Stevia rebaudiana as a sweetening agent with “functional and sensory properties superior to those of many other high-potency sweeteners”. The review offers the opinion that specific populations such as children, diabetics and those “interested in decreasing caloric intake” may benefit the most from stevia. (1)

Purified stevia comes in the form of a white, crystalline powder that is derived from the leaf of a plant (pictured above). The next superstar in today’s column is characterized by its distinct yellow-orange pigmentation. Curcumin is a component of turmeric which, in turn, is a traditional component of curry powder. A recent laboratory experiment determined that this antioxidant-rich spice yields a potent anti-viral punch. In a very timely turn of events, curcumin has demonstrated a “direct effect on viral particle infectivity” in relation to the H1N1 and H6N1 flu viruses. What’s even more impressive is that these viruses did not appear to develop a resistance to curcumin like they did to a powerful, anti-viral medication known as amantadine. The next step is to see how this test tube study may be applied to living, breathing animals and humans. (2)

A specific form of Vitamin K (Vitamin K2 – menaquinones) has been identified in a “new” food/supplement source: spirulina, a blue-green microalgae that is commonly included in so called “superfood” supplements. Lately, Vitamin K2 has been garnering a great deal of scientific interest because of its established role in regulating calcium distribution. Preliminary studies indicate that even small quantities of K2 can assist the body in maintaining calcium in the bones and discouraging calcium deposits from forming in arteries. According to “analytical results from an independent contract laboratory”, Hawiiaan Spirulina Pacifica was been found to contain approximately 15 mcg of K2 per 3 gram serving. An additional 60 mcg of Vitamin K1 (phylloquinones) was also present. Therefore, the sum total of Vitamin K is 75 mcg per 3 gram serving or 94% of the Recommended Daily Intake for the nutrient. This makes spirulina one of the best sources of naturally occurring Vitamin K. (3)

Unbeknownst to me, there’s a new trend in tea brewing in Taiwan – steeping tea in cold water. This practice somehow caught the attention of a group of Italian scientists who decided to investigate “cold tea” compared to “hot tea” in terms of its chemical (antioxidant) composition. The researchers performed tests on “five loose tea samples consisting of unblended and blended teas”. The hot water teas were extracted using 90 °C water for 7 minutes. The cold water teas were simply submerged in room temperature water for 2 hours. Two surprising findings resulted from this experiment: 1) most of the teas, regardless of temperature, contained comparable amounts of antioxidants and; 2) the only tea that showed a significant difference was white tea, which had higher antioxidant values when steeped in cold water. A more specific test of antioxidant potential (the prevention of LDL cholesterol oxidation) did generally indicate superiority of the cold brewing process. If these results are confirmed in additional studies, this may turn out to be the way we should all be brewing tea! (4)

This final item inspires in me the same type of passion that a major boxing match might invoke in a sports fanatic. In one corner we have a favorite food of mine: chocolate. On the opposite side of the ring is one my top beverages of choice: red wine. This match up is to settle, once and for all, which is the mightiest source of health protecting antioxidants. 4 different varieties of chocolate (40% dark chocolate, 71% dark chocolate, milk chocolate and white chocolate) were tested to determine relative concentrations of two classes of phytochemicals known as flavonoids and polyphenols. 4 types of red wine (Cabernet Sauvignon, Merlot, Pinot-Noir and Tannat) were subjected to the exact same testing procedure. Here’s an overview of the findings:

The authors of the study didn’t have the heart to declare a winner in this battle of superfoods. Instead, they simply stated that “49 g(rams) of D71 dark chocolate has the same quantity of flavonoids as that of 196 ml of Tannat wine, which is the daily wine intake recommended to produce health benefits in an adult of 70 kg body weight”. I’ve never tried Tannat wine before. This may be a reason to give it a shot. (5)

When I used to work in the natural health industry, I’d encounter people who subscribed to every conceivable health care philosophy. There were those who believed that eating primarily raw food was the way to go. For them, I can now recommend cold water brewed tea. Others refused to even consider the use of conventional medications. A flu shot would be absolutely out of the question, but they might consider trying curcumin. Many of my low-carb buddies won’t touch a pinch of sugar or any artificial sweetener. Perhaps the new safety review of stevia will give them more confidence about this natural, zero-calorie “sweet leaf”. I’m also aware that some holistic enthusiasts prefer getting all of their nutrients from food or “food-based supplements”. Spirulina may be just the ticket for members of that tribe who are also concerned about cardiovascular disease and osteoporosis. Finally, there are those who cannot or will not drink any form of alcohol. Dark chocolate now appears to be a viable alternative under those circumstances. Foods and medicines derived from natural sources provide something specific and therapeutic for everyone. If we pay close enough attention and look for it hard enough, we’re bound to find what’s right for all of us.

A special note about the holidays: I’ll taking Thursday and Friday (the 24th and 25th) off in order to spend some quality time with my family. I’ll be back with a new column on Monday, December 28th. In the meantime, I wish you all a very healthy and joyful holiday. My best to you and yours!