When we go out with a group of friends, something kind of amusing often happens. During the course of the afternoon or evening, someone will pull me aside and bring up a health issue that they’ve read about or seen covered on the local news. “So what’s this I hear about coffee ‘curing’ diabetes?” “Is it okay to cook with extra virgin olive oil or should I just use it in salads?” “What’s the big deal about gluten?”. I love fielding these questions because it tests my knowledge and gives me a better idea of what kind of information is being spread over various media outlets. 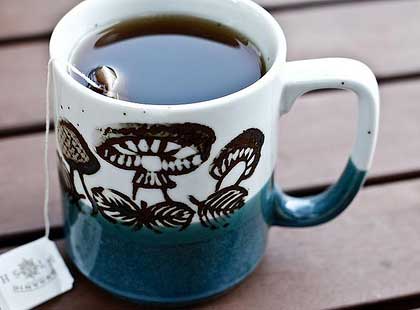 The topic of a recent conversation I had related to a pretty volatile issue among tea connoisseurs worldwide: Does adding milk to black tea negate its health benefits? I had never specifically studied this topic, but I knew that some heavy-hitters in the integrative medical community, such as Dr. Andrew Weil, have recommended against this combination. But I like to verify things for myself, so I did. Here’s what I discovered when looking into this “brewhaha”.

Before I get into the actual studies relating to this controversy, I’d first like to share some recent data that supports the use of black tea in general. A trial published in the December edition of the journal Toxicology found that 9 grams (about 3 cups worth) of black tea daily for 12 weeks can lower the levels of two cardiovascular risk factors: C-reactive protein and uric acid. A review from May 2009 “suggests that daily consumption of either green or black tea equaling 3 cups per day could prevent the onset of ischemic stroke”. The protection against strokes may, in part, be due to improved circulation via decreased arterial stiffness and an increase in nitric oxide production. (1,2,3,4)

Verdict: Pro-milk. Adding cow’s milk, rice milk or soy milk increased the antioxidant bioavailability of tea by 52%, 69% and 55% respectively. However, this was only a test tube (“in vitro”) experiment. (5)

Verdict: Pro-milk. Consumption of 400 mL of black tea resulted in a significant increase in “plasma antioxidant capacity” in a group of volunteers. This finding was “unaffected by adding milk”. (6)

Verdict: Anti-milk. The addition of 10% skimmed milk to 500 mL of “freshly brewed black tea” negated the circulation enhancing affects found when black tea was administered without dairy. The researchers concluded that a group of proteins in milk (caseins) appeared to bind to healthful phytochemicals in tea, thereby forming complexes that couldn’t be absorbed efficiently. (7)

Verdict: Mixed. A test tube study found that skimmed milk did result in a loss of an important component of black tea (theaflavins). However, this change did not appear to decrease the anti-cancer activity of the tea itself. The researchers commented that “the antimutagenic activity of green and black teas is not modulated by the presence of skimmed milk, even at high concentrations”. (8)

Verdict: Anti-milk. A specific protein in milk, beta-casein, was found to “mask” the antioxidant potential of two key phytochemicals in tea (epigallocatechin gallate or EGCG and gallic acid). (9)

Verdict: Pro-milk. Drinking black tea alone or with added milk did not affect the concentrations of tea-based antioxidants (kaempferol or quercetin) in a group of 18 volunteers. The authors of this study remarked that tea “bioavailability is not affected by addition of milk”. (10)

Verdict: Pro-milk. A single dose of black or green tea increases “plasma antioxidant activity”. This effect was not abolished by the addition of milk in this study. (12)

Verdict: Pro-milk. Tea was shown to increase the antioxidant content in the blood of 18 healthy volunteers and “milk did not affect any of the parameters measured”. (13)

Verdict: Pro-milk. Scientists measured the levels of catechins (a class of antioxidants found in tea) in 7 women and 5 men who drank controlled quantities of black tea, green tea and tea + milk blends. The researchers concluded that, “Catechins from green tea and black tea are rapidly absorbed and milk does not impair the bioavailability of tea catechins”. (14)

Verdict: Anti-milk. This study was a little different than most. It involved 10 participants and tested the effect of whole milk (not skimmed) on tea’s antioxidant activity. Green tea was found to be six times more potent than black tea, as measured by “human plasma antioxidant capacity” or TRAP. Mixing either tea with milk “totally inhibited” their antioxidant effect in vivo (in the body). The same effect was not found “in vitro”, which suggests that a reaction between components found in tea and milk likely occurs during the normal digestive process but not in test tubes. (15)

To summarize: Some studies indicate that milk does impede the benefits of black and green tea while other experiments say otherwise. But you may be wondering whether there’s any advantage of adding milk to tea. In fact, there is. Black tea is an abundant source of dietary oxalates, substances which can lead to kidney stones in certain people. Adding milk to black tea reduces the availability of the natural oxalates found in tea. It’s believed that the calcium content of milk binds with the soluble oxalates and, thereby, limits their absorption. (16,17,18)

Another benefit that cold milk can offer is to lower the temperature of tea. The chronic ingestion of very hot tea has been linked to an increased risk of esophageal and gastric cancer. Teas with added milk tend to have a “lower starting temperature” and make it less likely for the drinker to suffer from thermal damage. (19,20,21,22)

Here’s the bottom line as far as I’m concerned: Milk probably prevents black tea from living up to its full potential. There’s a plausible theory about why this happens (the “milk protein hypothesis”) and enough red flags to warrant caution. If I enjoyed adding milk to tea, I’d do one of two things: 1) use a low-protein milk-alternative, such as almond or coconut milk instead of cow’s milk or; 2) use organic cream which is virtually free of protein. On the other hand, if you have a history of kidney stones and you enjoy drinking black tea, then certainly enjoy a splash of milk in it. It just might save you for a lot of anguish down the line. That’s the whole scoop and nothing but the scoop on the tea/milk controversy. If new information emerges that adds a twist or two to this tale, I’ll be sure to update you all right here. Cheers!