Human nature dictates that we often want what we don’t have. Bald men wish for a full head of hair. Busy executives imagine what it would be like to have more time to spend with their families. Older folks lament aspects of their youth and children dream of the freedoms afforded to their elders. The grass always seems greener under circumstances that are likely to remain just a fantasy. 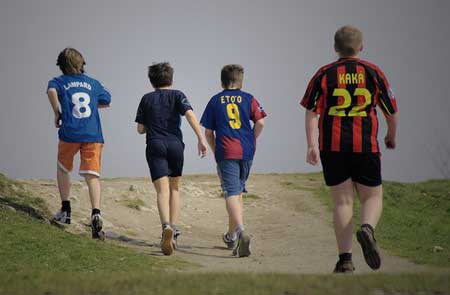 Today, I dreamt up an idea that could become a reality. This is something that I hope many of you will adopt and join me in doing. The concept is pretty simple, but implementing it will require some effort. After reading my proposal, I hope you’ll agree that the effort will be worthwhile.

I want to enact a plan which will be carried out by individuals. Let’s call it The Healthy Fellow 2010 Challenge. Age, gender, geography and race don’t matter in terms of my plan. It’s also unimportant whether you’re a so-called layperson or a medical professional. The ultimate goal of this challenge will be to affect weight change in others by improving your own body mass index and overall wellness.

Most people are aware that obesity has become a significant burden on the health care system and society as a whole. But the consequences of weight extend beyond an ever expanding waistline. The truth of the matter is that there is a weight-distribution problem occurring in the modern world. Many people are, in fact, overweight and gaining. However another burgeoning population – seniors – face the exact opposite problem: being underweight. Instead of simply focusing on the upper end of the weight scale, I’d like us all to observe the importance of both ends of the spectrum.

Several recent studies highlight the importance of maintaining a healthy weight and body composition during all stages of life. Here’s a brief overview of what the science says:

Based on the evidence presented, the solution isn’t simply to recommend generalized weight loss in younger and middle aged populations and weight gain in seniors. We need to be more specific than that. In adolescents and adults, it’s clear that dietary modification and more physical activity should be the foundation for establishing a healthier weight. Calories need to be reduced and calorie burning (via exercise) should be encouraged, but not at the expense of nutrient-dense, whole foods.

In the elderly, adding weight also needs to be done mindfully. Simply adding calorically rich foods isn’t necessarily a good option. The key is to provide nourishment that will support fat-free body mass and the skeletal system. This requires foods that are rich in healthy fats, nutrients and protein. A similar formula can assist the younger population and middle-aged adults in modifying harmful systemic inflammation and insulin resistance (“pre-diabetes”).

My challenge to you is this: Consider making it a personal goal to improve your own weight situation. By doing so, you’ll open the door to inspiring others to follow suit. Come up with recipes and techniques that make this goal a reality in your own life. Then, share that personal knowledge with the people around you that need help. You may not realize it, but you have the unique ability to touch the lives of select individuals that no one else does. Just look around and you’re likely to spot opportunities. If you can’t find any, make it a point to seek them out – in your neighborhood, online, at school or work.

I want to relay a recent experience of mine. As you may already know, I recently lost a considerable amount of weight (85 lbs.) and have managed to keep it off. A few months ago, my wife decided to begin her own, self-styled weight loss/wellness program. She’s doing a wonderful job at applying her dedication and willpower to achieve better health. This has resulted in a significant weight loss of 17 lbs and a vastly improved quality of life – all of this because of her decision to change her life for the better. But part of the inspiration behind Mrs. Healthy Fellow’s shift was seeing my success. The example I set provided a reminder that “if I can do it, anyone can do it”. In addition, I’m sure that Mrs. Fellow’s current and future success will prompt others to follow her lead.

The most valuable gifts we can give involve “digging deep” within ourselves. It’s relatively easy to buy someone a book, compact disc or a sweater. But making a genuine sacrifice for the benefit of yourself and someone you love is much more profound. A father or a mother losing weight in order to be healthy for their family sends a very powerful message. Devising healthy recipes and/or preparing nutritious food for an elderly family member nurtures more than just the body. These are true gifts from the heart. This is the season to give and a time when many of us resolve to make positive changes in our lives. Perhaps this will also gives us an opportunity to find new ways of expressing concern and love for those who mean the most.

New Year’s Note: I’ll be taking Thursday and Friday off to celebrate the new year with my family. There will be a new column on Monday – January 4, 2010! I sincerely hope that you all make the transition from 2009 into 2010 in the presence of much joy and love. Thank you so much for sharing your valuable attention and time with me this past year! Onwards and upwards in 2010!