It probably comes as no surprise that I’m generally not a big fan of pharmaceutical medications. However my actual position may be a bit more nuanced than I’ve let on. My overall view on prescription drugs falls somewhere between absolute acceptance and universal avoidance. I believe that certain medications, such as antibiotics, can be lifesavers. On the other hand, I’m deeply concerned about the chronic use of multiple medications. At a bare minimum, I believe that most prescribed drugs should be categorized by allopathic physicians much like nutritional supplements are by holistic practitioners. By that, I mean that medications should only be used if, and only if, there isn’t a more fundamental approach to addressing a health issue, such as diet or lifestyle modification. 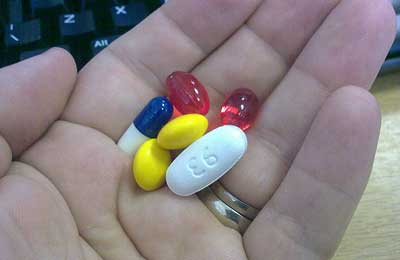 Occasionally an individual will try their darndest to live healthfully but they still can’t seem to get their bodies to fully cooperate. One example sometimes occurs in certain people struggling with blood sugar abnormalities. In most cases, there are some subtle tweaks that can remedy this problematic issue. But even the most holistically minded physicians will often reserve the option of using prescription medications in those who don’t fully respond to a 100% natural approach. The primary reasons are: a) some medications can be relatively safe, if used in conservative manner and; b) the harm caused by high blood sugar may outweigh the expected side effects associated with the medication in question.

In August 2009, I wrote a column about an old drug known as Metformin or Glucophage which is typically used to manage type-2 diabetes and polycystic ovary syndrome. In that blog, I primarily discussed emerging evidence that suggests a new role for this medication, namely as a cancer fighter. But things are coming full circle today. Several new studies are looking back in time and singling out Metformin as the current “go to” drug of choice for treating blood sugar imbalance and the cardiovascular harm that often accompanies it.

Polycystic ovary syndrome (PCOS) is one of the most common hormonal disorders in younger women. Abnormal and excessive hair growth, acne, infertility, insulin resistance, menstrual irregularities and obesity are common symptoms associated with this condition. Both alternative and conventional medicine generally attempt to treat PCOS, in part, by improving blood sugar levels and insulin sensitivity.

A recent German study evaluated the effects of Metformin in a group of 26 women with PCOS. Over the course of 2 years, the participants were asked to take the medication but were not encouraged to make any specific dietary or lifestyle changes. The researchers measured blood sugar and hormone levels at the start and completion of the trial. (1)

The women involved in this first study were probably most aware of the positive changes with regard to hair growth. But the developments taking place in the cardiovascular system may be even more important in terms of overall wellness. That point is made abundantly clear in another study presented in the December issue of the Journal of Clinical Endocrinology and Metabolism. In that research, 30 women with PCOS were given either an inactive placebo or Metformin for 12 weeks. After the initial 12 week period, the women took an 8 week break and then began the second “crossover” leg of the study in which they used the opposite medication. This study design is used to clarify the respective effects of both the placebo and Metformin.

These changes indicate a rather profound impact on cardiovascular risk factors in young women with PCOS. The primary advantage of this study is that it directly associated positive changes found in blood tests and an improvement in measures of arterial and endothelial function. This is important because PCOS and type-2 diabetes have been implicated in a greater risk of heart disease. It seems that Metformin may assist to mitigate that increased health threat in people with both of these conditions. (2)

The November 2009 issue of Diabetes Care adds an important side note to the Metformin/heart disease topic. It appears that adding folic acid to the standard Metformin treatment protocol can lead to even better outcomes. It may be that the folic acid counteracts a “slight but significant” elevation in homocysteine caused by Metformin. Homocysteine is a protein that may be associated with a greater incidence of heart disease and stroke. Previous investigations have also linked higher homocysteine levels with Metformin use. However this potential concern appears to be easily addressed by simply supplementing with adequate amounts of vitamins B6, B12 and folic acid. (3,4,5,6)

So far, I’ve focused on the benefits of Metformin in patients with PCOS, but I want to emphasize that this medication has even stronger evidence to support its use in those with type-2 diabetes (T2DM). An upcoming piece in the January issue of Current Vascular Pharmacology comments that “to reduce the elevated cardiovascular risk associated with T2DM, tight glycemic control and aggressive therapy against all known cardiovascular risk factors are strictly required”. The Italian scientists who authored this review single out Metformin as the superior drug of choice in this regard. Another summary published in December’s British Medical Journal also suggests that Metformin is a safer option as compared to “first or second generation sulphonylureas” (newer, commonly prescribed anti-diabetic medications). (7,8)

The issue of safety is of particular importance when considering any medication for children. The January 2010 edition of the Journal of Pediatrics features a study on a group of 38 girls with a condition known as precocious pubarche (PP) or premature puberty. Four years worth of Metformin use resulted in improvements relating to blood sugar, body fat, cardiovascular health, hormonal regulation and skeletal integrity in this study group which began the trial at an average age of 8. An Australian review recently identified four “randomized controlled trials” on Metformin in children with insulin resistance. Each of the studies tested Metformin with or without the addition of dietary and lifestyle interventions. The net result of the trials indicate that Metformin significantly lowers fasting insulin, discourages insulin resistance and tends to reduce body weight in children with “pre-diabetes”. The weight loss observation may be due, in part, to a recently discovered impact of Metformin on a hunger hormone known as ghrelin. (9,10,11)

There’s a lot of good news to report about Metformin. But it’s also important to remember that diet, exercise and stress reduction should always be the first-line approach to modifying most blood sugar related health issues. Even positive medical evaluations of Metformin often point out that interventions such as the Diabetes Prevention Program (DPP) can be even more effective for most people at risk for diabetes. DPP involves “intensive training in diet, physical activity and behavior modification”. In short, the program encourages the consumption of greater amounts of nutrient dense food that is lower in calories and about 3 hours per week of exercise. It’s quite possible that a combination of both Metformin and interventions such as DPP may have an even greater, additive effect. This is currently being investigated in a group of high risk adolescents. In addition, some scientists are attempting to combine herbal extracts with Metformin to see whether those combinations will yield even more potent and safer end results. (12,13,14,15)

The body does not inherently require medications. There is no known deficiency to any over-the-counter or prescribed drug. In fact, the body often tries to tell us that various drugs aren’t well suited for it by displaying adverse reactions. Metformin is no exception to this rule. Some people do suffer from the side effects associated with it. However, that doesn’t mean you should rule out its use altogether. I personally think it’s foolhardy to deny oneself any potentially healing substance, if it turns out to be the best available option. Please remember that there can be consequences to both taking and avoiding medications. We have to balance the upside and downside of every therapeutic option, whether natural or synthetic. It’s important to research these matters ourselves and in consultation with thoughtful, medical professionals. (16)

I want to leave you with a compelling concept that Dr. Bernie Siegel shared with me many years ago. He once mentioned that the effect of any medicine, even chemotherapy, can be altered by how you view it. If you must or should take a medication, try to think of it as something healing and positive. By doing so, you may be surprised to find that the mind can bypass some of the ill-effects listed in the prescribing literature.