Manufacturers of herbal remedies rely on industry support, word of mouth and the occasional, positive scientific study to spur the sale of their products. This basic formula is a necessity because most alternative “medicines” will never corner their respective market or successfully make their way into the mainstream medical system. What ends up happening is that much less money is spent actively promoting said products. Likewise the overall sales figures are also much more modest than what is found in the pharmaceutical sector. This dynamic tends to promote a climate where trends dictate what supplements become darlings and which ones are put out to pasture. 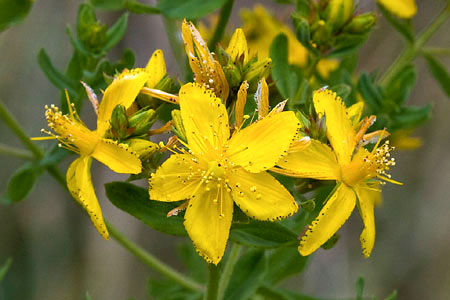 A case in point is St. John’s Wort. In the 1990’s Hypericum perforatum was frequently in the news and tallied worldwide sales upwards of $570 million in 1998 alone. This bestselling herbal extract was crowned the king of natural antidepressants – a gentler and safer option for those who needed a mood booster but couldn’t tolerate conventional medications. But over the past several years, various conflicting studies and quality control issues have put a dent in H. perforatum market. It still sells reasonably well, but it’s only a shadow of its old self. (1)

I have mixed feelings about this turn of events. I’d love nothing more than to be able to wholeheartedly recommend St. John’s wort (SJW) for a wide variety of ills, as so many other people do. But unlike countless other herbs, SJW actually has a considerable amount of scientific study on which to base an opinion. Some of the published trials support its use, while others indicate a lack of utility for select conditions. That’s why I’d like to update this topic today.

An Iranian study published in the January issue of the Journal of Alternative and Complementary Medicine describes the potential of SJW when applied topically. “144 women with surgical childbirth” were asked to apply a SJW based ointment or a placebo ointment to the incision site 3 times daily for a total of 16 days. An initial assessment of the cesarean wounds was conducted after 10 days of treatment. A follow up evaluation was held on the 40th day postcesarean. The SJW ointment resulted in improved wound healing at day 10 and reduced scar formation after 40 days as compared to the placebo and a group of women who didn’t receive any treatment. The women receiving SJW also reported a lesser degree of itching and pain. The authors of the study concluded that “Topical application of H. perforatum is safe and can facilitate cesarian wound healing and minimize formation of scare and its pain and pruritus”. A recent Turkish experiment using an olive oil extract of SJW discovered “remarkable wound healing and anti-inflammatory activities supporting the folkloric assertion of the plant in Turkish folk medicine”. It appears that certain phytochemicals found in the aerial portion of the SJW flowers, namely flavonoids and hypericins, are responsible for these historic and modern benefits. (2,3)

Antidepressants are often used as part of a conventional IBS (irritable bowel syndrome) treatment protocol. Some research suggests that low-dose antidepressants may improve IBS-related quality of life issues and normalize gastrointestinal motility, thereby improving constipation and diarrhea. Scientists at the Mayo Clinic recently decided to test whether St. John’s wort would yield similar results. A 12 week, double-blind, placebo-controlled study was initiated involving 70 IBS patients. Half of the volunteers received 900 mg (450 mg twice daily) of a standardized SJW extract and the remainder was given a similar looking placebo. The good news is that many of the participants reported improvements in “overall bowel symptom score (BSS)” by the end of the trial. However, those receiving the placebo actually found better results than the SJW users! All told, 51% of the SJW participants and 54% of the placebo group perceived a decline in IBS symptoms. This tells us two things: 1) SJW probably isn’t an effective remedy for IBS (at least based on the dosage, product used and duration of treatment) and; 2) the power of the mind or the “placebo effect” is indeed a very powerful tool. (4,5,6)

An inability to maintain eye contact and verbally express oneself are two primary characteristics found in those with autism spectrum disorders (ASD). An Italian study appearing in the November 2009 issue of Phytotherapy Research examined the potential of SJW in 3 patients with this developmental disorder. The male participants were selected because they were unresponsive or unable to tolerate conventional psychopharmacologic treatments such as clonidine, desipramine and methylphenidate. Parents, physicians and teachers were asked to look out for any detectable changes in the young men. The results from these case reports were quite modest, but still noteworthy. Parents and mentors reported slight improvements in “inappropriate speech factors”, irritability and sterotypy (repetitive movements or postures). The supervising physicians did not detect significant benefits based on a variety of rating scales. The one exception was a finding that SJW was somewhat “effective in the short-term treatment of irritability”. These limited case studies can hardly be considered a triumph. Still, they may provide the basis for further inquiries in ASD patients who require an alternative approach. (7)

St. John’s wort is typically considered a generalized antidepressant. However, new research hints at gender-specific benefits. A trial involving 14 “late-perimenopausal women” was conducted at the Royal Melbourne Institute of Technology. The goal of the study was to examine whether a combination of SJW and Vitex agnus-castus (chaste berry) could improve “PMS-like symptoms” as compared to a placebo. All of the participants filled out an Abrahams Menstrual Symptoms Questionnaire every 4 weeks over a 16 week trial period. The standardized questionnaire measured a variety of symptoms including anxiety, cravings, depression and hydration. The findings of the trial indicate that those receiving the SJW/vitex supplements demonstrated reductions in overall PMS scores and all of the PMS subgroups mentioned above. It’s difficult to know exactly how big a role SJW vs. Vitex played in these promising results. This is especially true because Vitex has a documented history in assisting with hormonal imbalance in females. However, a May 2009 trial in the journal Menopause notes that using SJW alone can successfully decrease hot flashes and ameliorate “menopause-specific quality of life”. This suggests the possibility that SJW monotherapy may have a role to play in hormonally influenced women’s health issues. (8,9,10)

SJW is a lot like every human being I’ve ever met. It isn’t capable of solving every problem it’s presented with and it’ll sometimes let you down. It’s neither all good or entirely bad. That’s perhaps the most important message I hope you’ll take from today’s update. Even the finest of natural medicines will not work 100% of the time. Beyond that, there are some instances where natural, organic remedies can have unintended consequences. One example is illustrated in an October 2009 review about established drug-herb interactions relating to SJW. The authors of the summary propose that “SJW has an encouraging safety profile” when taken by itself. But it can be hazardous to combine it with a number of medications such as certain anticancer drugs (irinotecan and imatinib), antidepressants (selective serotonin reuptake inhibitors), antiviral medications (indinavir and nevirapine), birth control pills, diabetic and immunosuppressive pharmaceuticals (cyclosporin).(11)

Another area of concern is spelled out in a first of its kind population study, also from October 2009. That investigation estimated that regular SJW users were 59% more likely to develop cataracts than those not using the herb. Previous laboratory experiments have also hinted at a proposed cataractogenic effect . More in-depth follow-up studies are called for in this matter. (12,13)

The most common warning you’re likely to see on supplement bottles has to do with the use of natural remedies during pregnancy or lactation. There simply isn’t enough evidence to give the go ahead for pregnant women to use most supplements when expecting. A recent analysis presented in The Journal of Reproductive Toxicology attempts to add to the current state of knowledge in this arena. A group of Canadian researchers documented the incidence of birth defects in a group of women who used either SJW, prescription antidepressants or no medications during their pregnancies. The total study pool involved 162 participants (54 in each group). It was determined that all three sets of women had a similar rate of “major malformations”. The percentages of birth defects were found to be comparable to the “3-5% risk expected in the general population”. Similar findings were noted with regard to “live birth” and premature delivery. The scientists involved concluded that, “Though further large scale studies are still needed, this first study on the effects of St. John’s Wort in human pregnancy does provide some evidence of fetal safety”. (14)

I think that being optimistic about treatment outcome is a wonderful trait. But there’s a fine balance that needs to be struck. I’ve observed that overestimating the benefits of natural remedies and underestimating their potential for harm is a rather prevalent attitude in the holistic community. This concerns me. Herbal remedies and nutritional supplements are a serious form of medicine. In general, I believe that they offer many advantages when compared to their allopathic counterparts. But they still need to be applied judiciously and respected in the same way as conventional medications. That’s why I believe that it’s vital we ask questions and practice due diligence prior to incorporating any natural or synthetic treatment into our daily routine. Combining a hopeful spirit and the best that research has to offer is one of the best prescriptions for wellness that I know.