The Internet is my medium of choice. It’s the primary tool I use to reach the very people I hope to affect in a positive way. However, this same platform is also being used by others in ways that can be hurtful. Sometimes the root of the damage stems from greed. I’m sure you’ve seen online advertisements for products that claim to effortlessly reverse Alzheimer’s disease, heart disease and even extend your lifespan. Fortunately, many people recognize that those sales pitches are hyperbolic at best and downright unbelievable at worst. But what happens when you receive an email from a family member or friend that contains health related information that claims a miraculous medical cure? The person who sent the information obviously cares about you and isn’t asking for any financial compensation. In short, the advice given in such emails is coming “from the heart”. What could possibly be wrong with that? 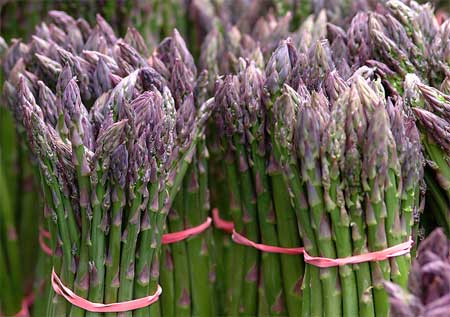 I recently received an email inquiring about a proposed asparagus cancer cure. This sort of claim isn’t uncommon on the ‘net. But there was an added element in this correspondence that intrigued me: the source of the information cited was from Snopes.com – a website that reviews and debunks fantastical rumors and urban myths. This was enough to set me off on my own personal search for an answer to the question – “Does eating asparagus cure cancer?”.

Asparagus is one of my favorite vegetables. A large serving of these green, purple or white stalks (about 12 stalks/one cup) only has about 30 calories and is an excellent source of valuable nutrients such as folic acid, potassium, Vitamins A, C and K. Beyond that, it also provides a fairly substantial amount of protein and fiber while contributing hardly any sugar. It’s pretty close to being an ideal food regardless of what kind of diet you’re following. (1)

Whenever you consider the relative worth of natural food, you need to take into account its phytochemical composition. Plant chemicals can contribute enormously to the overall impact of a fruit or vegetable on the human body. In many cases the benefits come from the potent antioxidant potential of said phytochemicals. In the case of asparagus, scientists have identified a number of antioxidant substances that *may* play a role in combating malignancies. The most popular plant chemical in Asparagus officinalis is probably glutathione, a free radical fighter that is thought to interfere with the establishment and promotion of cancer. However, there are many other anti-cancer components in this super food as well. (2,3,4)

Asparagus consumption has also been linked to a few key processes that may discourage the formation of cancer via: a) an antimutagenic effect – preventing genetic mutations which can directly precede the earliest stages of cancer development; b) the promotion of “cellular phase II detoxifying enzymes” which “facilitate the removal of drugs and xenobiotic compounds” that are carcinogenic and supporting overall liver function; c) synergistically enhancing the antioxidant activity of other plant foods; d) the inhibition of chronic inflammation (cycooxygenase-2 suppression) which is thought to play a role in tumor development and; e) the promotion of healthier digestion and immune function thanks to its natural, prebiotic content. (21,22,23,24,25,26,27,28,29)

The color of asparagus may also play a role in its therapeutic potential. I would suggest sticking with the green or purple stalked varieties. A class of phytochemicals known as anthocyanins are what gives “purple passion asparagus” its distinctive color. These substances, similar to those found in berries and red wine, possess a potent oxygen radical absorbance capacity (ORAC) and may play a role in protecting against many age related and chronic conditions ranging from arthritis to dementia. They’ve also been associated with considerable anti-cancer activity based on animal, human and test tube investigations. Green asparagus do not contain anthocyanins but they’re loaded with several varieties of carotenoids such as beta-carotene, lutein and zeaxanthin. Carotenoids have likewise been correlated with a reduced risk of cancer in population studies that have examined the dietary consumption of these plant pigments in relation to cancer incidence. (30,31,32,33,34,35,36)

In closing, I want to point out several relevant facts about this controversy. When examining the current state of asparagus research, it’s important that we only focus on the exact type of asparagus that is typically consumed as a vegetable (Asparagus officinalis). There are additional members of the genus Asparagus that do possess other medicinal properties but are generally not consumed as a vegetable worldwide.

The Snopes.com piece I mentioned earlier does provided information about a possible asparagus cancer cure, but that was only part of what they reported. Toward the bottom of that column, it’s made clear that the origin of this claim, an article that’s reputed to have been published in a 1979 edition of the Cancer News Journal, is seriously in question. The author of the Snopes review concludes that “miraculous tales of serious bouts of cancer overcome by asparagus therapy cannot be confirmed and thus should not be regarded as anything other than lore”.

Ralph Moss Ph.D., a leading figure in the integrative cancer treatment movement, recently noted that he’s been hearing about asparagus cancer cures for over 35 years. He goes on to say that this widely circulated story “has all the hallmarks of an urban myth” and that it’s “unsupported by scientific studies”. Even after putting together all of the evidence for today’s column, I have to mostly agree with Dr. Moss. The word “cure” is a very definitive word. I don’t think it can be responsibly used in this case. I have absolutely no problem recommending asparagus to anyone and everyone who will read my words. By all means, eat it regularly. It’s a wonderfully nutritious and therapeutic vegetable. But claiming that it alone can heal malignancies is stretching the truth and could result in some people missing out on other treatments that are more likely to extend their lives and provide a real cure. (37,38)