Many years ago I attended a health conference where Dr. Julian Whitaker was giving the key note presentation. He mentioned that he was a strong believer in choosing at least one healthy habit and practicing it every day. In his case, Dr. Whitaker mentioned eating an apple once daily without fail. His reason for doing so was more than the obvious “An apple a day keeps the doctor away” philosophy. The broader point he was trying to make is that engaging in healthy lifestyle choices and/or eating nutritious food works best if we do it religiously. Sometimes having a specific goal in mind can assist us in doing just that. 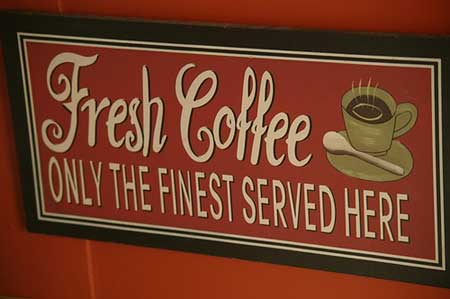 I have a healthy daily routine as well. Every morning I wake up and head toward the kitchen. I pour a cup of purified water into a glass teapot and heat it up. I reach into a nearby cabinet and pull out a bottle of instant, organic coffee. I add water to the coffee granules, mix and enjoy. This is the first thing I do everyday. You may be thinking that I do this because I’m looking to add a little pep to my step at the start of the day. But that’s just part of the reason for my morning ritual.

When I mention that I drink coffee, I’m often questioned about the wisdom of doing so. My reply tends to go something like this: “This may surprise you but I consider coffee to be a genuine health food. It’s 100% natural and most of the recent research suggests some pretty significant disease protecting properties. I don’t recommend it for everyone, mainly because of the caffeine content. But I can’t think of any food or supplement that’s right for every individual. As with everything else, you have to weigh the pros and the cons”.

One of the most the positive aspects of coffee consumption is its apparent effect on those at risk for diabetes or already dealing with the disease. Diabetes is one the leading causes of health care complications and spending. Figures from the 2007 Diabetes Fact Sheet indicate that over 23.6 million adults and children have diabetes in the United States alone. An additional 57 million are regarded as “pre-diabetic”. The cost of treating diagnosed cases of diabetes is in the neighborhood of $174,000,000,000 a year. Therefore, the potential impact that the humble coffee bean can have on diabetes incidence and progression needs to be carefully considered. (1)

Flow-Mediated Dilation of the Brachial Artery After Intake of Coffee

There are some downsides to drinking coffee, however many of the unwanted effects are short-lived. A recent example can be found in the February 3rd issue of the European Journal of Clinical Nutrition. Scientists from the University of Palermo in Italy determined that caffeinated coffee reduced “flow-mediated dilation” of the brachial artery and caused an increase in blood pressure in a group of 20 healthy, non-obese men and women. These unfavorable effects were not present when the same test subjects consumed a decaffeinated Italian espresso. These transient changes – lasting about 1-2 hours – indicate a detrimental shift in endothelial function which can impact circulation. (5,6)

When examining a health issue, it’s important to look at the long-term significance of a finding as well as the short-term observations. The first issue to contend with here is the relative effects of caffeine itself. For instance, some research suggests that decaffeinated coffee may actually improve endothelial function and, thereby, promote healthier arteries. This might lead one to believe that caffeine must certainly be the bad guy. But not so fast. A German experiment from November 2008 discovered that caffeine appears to play a role in endothelial repair. Other investigations have reported that, if anything, regular coffee use tends to reduce risk markers relating to endothelial health (E-selectin) and systemic inflammation (C-reactive protein) which have both been associated with cardiovascular disease. The research that demonstrates positive effects for both caffeinated and decaffeinated coffee could possibly be explained by other health promoting phytochemicals such as kahweol which is found in all forms of coffee. (7,8,9,10)

Diabetes and heart disease are inextricably linked. It’s well established that diabetics are more likely to develop coronary artery disease than the population at large. Scientists believe that high blood sugar and insulin resistance likely promote arterial damage, blood clotting issues and chronic inflammation – all of which endanger the cardiovascular system. It’s possible that coffee, whether caffeinated or decaffeinated, plays a role in the natural management of both of these inter-connected diseases. But a serious evaluation of this topic is unlikely to occur if this traditional beverage is primarily viewed as a vice. I’m going to do my best to change that erroneous perception. I’ll take the next step in that process next week when I discuss several additional studies that highlight other facets of this controversial brew. (11)