It’s a good thing that some scientists never paid attention when their mothers warned them not to play with their food as children. If they had, they may never have discovered that topically applied onions, soybeans and turmeric powder can demonstrably improve the appearance and cellular health of skin. Several new presentations at this year’s meeting of the American Academy of Dermatology explain the exact “hows and whys” of this phenomenon. 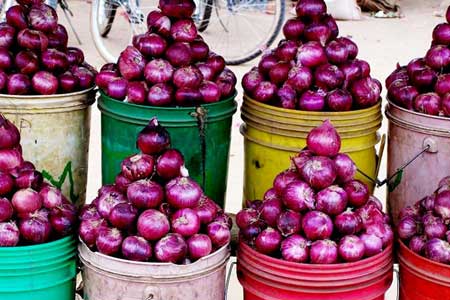 It turns out that applying an onion extract enriched cream can reduce the characteristic redness and texture typically associated with stretch marks. It won’t make them disappear or dissolve, but it can make them less prominent. According to researchers at Duke University, the skin magic found in onions is likely due to an anti-inflammatory effect brought about by naturally occurring flavonoids. Positive results were evident within 2 weeks of treatment and continued to progress throughout the course of the 12 week trial in question. It’s important to note that the study only involved female participants and examined the effects of the cream on stretch marks located exclusively on the outer thigh region. No side effects were reported. (1)

A “little known molecule” known as equol which is derived from soy may be the next big thing in the field of natural, anti-aging skin care. Researchers from BYU have discovered that this soybean derivative inhibits specific enzymes that break down collagen and elastin, two key proteins that are needed to support the flexibility and structure of the skin. Beyond that, equol has also been shown to stimulate the production of more collagen and elastin. In essence, it appears to slow the degradation of skin and, at the same time, builds a stronger, younger looking epidermis. (2)

“Curry cream” is probably one of the last things you’d expect to put on your face – unless of course you were going for a distinctive orange-yellowish glow. But that didn’t stop scientists from Procter and Gamble from finding a practical way to incorporate this potent antioxidant into their skin care line. A new purification process has allowed for the free radical fighting properties of turmeric to remain in place while removing the pungent odors and vivid pigments naturally found in this rhizome. A recent 8 week trial involving 89 women, aged 40 to 60, who applied a cream containing niacinamide (a form of Vitamin B3) and purified turmeric resulted in a 15% reduction in fine facial lines and wrinkles. A separate experiment which included 105 women demonstrated a 15% decline in hyperpigmentation of age spots. Much like the trials on the onion extract, it is believed that turmeric works as an anti-inflammatory and combats free radical damage resulting from environmental and lifestyle factors. (3)

Something tells me these studies will likely inspire a whole new generation of mischievous childhood prodigies who may not practice good kitchen etiquette but may one day discover a cure for acne, rosacea or even skin cancer. How will we know who these burgeoning geniuses are? Just look for culinary ingredients in unlikely places such as on cheeks, noses and foreheads.