Last Friday I was zigzagging between exhibitor booths at the Anaheim Convention Center. One of the most pleasant surprises I discovered was the omnipresence of stevia-based items and finished products sweetened with stevia. Even the coffee shops and concession stands throughout the convention center provided only honey, sugar and stevia as condiments. There was nary an artificial sugar substitute to be found at this gathering. 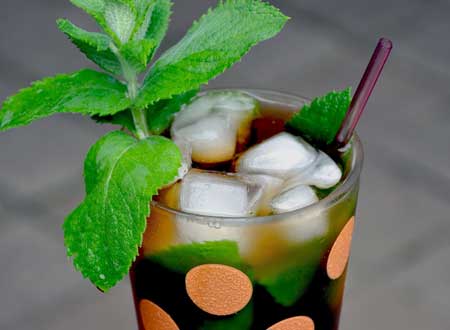 One of the first booths I stopped at was featuring a new product by the name of Sooo Sweet. A voice somewhere inside of me told me to halt my forward motion and pay this particular stand a visit. It could have been some intuitive, mystical drive or possibly just common everyday thirst. You see they were offering samples of ice cold, stevia “supplemented” tea at the booth. Regardless of why I made that pit stop, I’m glad that I did. The iced tea was actually very tasty.

The most frequent criticism I hear about stevia based sweeteners is that they have a bitter or otherwise unpleasant aftertaste. My wife recently described it in this manner, “When I try a product that has sucralose/Splenda in it, I first taste the sweetness and then a little bit of an aftertaste. But when I use stevia, I taste the off-taste first and then I detect the sweetness”. I can preach day and night about the health promoting properties of Stevia rebaudiana, but if the taste isn’t to your liking, you’ll probably opt for something else instead.

Natural products are inherently prone to slight variations from brand to brand and product to product. Even if the labels claim to be identical, the effects and/or the taste is not necessarily so. It is for this reason that I’ve found that you really must experiment with multiple stevia products in order to find the one that suits you best.

The Sooo Sweet product is a blend of two ingredients: stevia extract and a soluble dietary fiber known as Fibersol 2. Here’s a brief overview of the most recent scientific research on both of these natural substances.

Over the past several months, there have been three major studies involving stevia extracts published in the scientific literature. A current paper in the International Journal of Obesity examined the effects of the non-caloric sweetener, stevioside, in an animal model. Two groups of mice were fed either a placebo or steviosides over the course of 12 weeks. The mice receiving the stevia extract demonstrated lowered glucose and insulin. Other key changes in the stevia-fed mice included: an increase in antioxidant activity and adiponectin, and improved blood sugar transport and insulin signaling. Perhaps the most notable difference between the two groups of mice was a reduction in aortic plaque and greater stabilization of artherosclerotic plaque in those receiving stevia. Together, these findings suggest potent protective activity with regard to cardiovascular disease, diabetes and metabolic syndrome. The remaining studies include a review of the relative efficacy and safety of stevia which determined that “Although stevia can be helpful to anyone, there are certain groups who are more likely to benefit from its remarkable sweetening potential”. The authors conclude by saying that, “These include diabetic patients, those interested in decreasing caloric intake, and children”. Another investigation from December 2009 tested the impact of a variety of natural sweeteners in an animal population. In that inquiry, stevia was found to be safer than fructose containing sweeteners such as agave, fructose and high fructose corn syrup. (1,2,3)

The secondary ingredient in Sooo Sweet may appear to be somewhat controversial. The technical name for it is “resistant maltodextrin”. In its unmodified form, maltodextrin has an extremely high glycemic index. However, resistant maltodextrin actually helps to moderate blood sugar and insulin response. In addition, some research indicates that it may help enhance the absorption of dietary minerals such as calcium, iron, magnesium and zinc and possibly even decrease diet-induced elevations in cholesterol and triglycerides. (4,5,6)

During my time at the Natural Products Expo West convention, I kept thinking about how cool it would be to have my readers at the show with me. That’s when it hit me: I may not be able to bring you all to the show, but I can bring a little piece of the show to you!

In order to do so, I’ve arranged for a free giveaway of the Sooo Sweet product. The deal is that I’ll receive and then distribute 10 boxes of Sooo Sweet which contains 60 packets of this proprietary stevia extract. The first 10 readers to send me an e-mail requesting a box will act as our test audience. Each and everyone who wants to try out the product for free will need to agree to provide informal feedback via email or a post on this site about their experience using the product. We’re counting on you to provide the real scoop for the rest of us. Offer your unvarnished opinions and even tips you learn during the course of experimenting with this novel sweetener.

This is a sign of things to come on HealthyFellow.com. I want to find ways to make the experience here more interactive. We have a wealth of good will and proactive individuals in our community. I want to tap into that wonderful energy so that we might all benefit from each others’ trials and errors. I hope you’ll participate in this and upcoming opportunities. As a final note, please be aware that I will only offer giveaways and promotions on products that I’m willing to try myself.