Laughter As a Healing Force

Welcome to my first blog entry. Let’s get this show on the road!

There was a recent review in the journal Evidence Based Complementary and Alternative Medicine (try saying that ten times fast!) that provides a scientific overview of the benefits of laughing regularly. Laughter and science? You betcha.

So, what are some of the documented medical benefits of “laughter therapy”? 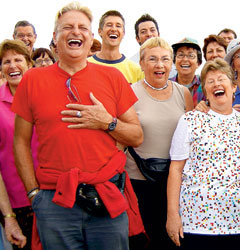 1. Muscle Relaxation – After a period of laughter, muscle relaxation has been reported to last up to 45 minutes. You laugh. Your muscles relax. It’s that simple.

2. Anxiety Relief – College students who listened to a humorous tape during a stressful experiment decreased their self-reported anxiety in a controlled study. And what’s more, those with the greatest sense of humor enjoyed the greatest anxiety-relieving effect.

3. Strengthening the Immune System – A group of subjects was given a funny movie to watch. After watching the comedic film, their blood was analyzed for certain stress-related markers. The researchers who conducted the study found that there was a significant drop in cortisol levels. Cortisol is a stress hormone that can cause your immune system to become compromised.

4. Funny Exercise – Laughter basically provokes the same physiological changes in our bodies that exercise does. You see, while we laugh, our heart rate rises, our breathing quickens and our oxygen intake increases. That’s a very similar reaction to what happens when we exercise.

The authors of this review conclude that the current research on laughter is encouraging and that more research should be conducted – to better understand how and under what circumstances laughter can be most beneficial. Until then, my advice is to have a good laugh whenever possible. And, beyond that, help someone else find that momentary burst of muscle-relaxing, anxiety-relieving, immune-system building “exercise” that’ll make you both feel better.

Thanks so much for dropping by. I hope you enjoyed my opening blog. And, I really hope you’ll visit again. I’m posting new content everyday. Don’t miss out!


5 Comments & Updates to “Laughter As a Healing Force”