Before stepping foot in the Anaheim Convention Center to attend Natural Products Expo West, I formulated an introduction for all the exhibitors and representatives I planned to meet. First, I would introduce myself. Then I’d explain what my site is all about. Finally, I’d reveal my basic objective – to learn about the most cutting edge developments in the natural health industry so that I might pass them along to my readers and subscribers. I knew this was the correct approach for me because it fits right in with my overall strategy for this site. Simply put, I want to share current, “under the radar” medical information with you and those whose lives you touch. Every Monday you can count on me presenting at least five natural health items that specifically fit into this category. According to my calender, today is Monday, so here goes! 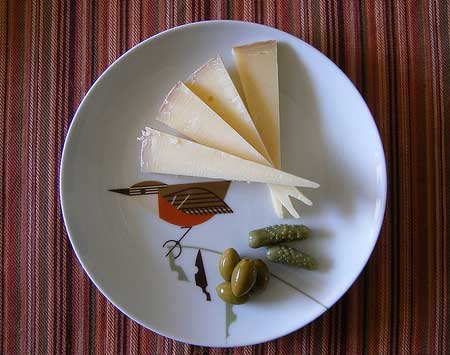 A fascinating trial was recently published in the American Journal of Clinical Nutrition. A group of French researchers set out to determine whether high heat cooking would have an effect on various health markers associated with cardiovascular disease and diabetes. “A randomized, crossover, diet-controlled intervention trial” involving 62 men and women was carried forth over the course of several months. During one segment of the study, the healthy volunteers were provided with a diet that focused on mildly steamed foods (low heat processed). At a separate time, a diet centered on foods cooked at high temperatures was administered for a month. The primary difference between the two diets were the respective levels of potentially harmful Maillard reaction products (MRPs), substances that are formed during high heat cooking conditions that have been associated with a variety of ills including diabetes, heart disease, neurodegenerative conditions and renal damage.

The changes noted are indicative of a higher risk of developing blood sugar disorders and heart complications. The conclusion of the study states that, “Replacing high-heat-treatment techniques by mild cooking techniques may help to positively modulate biomarkers associated with an increased risk of diabetes mellitus and cardiovascular disease”. Based on this finding, it seems what you eat is only part of the story. How you prepare your food should also be a serious consideration for anyone truly interested in preserving good health. (1)

I’ve long since discovered that it’s important not to be overly idealistic when promoting natural health concepts. Matters pertaining to enjoyment of life and practicality must be factored into the final equation. A recent study conducted at UCLA and partially funded by the National Institutes of Health may help those who will occasionally continue to cook with higher heat. One of the popular forms of high-temp cooking is barbecuing. If you enjoy preparing meat in this way, consider adding herb and spice blends to the meat prior to cooking it. In this current experiment, an oregano-rich spice blend lowered the levels of malondialdehyde, another harmful byproduct of high heat processing, in cooked hamburgers by 71%. There was also a 49% reduction in urinary malondialdehyde in a group of volunteers that ate the spice-enhanced burgers versus un-spiced burgers. Much like the first study, this finding can be applied to minimize exposure to chemicals that are correlated to cancer and heart disease incidence. (2)

I discovered this next abstract while finishing a cup of organic coffee. A new population study, based in Japan, was recently published in the Journal of Nutrition. Researchers from Tohoku University Graduate School of Medicine examined the effects of coffee consumption in a group of 37,742 middle-aged men and women. Over the course of about 10 years, 2,454 of the initial group died. Of those, 426 of the mortalities were caused by cardiovascular disease (CVD) and 724 were assigned to cancer.

The female participants also demonstrated a reduced risk of colorectal cancer according to the authors of the study. They ultimately concluded that, “Our results suggest that coffee may have favorable effects on mortality due to all causes and to CVD, especially CVD, in women”. (3)

The Alexander Technique Manages Back Pain Effectively and Inexpensively

Dairy products and meat are often implicated as risk factors in a variety of common cancers. There’s no doubt that the way some livestock are raised and how these foods are processed can be inhumane, harmful to the environment and detrimental to human health. But to offer a blanket statement that such foods are flat out dangerous is simply not in line with all the research that’s being presented in the scientific literature. For instance, a form of Vitamin K known as menaquinone or Vitamin K2, has been linked to a statistically lower risk of multiple malignancies. The richest dietary sources of menaquinones are cultured and fermented dairy products such as cheese and meat. New evidence from the German Cancer Research Center in Heidelberg, Germany reveals the latest proof of a Vitamin K2/cancer connection. A 10 year follow up study, involving 24,340 men and women with ages ranging from 35-64 found a 14% reduction in overall cancer incidence and a 28% decline in cancer mortality in those with the highest dietary intake of Vitamin K2. Both men and women seemed to benefit equally with lung and prostate cancer showing the greatest response rate. It should be noted that plant-based sources of Vitamin K (phylloquinone) did not appear to afford the same preventive value. (4,5)

The Alexander Technique (AT) is a gentle form of physical therapy that uses specific motions to correct posture. Much like Tai Chi and yoga, it generally strives to improve both mental and physical functioning. A new evaluation presented in the journal Family Practice suggests that this alternative modality may be very well suited for those living with chronic back pain. This conclusion isn’t based on a series of rigorous laboratory tests. Rather, it comes directly from the mouths of those who actually know best – patients. A recent comparison of 359 subjects with back pain enrolled in a 3 month program of The Alexander Technique vs. an “exercise prescription” indicates that those who participated in the AT program “felt they could manage back pain better”. A large proportion of the study volunteers also reported “many obstacles to exercising”. The same was not true of the AT enrollees. This is an important observation because the sustainability of a treatment protocol is paramount to its long term success. (7)

To review: Low-heat cooking is probably the best way to go whenever possible. Add anti-oxidant rich herbs and spices to meats that will be cooked using higher heat. The case for coffee’s health benefits just got stronger for women in particular. The next time someone tells you that dairy and meat are dangerous, let them know about the Vitamin K2 link to cancer protection. Finally, if you know someone who’s struggling with an aching back and is reluctant about using exercise or medication to address it – consider telling them about The Alexander Technique. It’s a fun conversation to have. It usually starts something like this – “Alexander who?”.