Several years ago, I was working in the casting department at a major film and television company. On one particular day I was asked to pull some scenes from the film Pay it Forward (starring Kevin Spacey, Helen Hunt and Haley Joel Osmont) that would highlight the considerable acting skills of Mr. Spacey. While reviewing the film, I remember thinking that screenwriters sometime like to write young characters into their films because they can say things that older actors can’t. Take this line for instance: “I guess it’s hard for people who are so used to things the way they are – even if they’re bad – to change. ‘Cause they kind of give up. And when they do, everybody kind of loses”. As spoken by the young Haley Joel Osment, the dialog was effective. But even a great performer such as Kevin Spacey might have a hard time pulling off those lines without sounding corny. 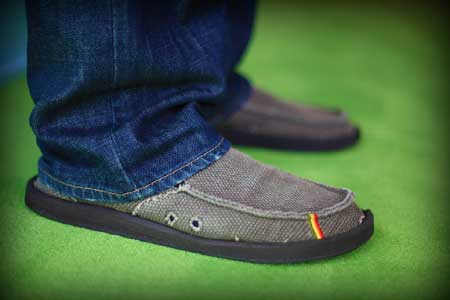 How does this all relate to natural health? Monday is “pay it forward day”. Today’s column contains five news items that have the potential to change lives for the better. By paying this information forward everybody kind of wins. See! It sounds corny when coming from a grown man!

It may seem counterintuitive but flat, flexible shoes appear to be better for your knees and joints than thick-soled athletic shoes. This revelation is based on a new study presented in the journal Arthritis Care & Research which compared the amount of stress placed on the knees of 31 men and women while wearing 4 different types of footwear: athletic shoes, clogs, flat walking shoes and flip-flops. The athletic shoes and clogs, both of which are commonly recommended to arthritic patients, actually exert the greatest load on knees – about 15% more than the other footwear tested. On the other hand, walking barefoot or wearing flat walking shoes and flip-flops were essentially equivalent in terms of having the mildest impact on knees. This is in line with my own anecdotal observation. My absolute favorite shoe of all time is a flat, flexible line of footwear by Sanuk, which combines a “shoe upper” with a “sandal bottom”. A pair of their shoes is pictured above. (1)

Pharmaceutical representatives everywhere would love to be able to tell you that they’ve created a drug that can lower the risk of heart disease related mortality by 49%. Such a medication does not exist. However the March 24th issue of the Journal of Nutrition offers guidance about a natural way to accomplish just that. Researchers from the Division of Human Nutrition at Wageningen University, The Netherlands examined the 10-year risk of fatal and nonfatal coronary heart disease in a population of 21,342 volunteers. Those who consumed the highest levels of DHA and EPA, omega-3 fatty acids found in fish, demonstrated a 49% reduced risk of fatal heart disease and a 62% decline in fatal myocardial infarctions (heart attacks). The authors summarized their observations thusly: “In conclusion, in populations with a low fish consumption, EPA+DHA and fish may lower fatal CHD and MI risk in a dose dependent manner”. (2)

A concern that’s frequently cited when discussing low-carbohydrate diets is that they *might* put excessive strain on the kidneys because of higher protein intake. A new trial in the Journal of the American Dietetic Association refutes this claim. In order to test this theory, 68 middle-aged men and women were placed on either a very low carb diet (4% carbs, 35% protein and 61% fat) or a high carb diet (46% carbs, 24% protein and 30% fat). Both menu plans provided approximately 1,500 calories per day (1,433 – 1,672 kcal/day).

A lack of Vitamin D affects people of all ages and spans the globe. This is evidenced by a new report in the journal Pediatrics. An analysis of Vitamin D levels in “459 healthy mother/infant pairs” was conducted at the Boston University School of Medicine between the years of 2005 to 2007. Blood tests establishing 25(OH)D concentrations were obtained within 72 hours of birth. The results revealed some rather startling statistics: 58% of infants and 35.8% of mothers had D levels that were classified as deficient (<20 ng/mL). Even more shocking was the fact that 38% of the newborns and 23.1% of the mothers fell into the “severely deficient” category – less than 15 ng/mL of D. Maternal use of a prenatal vitamin in the second and third trimesters was found to provide a protective effect against Vitamin D-deficiency in infants and mothers alike. However, the amount of D contained in most prenatal supplements may not be enough. As many as 30% of the mothers that used a prenatal tablet 5 times a week in their third trimester still showed signs of a lack of Vitamin D. (4)

Vitamin D is also featured in the most recent edition of the journal Obstetrics and Gynecology. That research discovered a strong correlation between sub-optimal D levels (lower than 30 ng/mL) and an increased risk of pelvic floor disorders such as urinary incontinence. Out of a total of 1,881 women, 23% was classified as having at least one pelvic floor disorder. The authors of the investigation noted “decreased risks of one or more pelvic floor disorders with increasing Vitamin D levels in all women aged 20 or older”. They went on to add that, “the likelihood of urinary incontinence was significantly reduced in women 50 and older with Vitamin D levels 30 ng/mL or higher”. In the 50 and older group, the reduced risk measured in at – 45%. (5)

To review: The next time you go shopping for shoes ask about their selection of flat, flexible footwear. Your knees just might thank you for it. Love your heart by learning to love fish and/or fish oil supplements. Healthy kidneys don’t seem to mind the extra protein that low carb diets often provide. Don’t assume that your Vitamin D levels are sufficient. There are many consequences of Vitamin D deficiency. But fortunately, it’s an easy and inexpensive problem to remedy – if you know it’s a problem. That’s the good news for this week. Please pass it on.