Throughout the ages there’s always been a clash between the norms of past and present generations. We see this is in the way people dress, the music they listen to and even the way they talk. And while there are always groups on both sides of the debate, there are also bystanders who watch on and think: “The more things change, the more they stay the same”. That argument can be logically made in the cultural arena. But I don’t think it holds water when it comes to dietary shifts that have largely taken place over the past few centuries. One of the more pronounced differences in the dietary composition of modern man vs. Stone Age dwellers is a shift in the ratio between sodium and potassium. 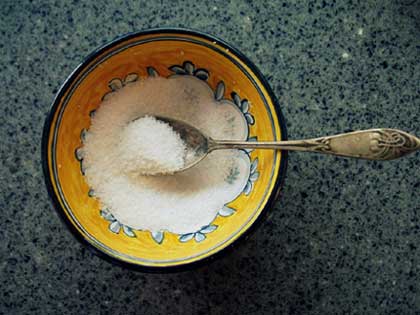 Major alterations in the way we eat matter because the human body simply doesn’t evolve nearly as quickly as technology and our whims would like. The fact of the matter is that many 21st century menu plans are top heavy in processed foods that are loaded with sodium chloride, otherwise known as common table salt. In the Paleolithic days the opposite was true. Most of the foods consumed back then were abundant sources of potassium and contained only moderate levels of sodium. This reversal of minerals has lead some researchers to comment that the “electrolyte mix of the modern diet is profoundly mismatched to its processing machinery”. (1)

Sadly, there is evidence from all over the world that people of all ages and backgrounds are frequently drowning in salt and thirsting for potassium without even knowing it.

The real world consequences of this aforementioned sodium/potassium imbalance is often the focus of scientific inquiries. Several recent studies address the dangers of both potassium deficiency and sodium excess, the first of which appears in the March 2010 edition of the American Journal of Clinical Nutrition. A group of researchers from New Zealand expounded upon the sodium/blood pressure link by examining the impact of salt on vascular wall function – an integral component of the circulatory system. Thirty-five hypertensive volunteers were asked to drink tomato juice beverages containing various amounts of sodium. As expected the tomato drinks spiked with sodium resulted in an increase in both diastolic and systolic blood pressure. But an additional observation was also verified: there was a significant elevation in pulse wave velocity which signifies a “BP (blood pressure) independent effect on vascular wall function” which “further supports the importance of dietary sodium restriction in the management of hypertension”. (7)

Two additional publications currently warn that excess sodium intake appears to: a) increase urinary calcium excretion possibly leading to bone loss and; b) decrease the amount of oxygen that reaches the kidneys (renal tissue oxygenation), which could lead to kidney damage in the long term. (8,9)

On the other end of the spectrum, we have potassium. The addition of potassium bicarbonate and potassium chloride was recently shown to improve the health of the cardiovascular system in a group of “42 individuals with untreated, mildly raised blood pressure”. Over the course of 12 weeks, the study participants were administered either a placebo, potassium bicarbonate or potassium chloride respectively. Both forms of potassium lead to positive changes in endothelial function and increased arterial compliance. In addition, potassium chloride generated minor changes in “24-hour and daytime systolic blood pressure” while potassium bicarbonate resulted in a reduction in urinary calcium loss – a measure of bone status. Another publication suggests that part of the therapeutic potential of potassium is mediated by its under-reported antioxidant activity. That review, by scientists from the University of Tokyo Graduate School of Medicine, postulates that dietary potassium protects the cardiovascular system and combats insulin resistance by countering oxidative stress caused by excessive salt intake. (10,11)

The most direct way to address a poor sodium-potassium ratio is to avoid processed foods and focus instead on eating a whole food diet. But I was recently introduced to a secondary resource which may provide some added support. About a month ago I discovered a new form of sea salt that actually serves as a good dietary source of potassium. How is this achieved? According to the makers, “All natural NutraSalt is harvested from the seas of the Mediterranean and crafted with minerals from the Dead Sea for added health benefits”.

Initially, I thought I was ahead of the curve when I learned of the product at this year’s Natural Products Expo West. But, apparently others are catching on as well. A few weeks ago NutraSalt was bestowed with a Best of Expo award for Honorable Distinction in the grocery/meals category.

A notable characteristic of NutraSalt is that it really does taste like a fine quality sea salt. It doesn’t have a metallic or other off taste like many other salt substitutes. However it’s what you can’t see or taste that really singles this product out. Replacing even a portion of everyone’s salt intake with this potassium-rich sea salt could go a long way to tipping the sodium-potassium ratio back in your favor.

Here’s the best part of all. I have samples and discount cards available for NutraSalt. I’m happy to announce that I’ll be sending out a trial size sample of “The Good Salt” to the first ten readers who e-mail me at (jp@healthyfellow.com) or leave a comment at the bottom of this column. All samples will be accompanied by a coupon code in case you like the product and want to order it as well.

As is always the case, I’ve received no financial compensation in conjunction with today’s promotion. I simply want to let you know about an up-and-coming product that I think may benefit your health and mine. If you’re one of the lucky ten or if you’ve otherwise tried NutraSalt, please let us have your impression – good, bad or indifferent. Your opinion always matters here and it can help guide others to the best new products out there.