Alternative and complementary practitioners differ from most conventional physicians in that they tend to take a more global view of wellness. To them, a symptom is just a sign that the body as a whole is out of balance. Therefore, simply prescribing a medication to address a specific symptom doesn’t quite cut it as far as alt-med providers are concerned. They believe that you must consider the totality of what’s going on with the patient. Is diet playing a direct or indirect role in the current circumstances? Are there certain nutritional supplements that may address an underlying deficiency? Could exercise improve the overall function and structure of the patient’s body? Do mind-body or stress management techniques have any role to play in the recovery process? No stone is left unturned and no treatment option is off the table. 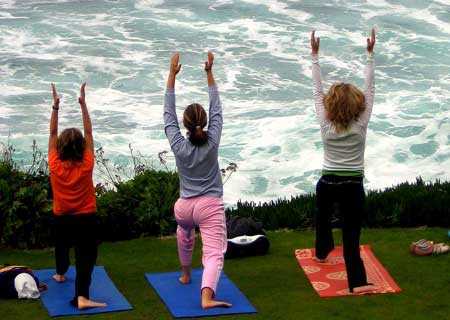 The first item of the day was passed along to me by a friend of the site. You may have seen some of his comments at the bottom of many of my of columns. He goes by the name of Iggy Dalrymple. Recently, Iggy sent me an e-mail about a paper appearing in the April 14th edition of the American Journal of Clinical Nutrition. The subject matter of the presentation is the influence of diet in relation to ovarian cancer risk based on “2 Australian population-based case-control studies conducted 10 years apart”. A total of 4,250 women took part in the evaluation. The results of the systematic review determined that:

I’ve addressed the controversial topic of soy in previous columns. At the crux of the debate is the relative effects that soy phytoestrogens have on both men and women. A current trial adds a valuable piece to this puzzle. It poses and answers a question about the impact of soy supplementation on breast and endometrial tissue in postmenopausal women. The study in question investigated a soy isoflavone supplement known as Phytosoya. Over the course of 3 years, a total of 395 women used this nutraceutical and took part in examinations which specifically looked for pre-cancerous changes via endometrial biopsy, mammography and transvaginal ultrasonography. No cancer cases were reported during the trial. There were also no adverse changes in breast tissue density or endometrial thickness. The incidence of adverse reactions was relatively minor: 8 participants reported “spotting” between menstrual periods (metrorrhagia) and 7 women noted breast symptoms such as “breast pain”, “breast tenderness” or hypertrophic breast – enlargement of breast tissue. All-in-all, the authors of the study concluded that “These results suggest that daily administration of 70 mg of a specific, standardized isoflavone extract for 3 years could be a safe treatment for both endometrium and breast”. (2)

A few days ago I stumbled upon an excellent example of an integrative medical experiment. Researchers from the Institute of Internal Medicine in Rome, Italy tested to see whether the concomitant use of probiotics along with non-steroidal anti-inflammatory drugs (NSAIDs) could protect against the gastrointestinal side effects which are commonly found in NSAID users. A double-blind, cross-over trial was employed to evaluate this hypothesis. Twenty healthy subjects were given a probiotic blend (VSL#3) or a placebo over a 3 week period. Toward the end of the trial – days 16 to 19 – the study volunteers were asked to take an NSAID known as indomethacin. A test called a “fecal calprotectin assay” (FCC) was used at the beginning of the study and throughout to establish whether there was any GI damage (enteropathy) due to the medication or probiotic use. According to the scientists involved, “Treatment with VSL#3 before and during indomethacin therapy significantly reduces FCCs in healthy subjects in respect to placebo, suggesting that this approach could be useful in decreasing indomethacin-induced intestinal inflammation“. Given the extremely high use of NSAIDs throughout the world, it may be worth asking your doctor about this integrative option. (3)

Exercise May Improve Cognitive Functioning in Older Men and Women

Some of you may be aware that I had an eating disorder, anorexia nervosa, during my adolescent years. I consider myself fortunate that I was treated for the condition without the use of medication. My treatment plan primarily consisted of intensive psychotherapy. However, a just published study suggests that yoga may also have a unique role to play in the non-pharmacological management of eating disorders. Fifty-four boys and girls recently took part in a trial conducted at Seattle Children’s Hospital. The 8 week intervention studied the difference in treatment outcome when the group was divided – with half receiving standard care and the remainder with standard care + yoga. It turns out that the children provided with yoga instruction demonstrated “greater decreases in eating disorder symptoms” as measured by reductions in an Eating Disorder Examination (EDE). In addition the yoga practice appeared to shift focus away from “food preoccupation”. It’s also important to note that the yoga practitioners maintained a stable weight and noted a decrease in anxiety and depression severity. (4)

Did you know that the brain has the ability to regenerate? More and more animal research and some human experiments are making this point abundantly clear. The latest example of this can be found in the May 2010 edition of the journal of Experimental Gerontology. Old-aged rats who engaged in treadmill exercise were shown to improve their “short-term and spatial memories by enhancing neurogenesis and suppressing apoptosis in the hippocampal dentate gyrus”. Apoptosis or cell death in this region of the brain occurs in older humans and leads to cognitive dysfunction. Neurogenesis refers to the growth of new nerve cells that commonly takes place in youth but “steadily declines from early adulthood”. The net result of these findings is that regularly walking on a treadmill may lead to a more functional and youthful brain. (5)

The next time you go to visit the doctor’s office with a medical issue, ask about all the things you could be doing to address your health complaint. If your doctor just pulls out a prescription pad and suggests that you take a medication to relieve your symptoms … remember this column. Research your given health concern and see whether there may be more to the issue than simply popping a pill. If you find an evidence-based alternative or complementary solution, ask your physician about incorporating such a strategy into your wellness plan. Some physicians are receptive to this approach while others are not. The latter position is a shame and a whole other issue. But it’s worth inquiring about at the very least.