Summer is quickly approaching and that means picnics aren’t far behind. The standard fare at such outdoor feasts often includes a plethora of unhealthy foods. Chief among them are hot dogs preserved with nitrites, potato chips and sugar-laden sodas. Today I’m going suggest a few healthier options that will hopefully satisfy your taste for the old favorites while at the same time supporting better health. 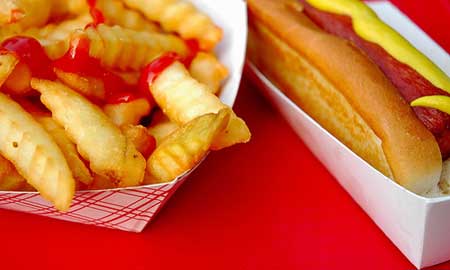 Why am I picking on hot dogs? I think I can illustrate my reasoning best by first presenting the ingredient list for a very popular hot dog brand and then comparing it to a much “cleaner” alternative that’s available in health food stores.

The difference in the quality of the ingredients is readily apparent. However, it is the final ingredient in the conventional hot dog that I want to focus on today: sodium nitrite. Nitrites have long been linked to a variety of cancers. The most recent example was presented in the November-December edition of the journal In Vivo. In that experiment, a group of 60 rats was fed normal diets or food enriched with sodium nitrite. The test animals given the nitrite exhibited a much a higher incidence of Barrett’s esophagus, “one of the complications of gastroesophageal reflux disease (GERD) and a premalignant condition”. These damaging cellular changes lead to a 33.3% greater risk of cancer (adenocarcinoma) in the sodium nitrite diet alone. I believe it’s best to avoid foods with added nitrates and nitrites. Choosing nitrate/nitrite-free bacon, cold cuts and hot dogs is one way of reducing exposure to these potentially harmful elements. (3,4,5)

The food you eat can either accelerate or slow down the rate by which you age. I touched upon this briefly when I recently covered the topic of alternate day fasting. A study just published in the FASEB Journal suggests that reducing consumption of dietary phosphates may be a practical strategy to slow the aging process. Conventional soda is one of the richest sources of added phosphorus in the form of phosphoric acid. But not all sodas are created equal. Once again, let’s compare a popular brand of soda to more natural options. (6)

The two natural sodas above do not include phosphoric acid nor any added sugar. The Zevia Cola yields a comparable energy boost due its natural caffeine content (derived from coffee beans). The Blue Sky Free Cola provides a caffeine-free alternative for those who are trying to limit caffeine intake. Both Blue Sky Free and Zevia are technically classified as “diet sodas”. However neither of them rely on artificial sweeteners of any kind.

If you want to support your long term health prospects and reduce your rate of aging, you should strongly consider adopting a diet and lifestyle that curbs excess inflammation and oxidative stress. On the other hand, if you want to age more quickly, eat plenty of foods that are loaded with acrylamide such as cereals, french fries and potato chips. A paper that appeared in the March 2009 issue of the American Journal of Clinical Nutrition revealed that eating 160 grams of potato chips a day for 4 weeks resulted in higher levels of inflammatory substances (C-reactive protein and interleukin-6) and “reactive oxygen radical production” or “free radicals” – which have the opposite effect as antioxidants. These troublesome changes were still evident, to a certain extent, 28 days after discontinuing the daily intake of potato chips. The authors of the study concluded that, “These novel findings seem to indicate that chronic ingestion of acrylamide-containing products induces a pro-inflammatory state, a risk factor for progression of atherosclerosis”. (11,12,13)

I know what some of you may be thinking: “But I like my potato chips! How can I possibly replace them?!”. I can’t promise you that replacing potato chips will be easy. But it becomes much more manageable when you keep in mind the reason for the change. You want to eat foods that give you the best possible chance at a long, healthy life. Potato chips work against that goal. The following alternatives do not:

Hot dog buns made with refined flour are at least as deleterious as the contents they hold. However there are a few low carb hot dog buns currently on the market. Some people on carb-restricted diets also use low carb tortillas instead of buns. Both of these options are preferable to conventional wiener buns but they’re not appropriate for people who are gluten-intolerant. For them, I suggest wrapping hot dogs in lettuce leaves and adding all the fixings. It works rather well as a holder and adds some texture to the mix. Don’t knock it until you’ve tried it!