I’m a big fan of some of the cooking shows that have recently been popularized on cable and satellite television. I find it interesting to see how notable chefs reinvent classic recipes in order to set themselves apart from the culinary pack. One way they do so is by “deconstructing” a meal. This essentially entails shuffling around the typical ingredients contained in a popular or classic dish and presenting them in a new and interesting way. That’s what I’ve tried to do with this recipe that would be a delicious, but healthful appetizer or hors d’oeuvres. 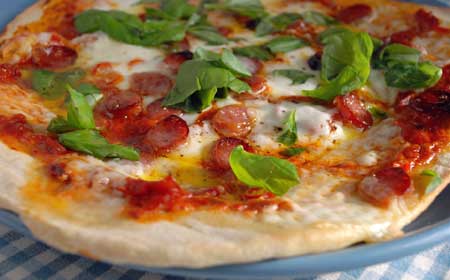 When I was thinking about how to formulate a healthier version of pepperoni pizza, two ideas came to mind. The first is that I’d need to ditch the crust. In my opinion, this is the worst element of this Italian delight. The next step was to increase the vegetable quotient. As we know, most pepperoni pizzas are essentially crust, tomato sauce, cheese and cured meat. This doesn’t offer much for the eater from a nutritional standpoint.

My solutions to the shortcomings of conventional pepperoni pizza are as follows: 1) replace the refined flour-based crust with another crispy element and 2) add nutrient-dense vegetables to the mix. I knew that this recipe could not work without a crunchy component. This has been accomplished by using large pepperoni slices as the crust. The vegetables I’ve selected are healthful, but they’re also mild enough to be masked by the stronger taste of the pepperoni and the assertive Italian cheeses.

Begin by chopping the bell pepper and black olives and slicing the mushrooms. Add a few tablespoons of olive oil to a non-stick pan over low-medium heat. Saute the diced pepper and sliced mushrooms until they’ve cooked down and tender.

Preheat the oven to 425 ° F. Line a baking pan/sheet with parchment paper and spread out the pepperoni slices in a single layer. Once the oven is fully heated, bake the pepperoni for 8 minutes. Remove the cripsy pepperoni slices and drain on unbleached paper towels. Combine the olives, sauteed vegetables and tomato sauce in a bowl. Place a heaping spoonful of the veggie-sauce mixture onto each slice of pepperoni and then top it with a small mound of the shredded Italian cheese. Place the baking sheet back into the oven for 3 minutes followed by 1 minute under the broiler. This final step will allow for the cheese to become bubbly and slightly golden. Make sure to keep a close eye on the crisps to prevent them from burning. Remove from oven and enjoy.

If you’d prefer a recipe that’s a bit lighter and easier to prepare, you might also consider a culinary creation by Giada De Laurentiis of the Food Network. She recommends simply combining high quality sour cream and fresh basil as a topping for her “salami crisps”. Since Giada uses a slightly different cured meat, she also bakes the slices using a lower and slower method (350 ° F for 15 minutes). (1)

The most recent studies published about mushrooms indicate that they possess certain “bioactive constituents” such as antifungal proteins, immunomodulatory proteins, lectins and polysaccharides which may yield medicinal properties re: cancer, cardiovascular disease, diabetes, irregular immune function and beyond. In fact, an examination published in this month’s edition of Nutrition and Cancer reports that premenopausal women who regularly consume mushrooms appear to be at a lower risk for breast cancer. (2,3,4)

Olives are nutritional superstars in their own right. Phytochemicals present in these savory fruits may confer meaningful anti-inflammatory activity without the damaging consequences typically associated with synthetic NSAIDs (non-steroidal anti-inflammatory drugs). It’s also important to remember that many of the health benefits of olive oil are probably translatable to olive fruit consumption as well. Current scientific research confirms that olives are an excellent source of potent antioxidants such as oleuropein which may be partially responsible for the heart healthy reputation of olive oil. (5,6,7)

Last but not least, I need to mention the under-acknowledged power of cooked tomatoes. Tomato sauce is perhaps the healthiest aspect of most pasta and pizza meals. But what’s most interesting about tomatoes is that their medicinal properties are predominantly located in the seeds and skin rather than the flesh. Fortunately, the seeds and skins of tomatoes are taken along for the ride in the sauce-making process. This is especially relevant because newly published works indicate that whole tomatoes offer significant protection against a variety of common malignancies. (8,9,10)

Although I referred to my Pepperoni Pizza Crisps as an appetizer or hors d’oeuvres that doesn’t mean they can’t play a different role in the context of a meal. Alternatively, you could very easily serve them along side a lightly dressed green salad and a glass of red wine. There’s also nothing wrong with just enjoying them as a snack. But what I’m really hoping is that you’ll make these deceptively healthy treats for the people in your life who are “veggie-phobic” or otherwise just plain old picky eaters. Hiding vegetables and/or enhancing/masking their flavor is an effective strategy when all else fails. Please give it a try and let me know how it works out.