Hello. I’m the Healthy Fellow and I’m addicted to coffee. Well, maybe “addicted” is overstating it a bit, but apart from water, it’s the beverage that I consume the most in my daily life. I genuinely enjoy the taste of most high quality coffees and I actually consider it to be a health promoting beverage on the whole. But just like any other favorite drink or food, it can become rather monotonous if I always drink it exactly the same way. Boring! 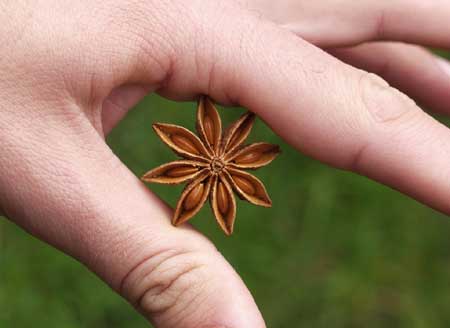 For starters, let me just say that I typically drink my coffee “black” – no cream, no flavored syrups, no sugar or sugar substitutes. Just coffee straight up, whether hot or iced. So that’s the basis upon which I’ll build. The first thing I wanted to accomplish with this experiment was to make the flavor of my daily brew a bit more complex. Secondly I wanted to alter the consistency somewhat. I discovered that both objectives could easily be achieved by simply adding almond milk and spices to the mix.

Before I get into the specifics of my new concoction I want to point out that there are two ways to make this recipe. You can use store bought ingredients like those I’m writing about today or you can make almond milk and espresso from scratch. That’s a matter of convenience and preference.

Pour the almond milk into a small pot and add the spices. Turn on the stove to a low-medium heat and allow the spices to infuse into the nut milk. Fish out the spices once the liquid begins to gently boil and emits a pleasant aroma. Carefully use a hand frother to foam the almond milk. Place the espresso powder and stevia in a large mug and pour the hot, frothy spiced-milk over it. Give a stir and enjoy.

I’m not including the nutritional analysis for this recipe because the coffee and spices contain only a negligible number of calories and nutrients. The brand of almond milk we use in our home is made by Blue Diamond Almonds and yields only 40 calories, 3.5 grams of fat and 1 gram of “net” carbs per 8 oz serving. In addition, it’s a good source of calcium, potassium and Vitamins D & E.

Earlier I mentioned that coffee isn’t very nutritious. But minerals and vitamins aren’t the only substances that establish the worth of a food. In the case of coffee, phytochemicals are the key to its health promoting attributes. Three new studies published in May 2010 further coffees good reputation. The first found that giving coffee to diabetic mice lowered blood sugar, improved insulin sensitivity and reduced the incidence of fatty liver. The second and third trials determined that: a) high coffee consumption was associated with lower levels of C-reactive protein, an inflammatory marker, in a group of 10.325 older men and women and; b) a coffee extract in conjunction with other plant extracts may reduce the risk of cancer by modulating a transcription factor known as NF-kappaB. (1,2,3)

The spices added to today’s latte aren’t just there for the sake of taste and/or variety. Star anise (Illicium verum) may possess anti-inflammatory, antioxidant and chemoprotective properties according to some preliminary laboratory experiments. Clove (Syzygium aromaticum) extracts have been identified as having potent antibacterial, antifungal and immune stimulating activity. Last, but not least, cinnamon (Cinnamomum cassia) is drawing a considerable amount of scientific attention because of its positive impact on carbohydrate metabolism. Recent animal and human studies suggest that this pungent spice may affect “multiple genes involved in insulin sensitivity“. It should also be noted that certain cinnamon extracts may also protect diabetics from blood sugar-related health threats such as high cholesterol and triglycerides, as well as kidney damage. (4,5,6,7,8,9,10,11,12)

In closing I want to encourage you to explore your creative side in the kitchen. As I was writing this column I decided to try out an even simpler version of today’s recipe. I heated up the almond milk and sprinkled in some organic pumpkin spice powder. I allowed the flavors to meld for about 5 minutes and then I frothed up the mixture using an electric hand whisker. I poured the almond milk infusion over a teaspoon of espresso powder and a packet of stevia and crossed my fingers. In my opinion, very tasty! Of course sometimes my experiments fall flat completely. Last week, I attempted to make caramel sauce using erythritol instead of sugar. It was an unmitigated disaster, but I had fun trying it out anyway. And that, I think, is the key to success. I have a good time in the kitchen and in my pursuit of wellness. By doing so, I come out ahead regardless of the results. I encourage you all to consider adopting a similar approach, if you haven’t already.