Whenever possible, I like to turn the spotlight on alternative remedies to potentially dangerous medications. A class of drugs known as bisphophonates are best sellers in the senior population. Older women tend to be the primary recipients of prescriptions for Actonel, Boniva and Fosamax because they’re geared toward stemming the loss of bone density. My problem with bisphosphonates is the quality of bone they ultimately yield, which can be brittle, and their questionable side effect profile. Patients and physicians have reported instances of “acute influenza-like illness”, arterial fibrillation, esophageal irritation, gastrointestinal upset, musculoskeletal complaints and osteonecrosis (bone death) of the jaw that appear to be associated with long term use of these medications. (1,2,3) 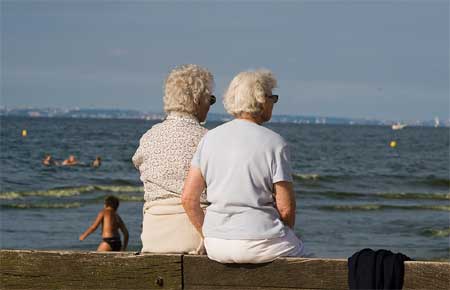 A new report from the 2010 IOF World Congress of Osteoporosis seems to offer a viable alternative to bisphophonates. The evidence is based on a randomized, double-blind, placebo-controlled study carried out on a nutrient/phytochemical supplement. Over the course of 6 months, geniVida™ Bone Blend was shown to increase bone mineral density by up to 3.4% in a group of 58 “healthy, early post-menopausal women” between the ages of 45 to 55. (4)

In the United States, this multi-nutrient blend, consisting of 1,460 mg of fish oil concentrate, 30 mg of genistein, 800 IUs of Vitamin D and 100 mcg of Vitamin K1, is sold under the name Bonistein Max by Douglas Laboratories. It features a soy-free phytoestrogen (genistein) which was previously investigated and found helpful with other menopausal-related symptoms such as hot flashes. In the osteoporosis trial, the researchers provided the study volunteers with the Bonistein Max formula + 500 mg of calcium daily or a placebo which consisted of 500 mg of calcium/day over a 6 month period. (5,6,7)

If these encouraging results can be replicated, there is a real possibility that this nutraceutical formula could be used in place of or in conjunction with bisphosphonate drugs. In the meantime, at least we have some indication of the relative safety of this bone building supplement. Most of the ingredients contained in it have been widely studied over the past few decades, namely fish oil, Vitamins D and K. The only “wild card” in the bunch is the geniVida™ component of the blend.

Several investigations carried out over the past 5 years offer preliminary support for the safety of this “novel product containing 98.5% synthetic genistein aglycone” at dosages up to 300 mg per day – 10 times the amount used in the current study. A recent 12 week trial evaluating the effects of geniVida™ on hot flash incidence determined that there were no changes in endometrial thickness, hormone levels and other adverse reactions that would be anticipated in those using conventional hormone replacement therapy. (8,9,10)

One of the more interesting aspects of this bone building formula is hinted at in a 2005 paper appearing in the Journal of Physiological Pharmacology. It describes the similarities between genistein and a form of estrogen referred to as 17 beta-estradiol. A study from March 2008 adds relevance to this connection by revealing that a combination of fish oil (DHA) and 17 beta-estradiol is capable of preserving bone density. But what’s really fascinating about that particular experiment is that it failed to find the same benefit from a combination of DHA and phytoestrogens (plant-based estrogens). How then can we explain the positive findings reported at this year’s World of Congress of Osteoporosis? It’s hard to say for certain, but it’s possible that the combination/synergism of all of the nutrients in Bonistein Max is what’s making the difference. Or perhaps the highly-purified, non-soy form of genistein (geniVida™) more closely resembles the activity provided by 17 beta-estradiol as compared to un-purified, soy-based forms of genistein. (11,12,13)

The information presented today can best be described as a preliminary “report from the field”. In fact, the primary study in question has not yet been published in a peer-reviewed medical journal. But I felt it was worth discussing because there’s a desperate need for safer osteopenia and osteoporosis alternatives for the aging population. Much of the data upon which we rely in the alternative and complementary community is based on incomplete information. There simply isn’t as much research for making decisions as can be found in the realm of conventional medicine. So we’re left with a dilemma: Do we use well researched but questionable, conventional medications? Or, do we take a chance on a more natural approach that doesn’t have nearly as much documentation to back up its claims? This is an important consideration that needs to be made in concert with your health care providers who know the entirety of your medical history.