Hippocrates, the much revered ancient Greek physician and “father of Western medicine”, is reputed to have said, “Let food be thy medicine and medicine be thy food”. Modern science continually supports his notion that common, everyday foods can indeed possess medicinal properties. But that doesn’t mean that every natural food will be therapeutic under every circumstance. Rather, researchers need to study nutritional medicine meticulously on a case-by-case basis. 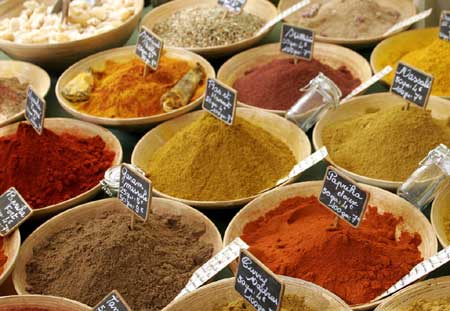 The cooking process is usually required for the enjoyment and safety of beef, chicken, fish, pork and many other varieties of meat. However the high heat generated from barbecuing, frying and grilling can interact with proteins in these foods and create carcinogenic byproducts known as heterocyclic amines (HCAs). Eating HCAs on a regular basis appears to increase the risk of developing many malignancies including breast, colorectal, lung, stomach and prostate cancer. Current research from around the world suggests that marinading and seasoning foods with spices such as ginger, hibiscus, rosemary and turmeric can inhibit HCA production by up 79%. Dr. J. Scott Smith, a food chemistry processor at the University of Arkansas, theorizes that “antioxidant spices with phenolic compounds can block HCAs before they form during the heating and still allow high temperatures to be maintained”. In other words, antioxidant-rich marinades and spice rubs may allow you to “have your steak and eat it too”. (1,2,3,4)

Barrett’s esophagus is an inflammatory condition characterized by damage to the lower esophagus caused by repeated exposure to stomach acid. It’s often diagnosed in patients living with gastroesophageal reflux disease (GERD) and is worrisome because it’s been associated with an increased risk of esophageal cancer. According to preliminary research, eating berries may provide a chemopreventive effect against esophageal carcinogenesis. Researchers at Ohio State University discovered that feeding cancer prone rats a diet consisting of 5% berries is “effective in inhibiting NMBA-induced tumorigenesis in the rat esophagus”. Reductions in inflammatory markers and an increase in antioxidant capacity was noted. In all, seven different types of berries were evaluated in the experiment – acai, black raspberries, blueberries, noni, red raspberries, strawberries and wolfberries. They were all found “equally capable of inhibiting tumor progression … in spite of known differences in levels of anthocyanins and ellagitannins” – phytochemicals with documented anti-cancer activity. (5,6)

Berry Extracts May Discourage the Growth of Esophageal Cancer

A new review published in the Archives of Internal Medicine provides the most comprehensive data yet about the cholesterol-lowering effects of nut consumption. A total of 25 studies conducted in 7 countries and involving 583 men and women where included in this scientific summary. On average, the intervention trials asked the study volunteers to consume 67 grams of nuts or just over 2 ounces per day.

The cardiovascular benefits of nuts extend beyond a simple shift in lipid levels. The May 2010 issue of the British Journal of Nutrition points out that nut consumption may also play an important role in those at risk for metabolic syndrome – a combination of health risks that involve poor blood sugar control and a variety of cardiovascular risk markers such as elevated lipids (cholesterol and triglycerides) and high blood pressure. Researchers at the University of Toronto believe that nuts may reduce post-meal blood sugar fluctuations when eaten with carbohydrate rich foods. In addition, nuts prompt only minor elevations in blood sugar when eaten alone. These factors, in combination with the high nutrient density of nuts which provide “a good source of vegetable protein and are rich in fiber, vitamins and minerals”, lead the Canadian scientists to conclude that, “the inclusion of nuts in the diets of individuals with diabetes and metabolic syndrome is warranted, in view of their potential to reduce CHD (coronary heart disease) risk”. (7,8)

In practical terms, here’s how I would apply the above information. Whenever you bake, barbecue, broil, fry or grill meat, consider marinading or seasoning it liberally with antioxidant-rich herbs and spices. If you have frequent heartburn or if you’ve been diagnosed with Barrett’s esophagus, try including plenty of berries in your diet and make sure to have your doctor monitor your condition to rule out the potential development of malignant esophageal cells. Finally, consider eating plenty of nuts and seeds if you want to manage your blood sugar and cholesterol naturally. I can’t say for sure, but I think Hippocrates would approve of my advice.