Here’s an age old question: “Do you need to see something in order to believe it?”. The answer for some is “yes” and many require visual proof before they can accept something as legitimate or real. But there’s a whole other camp of thought. Some ascribe to the notion that you must first believe something is possible before you’re capable of seeing it. There isn’t a chance in the world that I can negotiate an agreement between these two schools of thought. However, a recent post on Twitter adds an interesting twist to this debate. 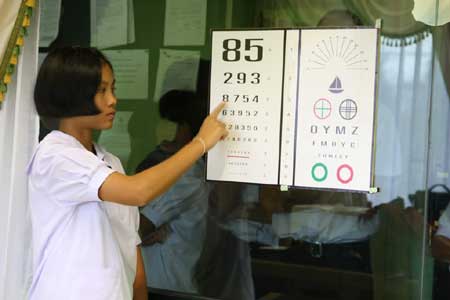 Dr. Mehmet Oz recently posted a message about a new study from the latest edition of the journal Psychological Science. In it, a psychologist from Harvard, Dr. Ellen Langer, authored research which clearly demonstrates that believing you can see better can positively affect visual clarity. Three tests were used to establish whether “manipulating mind-sets” of study volunteers could enhance visual performance. The first involved the use of a “realistic flight simulator”. The second examined the effects of physical activity on vision. The third employed a traditional eye chart. In each instance, the researchers primed certain participants by increasing their expectation of good performance in the respective challenges. The results indicate that those who were encouraged to feel confident about their ocular skills outperformed the control group – which did not benefit from any such support. The net result was visual improvement during the flight simulation, physical activity (jumping jacks) and the traditional eye exam. These findings strengthen the case for utilizing mind/body approaches to enhance virtually any function of the body via the mind. (1,2)

Dr. Kim Newell is a pediatrician practicing in San Francisco, California. She has a very interesting background which includes an undergraduate degree in religion from Princeton University and a formal medical education from the University of Pennsylvania and the University of California, San Francisco. In addition, “Dr. Kim” has spent time working in hospitals in Guatemala, Uganda and the Navajo reservation in New Mexico. I was gratified to see that she’s also open to the idea of alternative and complementary medicine. One of her current posts on Twitter cites a study on a probiotic drink commonly known as Danactive. The trial in question was conducted at Georgetown University and involved 638 children attending daycare or school. Half of the young participants was given a yogurt drink without any added probiotics and the remainder received an identical beverage with the addition of the probiotic strain Lactobacillus casei DN-114 001. Over the course of 90 days, the researchers examined the incidence of “common infectious diseases” (CIDs) and any “change of behavior because of illness”. The kids receiving the probiotic-enhanced dairy drink exhibited 19% fewer CIDs. This lead the authors of the study to conclude that, “Daily intake of a fermented dairy drink containing the probiotic strain L. casei DN-114 001 showed some promise in reducing overall incidence of illness”. The one quibble I have with the study design is that both test beverages contained an unacceptably high sugar content – 19 grams of added sugar per serving. In my opinion, that alone can have a compromising effect on immune function. (3,4)

Fred Hahn, the author of the best selling books The Slow Burn Fitness Revolution and Strong Kids Healthy Kids wonders whether you’re eating enough protein. His concern is that many people are lacking in this vital macro-nutrient which may contribute to hastened aging. According to Hahn, “A good general guide for protein intake is to get about 1 gram of quality protein per pound of your target body weight. So if you currently weigh 200 pounds but should really weigh 140, you’d want to shoot for 140 grams of quality protein per day”. He goes on to describe his idea of quality protein sources. They include beef, chicken, eggs, fish, nuts and pork. I agree with Fred about the importance of adequate protein in the average diet. We’re also in the same boat when generally recommending the replacement of high-glycemic carbohydrates with healthy sources of fat and protein. Please keep in mind that these suggestions aren’t only directed at those who are interested in building muscle. Optimal protein consumption is necessary for so much more than maintenance of bone density, cell signaling, healthy blood sugar control and weight maintenance. (5,6,7)

What’s the common link between one of the most famous doctors in the world, a lesser known pediatrician from Northern California and an exercise specialist who believes that slow motion strength training is the healthiest way to build muscle? All of these individuals care enough to share their resources with anyone who chooses to follow them on Twitter. I consider these disparate health professionals to be my brothers and sisters in the fight to reclaim true wellness worldwide. We’re each trying to do our small part to make that hope a reality. I truly believe it can happen and is already taking place. I believe it and I see it.