There’s a big difference between the transient use of medications for acute conditions and long term administration in cases of chronic health concerns. Take one of the oldest remedies known to mankind: aspirin. An occasional aspirin to relieve a headache is significantly different than using it on a daily basis to help reduce the risk of a heart attack. In the short term, aspirin is unlikely to result in many side effects. But regular usage can provoke a number of serious adverse reactions and therapeutic effects. This is why it’s important for physicians to assess the expected benefits and risks of aspirin therapy prior to prescribing it. The same principle should hold true with regard to any medication that you may need to take for years upon years. (1,2) 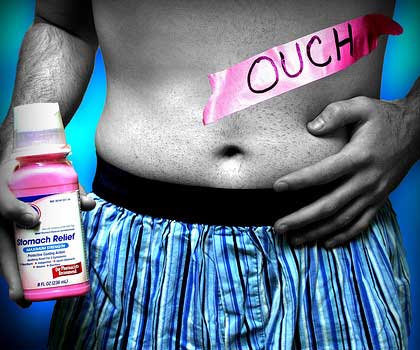 In May 2010, a series of critical papers was published in the Archives of Internal Medicine that focused on how doctors are currently prescribing proton pump inhibitors (PPIs) – a class of medications that are used to suppress stomach acid production in patients with conditions such as Barrett’s esophagus, GERD (gastroesophageal reflux disease) and ulcers. It’s estimated that each year over 113 million prescriptions are written for PPIs in the US alone. What’s more, the staggering cost for these prescription drugs registers at nearly $14 billion in sales.

It would be one thing if the number of prescriptions written matched the actual needs of the patients being treated. However a recent analysis entitled, “Failing the Acid Test”, suggests that up to 69% of prescribed PPIs are being used inappropriately. Perhaps the most common misapplication of PPIs is in patients with dyspepsia, otherwise known as indigestion. (3) Here’s a brief review of some of the other findings presented in this ground breaking summary of modern PPI therapy:

Health risks aside, part of the reason for the popularity of PPIs is that many people live with gastrointestinal (GI) symptoms that lead them to believe that they require pharmacological assistance. The compelling advertisements on television and the willingness of doctors to prescribe PPIs indiscriminately isn’t helping matters. This is a recipe for disaster. But fortunately there are some alternative strategies that address the same GI discomfort without having to resort to potentially dangerous medications.

Several recent studies point to the use of acupuncture as one viable alternative for various gastrointestinal motility disorders such as functional dyspepsia, GERD and even irritable bowel syndrome. For instance, a trial published in November 2007 concluded that combining acupuncture with PPI therapy was more effective than using higher dosages of PPIs alone. Another experiment from 2007 tested a specific variety of acupuncture on 80 patients living with GERD. In that inquiry, “acupoint drug-finger” therapy outperformed drug treatment in terms of efficacy and safety. The researchers of that trial went so far as to employ the use of an endoscopic examination which revealed that acupuncture afforded “obvious amelioration in esophagitis”. This suggests not just symptomatic improvement but actual healing. (8,9,10)

One of the most troublesome aspects of the current PPI controversy is that many physicians fail to adequately discuss lifestyle modification measures prior to resorting to prescribing medication. Some of the clinically proven lifestyle options include avoiding alcohol and tobacco, dietary changes and elevating the head of the bed. One of my favorite integrative health practitioners, Dr. Leo Galland, recently offered several additional recommendations that I’d like to pass along to you. (11,12)

Dr. Galland also suggests taking a mixture of calcium citrate powder and powdered digestive enzymes after each meal. The dosage he mentions is 250 of elemental calcium and 1/2 a teaspoon of enzymes. Dr. Galland claims that calcium strengthens the LES valve and that the enzymes reduce the risk of stomach distension. However he’s quick to point out that heartburn symptoms can sometimes be a sign of more serious issues such as gallbladder disease, a heart attack or an ulcer. Therefore, he urges a proper evaluation by a health care professional before applying any specific treatment protocol.

In closing, I want to mention one other observation that Dr. Galland and other health authorities have frequently made. Some long time users of PPIs notice that their symptoms get worse after discontinuing medication. This is likely the result of a hyperacidic reaction provoked by the removal of the PPI itself. It is not necessarily a sign that halting use of the medicine is harmful or a mistake. Slowly reducing the dosage, under the guidance of your health care team, may help to limit this unpleasant reaction.