One of my least favorite sayings is, “Everything in moderation”. I think it’s a problematic piece of advice for many people who think they need such guidance in the first place. You wouldn’t tell a mother to let her child eat lead-based paint in moderation. It would be foolhardy to suggest to an alcoholic or drug addict to indulge every once in awhile, provided that it’s done moderately. So why then do family, friends, nutritionists and physicians insist on passing along this ubiquitous adage when it comes to eating unhealthy food? In my opinion, it’s largely rooted in a belief that most people just aren’t capable of doing what’s right for themselves on a long term basis. But I think there’s a better solution. 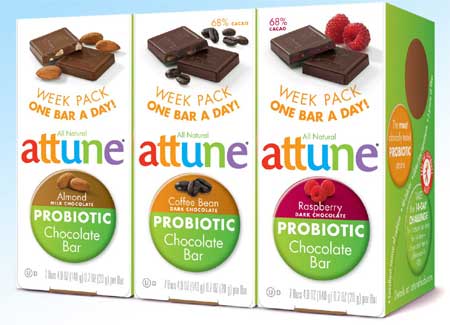 I firmly believe that you cannot attain true wellness unless you approach your health care in a conscious manner. In my consulting work, I don’t recommend that my clients avoid treating themselves to delicious food. However, I most certainly ask them to look for options that satisfy their nutritional and sensory needs in equal proportions.

What’s special about these chocolaty treats is that they’re fortified with over 6 billion healthy bacteria cultures per bar. In addition, they contain a prebiotic known as inulin which supports that the growth and proliferation of healthy bacteria in the digestive system. The three bars I’ve specifically mentioned are also free of common allergens such dairy and wheat.

While it’s true that each serving of Attune Probiotic Chocolate Bars yields between 3 to 4 grams of added sugar, this is a compromise that is well worth making for many health conscious consumers. In fact, a recent study published in the Journal of Agricultural Food Chemistry determined that adding sugar to cocoa extracts may very well increase the absorption and retention of health promoting phytochemicals contained in dark chocolate. That same experiment found that adding milk to the mix had the opposite effect. Another current investigation surmised that adding high amounts of fat to a cocoa blend lowered the quantity of naturally occurring antioxidants such as flavonoids, polyphenols and proanthocyanidins. All together, this bodes well for this line of Attune products because they contain small amounts of sugar, no dairy and are relatively low in fat. (1,2) 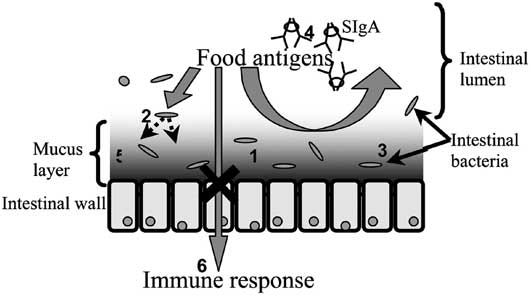 The cocoa aspect of the Attune bars is really secondary to the probiotic content. These are, in effect, probiotic supplements masquerading as chocolate bars. That’s not to say that the cocoa content isn’t of value. It is. However most people who’d consider using this functional food will do so because it provides a large concentration of healthy bacteria that can benefit the body from head to toe. (3,4,5)

To be specific, the bars contain a blend of three carefully chosen strains of probiotics: Bifidobacterium lactis, Lactobacillus acidophillus and Lactobacillus casei. According to the company, all three are certified as GRAS (generally recognized as safe) and Kosher. A cursory review of the recent medical literature indicates that combinations and the singular application of these probiotics may: 1) prevent “the development of eczema in infants at high risk of allergy during the first year of life”; 2) effectively manage antibiotic-associated diarrhea and Clostridium difficile-associated diarrhea in hospitalized patients; 3) improve immune function and reduce the incidence of common respiratory infections in children and seniors alike. (6,7,8,9,10)

The bottom line is that I think these probiotic bars can be healthfully incorporated into most diet plans if needed or desired. I think they’re unlikely to cause a significant elevation in blood sugar or instigate a binge eating cycle in most people. But if you’re at risk for either of these conditions or others, experiment with caution. Make a conscious decision about whether or not to try them and, if you do, carefully evaluate how they affect your individual physiology and psychology. If you can enjoy them in good health, use them as directed. You could very well benefit from their therapeutic potential. However, if they trigger unwanted cravings or inappropriate spikes in your blood glucose readings, avoid them altogether. In the latter case, do not use moderation.