Parents face many challenges trying to raise healthy children. Convincing kids to eat enough non-starchy vegetables is at the top of that list. This is no accident. Among other reasons, food manufacturers spend millions upon of millions of dollars “educating” the youth market on what’s cool to eat. But with a little creative parenting, there are ways of outsmarting finicky youngsters and junk food marketers at the same time. 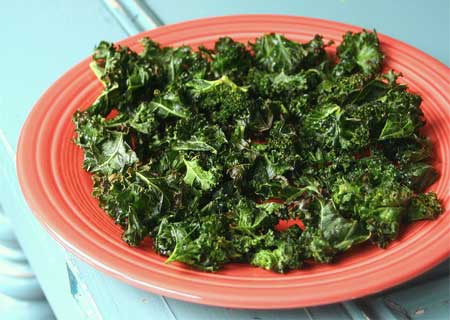 One strategy that works quite well is to focus on characteristics in unhealthy foods that children enjoy while avoiding elements that they generally find offensive. If you walk down the snack isle of many markets, you’ll notice that crunchy and sweet treats are omnipresent. On the other hand, bitter or more robust tasting snack items are scarce. By identifying what sells, one can discover how to make a healthier alternative.

Kale is an incredibly healthy vegetable. It’s an excellent source of fiber, health promoting phytochemicals and nutrients such as pro-vitamin A, Vitamin C and K. However it’s a tough sell to kids because of its rather assertive flavor. The texture is another point of contention. Many youngsters aren’t big fans of sauteed vegetables or vegetable soup – two common ways of incorporating kale into your diet. “Fried” kale is another story.

Today’s recipe draws upon the love of potato chips as a springboard for introducing more kale into the diets of adults and children alike. One of the more important reasons to make this a priority is the previously mentioned Vitamin K content of kale. Recent studies indicate that various populations such as the elderly and “young adults” are often lacking in the Vitamin K department which is commonly referred to as hypovitaminosis K. In the case of young adults, this likely has to do with insufficient intake of green leafy vegetables. In the senior population it may reflect compromised absorption. There is also evidence that excess body fat may trap Vitamin K (in fatty tissue) rather than allowing it to circulate in the blood. Trapped Vitamin K or phylloquinone cannot perform its typical functions, such as promoting the proper clotting of blood and supporting cardiovascular, diabetic and skeletal health. Since overweight is common among all age groups, so to is the potential for poor Vitamin K status. (1,2,3,4,5,6)

The good news about my Indian Crispy Kale recipe is that it not only provides a great source of Vitamin K, but also helps to facilitate its absorption. Vitamin K is a fat soluble nutrient. Eating foods rich in phylloquinone alongside healthy fats can dramatically improve the bioavailability of Vitamin K. As an added bonus, you may even lose some weight by replacing potato chips with crispy kale. (7,8,9,10,11)

NutraSalt or salt to taste

Pre-heat the oven to 350°F . Wash the kale. I know the bag undoubtedly says that it’s been “pre-washed”. Wash it anyway! It’ll be fresher tasting and possibly safer if you do. Place the washed kale into a salad spinner and dry thoroughly. Remove the clean greens from the spinner and further pat them dry with paper towels. It’s vital that the leaves be as water-free as possible in order to avoid a soggy end product. Dump the dry kale into a bowl and lightly toss with extra virgin olive oil. Put a single row of the kale leaves directly on a baking sheet and season with a light dusting of Garam Masala and salt. Bake for 10 minutes and then flip the kale leaves and cook for another 10 minutes. You can also use un-bagged curly or Tuscan kale. The only difference is that you’ll need to remove the center stem and tear up the leaves into relatively uniform bite-sized pieces. (12)

I’m not including the calorie count because it really is negligible. The majority of the caloric density comes from the extra virgin olive oil. I think it’s virtually pointless to even factor in the scant calories present in the kale or the Garam Masala. 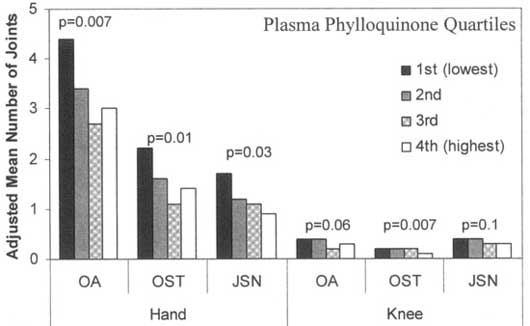 Kale and Garam Masala are frequently paired because of their harmonious flavor profiles. But I chose to include this Indian spice blend for another reason as well. Several studies from the 1990’s describe some highly beneficial attributes of this seasoning which is made up of cardamom, cinnamon, cloves, coriander and peppercorns. The findings of these scientific trials indicate that Garam Masala: a) can improve constipation by hastening intestinal transit time; b) reduce the risk of chemically induced cancer in a mouse model; c) assist detoxification via an upregulation of liver detoxifying enzyme production. (13,14,15)

Many people would benefit from the addition of more green leafy vegetables in their diets. However, this recommendation needs additional scrutiny if you happen to be on anticoagulant therapy or “blood thinners”. This is a rather complicated medical issue in which researchers find both pros and cons in relation to increasing dietary Vitamin K intake. The best plan of action is to discuss the safety of eating more phylloquinone-rich foods with your cardiologist prior to changing your normal eating habits. However, if you’re in good health or would like to achieve better health, then you may want to consider including more kale in your regular routine. (16,17,18)