My wife and I had the pleasure of celebrating Father’s Day with my parents and sister this past weekend. It may come as no surprise, but the topic of health almost always pops up whenever we get together. The unfortunate reality is that some of the stories we discuss are rather sobering. For instance, my mother mentioned an old friend of the family who is now in her late 90’s. Apparently she’s lost much of her appetite so that her nutritional outlook isn’t very promising. This is particularly troubling because getting adequate nutrition is all the more important for seniors. This exchange with my mom inspired the following two recipes. 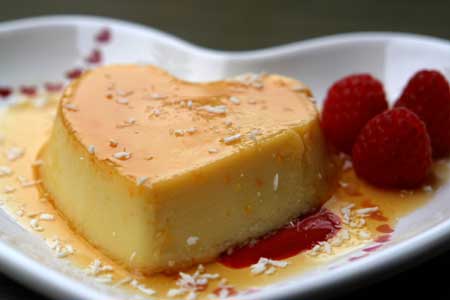 On Thursday of last week I cited a study about the brain-enhancing properties of medium chain triglycerides or MCTs. The single greatest source of MCTs is coconut oil. The biggest problem with getting people to eat more coconut oil is the fear of saturated fat, of which coconut oil contains a significant amount. But rest assured that unrefined coconut oil affects the body in a much different way than the refined/hydrogenated variety that is often used in scientific studies. In fact, a recent experiment determined that women supplementing with trans-fat-free coconut oil increased their HDL (“good”) cholesterol, lowered their LDL (“bad”) to HDL cholesterol ratio and exhibited a reduction in abdominal fat. (1,2,3)

In my experience, sweets is one food category that still often appeals to those who are lacking a hearty appetite. Sweet snacks tend to be calorically dense, but have the unfortunate downside of providing mostly empty calories. I believe that the recipes in today’s column combine the best of both worlds. They’re dessert-like, easy to eat, high in calories and also rich in MCTs and other valuable nutrients necessary for optimal cognitive functioning.

Pre-heat the oven to 325 °F. Fill a teapot with water and heat to a simmer. Combine all of the ingredients in a large bowl and mix using an electric hand blender. Pour the mixture into five ramekins (6 oz in size). Place ramekins into a large baking dish that is at least 2 inches deep. Then pour the hot water in the space surrounding the ramekins – allowing the liquid to reach about half-way up the sides of the ramekins. Bake for approximately 40 to 45 minutes or until the flan is set (when a toothpick comes out clean from the center).

Please note that this coconut flan isn’t very sweet. You can experiment with using a little more stevia or alternate sweeteners if you prefer a sweeter taste.

Toast the shredded coconut and walnuts in a 300°F oven – 7 minutes (coconut) and 10 minutes (walnuts). Heat the cocoa powder and coconut oil in a small pot on the stove top using a very low setting. Dissolve the cocoa powder completely in the oil and then add the cream, sweetener and vanilla extract. Stir until completely blended. Finally, fold in the toasted coconut and walnuts. Place a sheet of parchment paper on a baking pan or sheet. Poor the contents of the pot onto the parchment paper and spread it out evenly. Allow the bark to cool in the refrigerator or freezer. Once it’s fully set, break the bark into bite-sized pieces and keep it refrigerated – while it lasts!

From a nutritional standpoint, the best thing about these recipes is that the ingredients have been shown to protect against age-related changes to the brain and various chemical and environmental insults. A cursory examination of recent medical literature indicates that:

You’ve probably noticed that I exclusively use natural sweeteners in the recipes I post here. This is by design. I prefer using all-natural ingredients whenever possible. But I’ve consulted with enough clients to know that some people simply don’t enjoy the taste of stevia-based sweeteners. My hope is that one day there will be stevia extracts available that taste good to the vast majority of the population. However, that day is not yet here. So if you’re one of those people who simply cannot tolerate stevia, then feel free to use other sugar-free sweeteners instead. In our household that means that we sometimes use sucralose or Splenda because my wife doesn’t like stevia. And while I’m not a big fan of Splenda, I do believe that it’s a better alternative to sugar for most people. This puts me at odds with some other authorities in the natural health community. But I believe this is a compromise worth making.