If you’re one of the millions of people who suffer from chronic sinus headaches, today’s column is for you. Several weeks ago my wife was in the throes of a severe sinus headache that had lasted several days. Nothing we tried seemed to help drain her sinuses at all. That is, until she came across a home remedy on the Internet that was attributed to one Dr. Lisa DeStefano. Prior to trying it out we were both highly skeptical. But that soon changed. My Healthy Monday tip of the week is to apply rhythmic pressure to your ethmoid and vomer bone in order to promote sinus drainage. Details to follow. 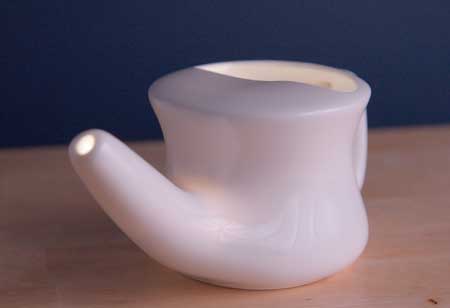 After witnessing the seemingly miraculous effects of this simple exercise I decided to try to track down Dr. DeStefano. I needed to know if this was a fluke experience or perhaps just a placebo effect. To be honest I still wasn’t convinced that the information we tried out of desperation was legitimate. I was pleasantly surprised to find that Dr. DeStefano was in fact an authority in osteopathic manipulative medicine. In fact, she is the chairperson and assistant professor at the Michigan State University College of Osteopathic Medicine. That initial communication lead to the following interview.

JP – Can you please give us a brief overview of the anatomy of the sinuses and how it relates to sinus headaches?

Dr. DeStefano – There are four pairs of paranasal sinuses each is named for the bone which they are in. The largest is the maxillary sinus located in the maxillary bone or cheekbones under the eyes. This is typically where most people experience pain when they have a sinus headache. The ethmoid sinuses are located between the eyes and nose. The sphenoid sinuses are located further back in the head behind the nose and eyes. The frontal sinuses are located above the eyebrows in the forehead. Each sinus is lined with soft tissue that produces mucous. All the sinuses drain into the back of the nose and into the throat. If the sinus cannot drain properly it becomes congested and signals to the brain that there is pressure within the sinus which can be interpreted as pain.

JP – How does applying rhythmic pressure to the ethmoid and vomer bone affect sinus congestion?

Dr. DeStefano – In the living person all the bones of the face have a varying capability to be deformed under pressure. Much like your rib cage can move if you press on one of its bones. Gently pressing the area between the eyebrows deforms the frontal bone and the ethmoid which sits right behind it. Alternately thrusting the tongue upwards on the hard palate deforms the maxilla and the vomer which sits right above it. This rhythmic volleying of subtle gentle motion allows the other bones that surround the sinuses to begin to billow a bit. It might be a small amount, but this motion is often enough to push fluid out of the sinuses. 20-30 seconds of gentle rhythmic billowing is all that is necessary.

JP – Is this exercise something you feel comfortable recommending in your own practice? If so, what type of success have you found?

Dr. DeStefano – I do suggest this in my practice; from my experience most everyone has some short increase in post nasal drainage as a result of this technique. Not everyone has relief however. Much of the success depends on the overall plasticity of the bones in the face and the degree of mucous membrane inflammation.

JP – Are there other natural techniques that can provide additional support when needed?

Dr. DeStefano – When my patients have chronic sinus problems I begin by treating them using cranial osteopathic techniques thus giving them the capability to naturally drain their sinuses. I often will suggest they stop using drying agents such as Sudafed because of the risk of rebound congestion and because it is very difficult to dry a chamber that is meant to be moist, often times what is left is sludge which will attract more moisture from the mucous membranes. I like salt water sprays and Neti pots as they will gently decongest the nasal membranes allowing the sinuses openings to become wider. These however cannot affect the sinuses themselves.

JP – Do you incorporate dietary or environmental interventions as part of a holistic treating plan?

Dr. DeStefano also offered this concise, step-by-step guide to applying her technique: “Forget Sudafed. An easier, quicker, and cheaper way to relieve sinus pressure is by alternately and gently thrusting your tongue against the roof of your mouth, then pressing between your eyebrows with one finger. This rhythmic pressure causes the ethmoid and vomer bone, which runs through the nasal passages to the mouth, to rock back and forth. The motion loosens congestion: after 20 seconds, you will feel your sinuses start to drain.”

Modern science likewise supports incorporating neti pots and/or saline irrigation into natural sinus care regimens. The latest study on the matter was published in December 2009. It found that saline nasal irrigation provided significant improvements in the quality of life of children with acute sinusitis. The authors of the study noted symptomatic amelioration of cough, natural congestion, rhinorrhea (runny nose), sleeplessness and throat itching. (1,2,3)

While researching Dr. DeStefano’s comments about the utility of anti-inflammatory diets I discovered a scientific paper that suggests that alternate day fasting (ADF) may be a good way to promote sinus health. Researchers from Louisiana State University Medical Center report that rapid improvements in chronic sinusitis are often found in patients who adhere to an ADF program. Hopefully, future studies will continue to validate the link between diet and sinusitis scientifically. In the meantime, it’s good to know that there are safe and viable tools available courtesy of fine physicians such as Dr. Lisa DeStefano. (4)