Long before the advent of alarm clocks, the Sun served as mankind’s lone wake-up call. Conversely, when the dark hours of night rolled around it was an obvious reminder to rest and allow the body to recover from the active day that preceded. This was the logical pattern that served countless generations well, but that has largely been abandoned in modern times. While it’s impractical to try and reclaim this traditional sleep-wake cycle, it may be wise to inch closer to it in ways that fit our schedules. 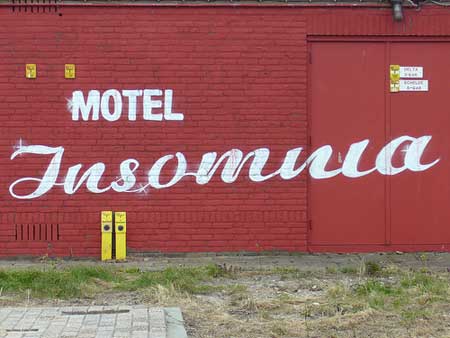 One of the physicians I follow of Twitter is Dr. Bill Yates. His penchant for neuroscientific research often yields fascinating tweets that spur my imagination. A few days ago he described a recent trial that evaluated the effects of a nutraceutical formula in patients with sleep disorders. The supplement in question contains a blend of 5-hydroxytryptophan, choline bitartrate, cocoa, GABA, Ginkgo biloba, glutamic acid and grape seed extract. The ingredients are intended “to increase the function of the neurotransmitters serotonin, acetylcholine, and GABA in patients with sleep disorders”. In the one-week study, 18 patients were randomized to receive the active treatment (Gabadone) or a placebo. Those given the GABA supplement demonstrated significant improvements in sleep latency, from 32.3 minutes at baseline to 19.1 minutes, and sleep duration improved from 5 hours/night to 6.83 hours/night. (1,2,3)

Before I get into the nuts and bolts of the next tweet, I’d like to point out an often neglected consequence of sleep inadequacy – bone loss. Osteopenia and osteoporosis are generally considered “comorbid conditions” associated with poor sleep quality. One possible reason is that the “sleep hormone”, melatonin, has been shown to increase bone density in animal models of postmenopausal osteoporosis. (4,5,6)

A current message by Dr. Joseph Pizzorno, the president of Bastyr University, suggests that Vitamin D supplementation may reduce the risk of a rare but serious side effect associated with medications used to treat bone loss. The adverse effect he’s alluding to is osteonecrosis of the jaw (osteo = bone; necrosis = death of tissue). Several popular bisphosphonate drugs fall into this category including Actonel, Boniva and Fosamax. A new study appearing in the June 2010 issue of the Journal of Bone Mineral Research indicates that optimal levels of Vitamin D may reduce the likelihood of this dreaded outcome. In that research, Vitamin D deficiency + bisphosphonate treatment lead to a 66.7% higher risk of developing jaw osteonecrosis (ONJ). This isn’t the first time that a link between insufficient Vitamin D and ONJ has been proposed. But, hopefully, this current experiment will encourage those prescribing and using bisphosphonates to ensure that Vitamin D status is taken into account. (7,8,9,10,11)

GABA Levels are Reduced in Insomniacs

The healing power of nature is enthusiastically embraced by Dr. Orna Izakson. This is evidenced by a recent tweet in which she describes an “insanely cool” form of nature therapy referred to as “Shinrin-yoku” or forest bathing. In her post, Dr. Izakson links to a column appearing in the New York Times health section. The author of the NYT piece concluded that, “exposure to plants and trees seems to benefit health”. I wholeheartedly agree. Three recent publications in the journal Environmental Health and Preventive Medicine report that spending time in a forest environment where you can smell “the odor of wood”, hear “the sound of running water” and enjoy “the scenery of the forest”: a) improves long term immune function via increased natural killer cell activity; b) lowers blood pressure, cortisol (a stress hormone) and pulse rate. (12,13,14,15,16)

All of the tweets I’ve highlighted today are interconnected. Getting a good night’s sleep not only improves overall quality of life, but may also support the skeletal system. Spending time outside in the sun will naturally elevate Vitamin D levels, which promotes stronger bones and, possibly, lowers the risk of adverse reactions to conventional “bone-building” medications. Last, but not least, communing with nature lowers cortisol concentrations and could, thereby, slow down age-related loss of bone density. These findings share one primary link: Paying close attention to the needs of the human body can potentially find far reaching side-benefits. This is a core principle of holistic medicine.