Much of the potential and risk associated with the natural health industry involves the issue of responsibility. Who is responsible for ensuring the efficacy and safety of natural remedies? In terms of oversight, consumers must rely on watchdogs within the natural health industry itself and the US Food and Drug Administration (FDA). However, many people feel let down by this agency. That’s why we consumers need to get involved in the process. I think the best way is to become informed about the actual research behind these products rather than the glossy marketing and superficial propaganda put out by detractors and proponents alike. 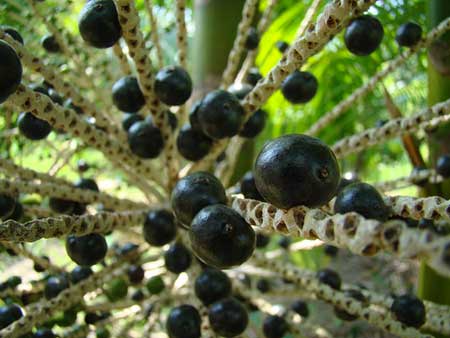 Buying questionable and/or unsafe supplements promotes a commercial environment that encourages the future sale of similarly disreputable products. For better or worse, the natural health industry is largely driven by sales trends. It should be about more than that, but often it is not. Once you accept that reality, you can begin playing a part in shaping the current state of the industry. Supporting legitimate products and shunning those that are promoted in an irresponsible manner is the most impactful way to accomplish this goal. But the first step is to identify which camp each product falls into.

Acai berries (Euterpe oleracea) are either a miracle “superfruit” or an outright fraud depending on who you ask. If you visit health food stores regularly or read natural health magazines you’ve surely come across juices and supplements containing extracts of this Amazonian palm fruit. It’s quite possible that you’ve even had a friend or neighbor offer to sell you a bottle of acai because it’s a regular fixture in the multi-level marketing community as well.

The hype involving acai (ah-sigh-EE) primarily has to do with its unique chemical composition. The pulp of the fruit is a rich source of antioxidants, dietary fiber and health promoting fatty acids. This much is well established in the medical literature and forms the basis for the optimism revolving around this supplement. What’s more, scientists are continually discovering previously unknown elements in acai which may confer some of the potent antioxidant activity demonstrated in numerous laboratory experiments. (1,2,3,4,5,6,7,8,9)

Clinical studies conducted in animal and human models go a long way toward establishing the validity of a functional food or nutritional supplement. Intervention trials involving human volunteers are naturally preferable, but they’re also quite expensive and relatively rare. So let’s examine the most noteworthy in-vivo studies that have been published in peer-reviewed, scientific journals over the past several years:

New research appearing in the May 2010 edition of the journal Toxicology supports the overall image of acai as relatively non-toxic. However, there are a few caveats to keep in mind. Firstly, the safety evaluation was conducted in-vitro and in an animal model – 220 rats were the study subjects. More importantly, the form of acai used in the experiment was an “acai pulp enriched fruit and berry juice”. Mixing small quantities of acai with other fruit juices is a common practice because consumers tend to prefer the taste of diluted acai (4% to 5%) as compared to more concentrated acai blends (20% to 40%). Observing this taste preference may be appealing to consumers and manufacturers, but it makes it nearly impossible to determine the safety of pure acai extracts which are common in the marketplace. (19,20,21)

While researching today’s blog I tried to get a sense of where other natural health experts stood on this issue. Dr. Andrew Weil hasn’t addressed this topic on his popular web site for a number of years. However, in 2006 he essentially took the position that acai simply didn’t have enough evidence to support it’s use over other berries. This more conservative point of view is not entirely shared by Dr. Mehmet Oz who considers acai to be one of the top “anti-aging” foods because of it’s hefty antioxidant content. Even the famed dermatologist, Dr. Nicholas Perricone, has weighed in on this topic. He’s a big fan of acai and notes the relatively high proportion of oleic acid contained therein. This is the same monounsaturated fatty acid which is believed to contribute to the health benefits attributed to olive oil. (22,23,24)

The measure of how I feel about any given supplement is whether or not I recommend it to my family and friends. To date, I have yet to suggest acai to anyone. On occasion I use a “chocolate green superfood” drink that includes acai as one of many ingredients. That doesn’t disturb me in the least. In fact, I’m not particularly concerned that acai will pose a danger in regular users. However, I have a big problem when certain manufacturers promote acai as a weight loss aid. This claim appears to be completely unfounded. Beyond that, the bottom line is that I’ve found little evidence that acai provides any health benefits beyond those found in better researched foods and supplements. As an example, an experiment from 2008 determined that pomegranate juice and several other beverages including black cherry juice and red wine possessed significantly higher antioxidant activity than acai juice. Factor in the higher price of acai juice and I think you’ll find that it’s just not a very good deal according to the evidence. (25)