Foods and natural remedies are frequently classified according to their most prominent features. Echinacea flowers and roots are generally thought of as immune boosters. Ginkgo biloba leaves are widely regarded as memory enhancers. And saffron stigmas are associated with the deep red color they impart to countless Eurasian dishes. Of the three examples, saffron is probably the least familiar in terms of medicinal potential. However, that is likely to change thanks to recent studies that are beginning to reveal new talents for this ancient spice. 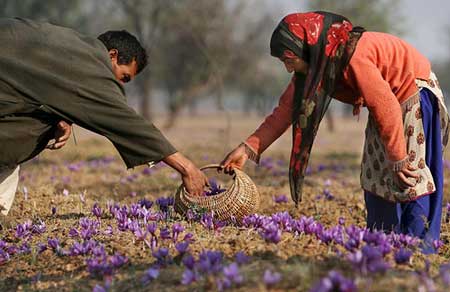 In May 2010, a small trial was published in the journal of Nutrition Research. It initially caught my attention while I was researching the topic of snacking. In the study, a natural medicine by the name of Satiereal was under investigation as a satiety enhancer. The active ingredient in Satiereal is Crocus sativus or saffron. Why test the hunger suppressing effects of saffron? The authors of the study report that saffron appears to possess a “mood-improving effect” which they hypothesized would result in reduced appetite and snacking.

To test this theory, 60 overweight women were enrolled in an 8 week placebo-controlled trial. Twice-daily, the women were provided with 1 capsule of Satiereal (176.5 mg/day) or an inactive placebo. All of the test subjects were asked to eat an unrestricted, normal diet. After two months, the participants using the saffron extract reported a decline in snacking and lost more weight than the control group. None of the women dropped out of the study due to side effects. (1)

By most accounts, the best selling natural mood enhancer is St. John’s wort and with good reason. It’s no exaggeration to say that hundreds of published studies attest to the psychoactive properties of this medicinal herb. Saffron can’t hold a candle to the sheer volume of research conducted on St. John’s wort. But the studies that have been published illustrate real promise in the field of mood disorders. (2)

Several of the more interesting trials involving saffron have compared it to conventional antidepressant medications: fluoxetine (Prozac) and imipramine (Tofranil). What’s more, all of the head-to-head studies utilized the preferred double-blind, randomized design which tends to yield the most reliable results.

Two other trials from 2005 and 2006 examined the efficacy and safety of saffron vs. a placebo. In both instances, the depressed patients receiving saffron demonstrated better outcomes as assessed by improvements on the Hamilton Depression Rating Scale. The side effect profiles were deemed equivalent. (6,7)

Saffron May Reduce the Severity of PMS Symptoms

Stress related overeating and snacking are hallmarks of the current obesity epidemic. Preliminary experiments in animal models point to an anxiolytic effect of saffron and its components. The first observation made was that a water-based extract of saffron reduced anxiety and increased total sleep time in mice. Further testing in rats identified two phytochemicals contained in saffron, crocin and safranal, which appear to be partially responsible for the relaxing and sleep enhancing effects. (8,9)

Other mind-body conditions including premenstrual syndrome (PMS) may also respond to saffron therapy. The administration of 30 mg/day of saffron over the course of two menstrual cycles significantly improved PMS discomfort in a group of women aged 20 to 45. The symptomatic relief was evidenced via changes in two objective measures: a Daily Symptom Report and the Hamilton Depression Rating Scale. The authors of the study urge further investigation into the applicability of saffron as an alternative treatment for PMS. However, they also emphasize the need to firmly establish the safety of chronic saffron use. (10)

The issue of safety cannot be overemphasized. Thus far, the majority of research published on saffron has reported an acceptable safety profile. But this appears to be mostly based on the subjective responses of the study volunteers. By that, I mean reports of adverse reactions such as dry mouth, headaches, nausea and the like. Unfortunately, blood tests and other laboratory indicators were not regularly employed in the studies I reviewed. The one exception is a safety trial that involved 30 men and women who were given a placebo or 200 mg to 400 mg of saffron daily for one week. Various blood tests, blood pressure and electrocardiographic parameters were reviewed in the analysis. Both dosages of saffron exhibited some potentially positive activity – improvements in mood and significantly lower arterial and systolic blood pressure. However, there were also a few distressing signs: a slight reduction in red blood cells, hematocrit, hemoglobin and platelets. There were also indications of possible kidney stress as evidenced by increased blood urea nitrogen and creatinine. The conclusion of the experiment states that “these alterations were in normal ranges and they were not important clinically”. The higher dosages used in the safety study should also be taken into account. Nonetheless, this an important reminder that even natural supplements need to be used cautiously and evaluated objectively. (11)