This is the second part of my interview with the founder and president of the Nutrition and Metabolism Society, Dr. Richard Feinman. Apart from the information presented, I hope you’ll take note of a theme that he continually comes back to: concerns and/or opinions do not equal evidence. This is true whether they’re stated by celebrities, doctors, family or neighbors. In order to truly understand the value of any diet or health practice, we must first evaluate the evidence behind it. What’s more, any reasonable health authority should be willing to back his or her point of view with a solid scientific foundation. Dr. Feinman is an excellent example of this. He handles my inquiries head on with the confidence that he has science on his side. 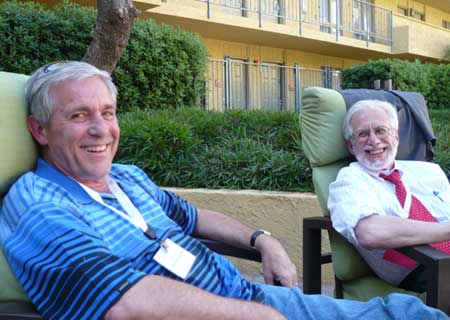 Before launching into my second batch of questions, I thought it might be helpful to have some background information on Dr. Feinman, which might help us better understand his perspective. The following quotes come from his preface to my interview with him:

Dr. Feinman – In the way of orientation, I am not really a proponent of anything. As researcher and teacher, I present the biochemical features of diets that make them more or less desirable. The research points to a significant reduction in carbohydrate restriction as the default diet, the one to try first, for people with diabetes. That this is somehow controversial appears to me to be an indication of just how far the medical literature has steamed away from common sense and sound scientific reasoning — everybody admits that dietary carbohydrate restriction is the surest method for reducing blood glucose, the most salient feature of diabetes. Because of the importance of glucose and insulin in controlling metabolism, some form of carbohydrate restriction is probably also the default diet for cardiovascular health as well and no diet works better for most people who want to lose weight. This is the kind of diet I am on and my family is on. If the evidence for another diet suddenly gets better and it works for me, I will be glad to switch. I have no stake in this. I do not have any pork-belly futures (whatever that is) and I am far more likely to get funded by the NIH if I espouse low-fat research than currently.

In the first year biochemistry course at Downstate Medical Center, we use the underlying science of low carbohydrate diets to teach metabolic pathways. Students sometimes ask “why don’t you teach the other side?” and my answer is that “there is no other side”. If your patient gets better on a low fat diet, everybody thinks that’s great. On the other hand, from the stand-point of basic biochemistry, low-fat diets don’t have much underlying principles beyond “you are what you eat” which is not interesting for a biochemistry course. Practically, many people do well on low fat diets, but given how consistently a low fat diet has been recommended, it is alarming that many more do not succeed and, as in the epidemic of obesity and diabetes where fat consumption went down and carbohydrate went up, many get worse. That leads us to consider the basic biochemistry behind metabolism, which may lead you to an alternative. With that intro, let me consider your questions.

JP – Are there certain segments of the population for which a low carbohydrate diet isn’t appropriate? This question is sometimes mentioned when discussing the dietary needs of children, patients with heart or kidney disease and seniors.

Dr. Feinman – No. Children are generally exposed to too much carbohydrate. Patients with any problem are in the care of a physician, but it is for sure that increasing carbohydrate will not help people with heart and kidney disease. Many patients with kidney disease may need to reduce protein but the misconception that low carbohydrates are necessarily high in protein has, again, been shown to be false — going back to the standard diet of steak and potatoes and broccoli. If you take out the potato, few people want another steak and, in practice, most put in more broccoli if anything. Practicing physicians are primarily interested in helping their patients and are not as doctrinaire as the nutrition panels of health organizations. Most know the benefits of carbohydrate restriction and can modify the diet to meet individual patient needs.

Here’s a better question: Are there certain segments of the population for which a traditional low-fat, high grain diet that is widely recommended by health officials and very commonly practiced isn’t appropriate? After forty years of this diet as the standard we have major problems of childhood obesity, high prevalence of heart and kidney disease and an increasing number of seniors with health problems. It seems that the dietary needs of this segment of the population have not been met by the current health agencies. Would it be OK if we look at that first since so many people are doing it?

JP – Your journal, Nutrition & Metabolism, often features studies involving nutritional supplements. Do you have any general advice about incorporating dietary supplements in the context of a carbohydrate restricted diet?

Dr. Feinman – Overall, I tend to follow the principle stated by Gerald Reaven that what we need is “more information and less advice,” so I don’t have any general opinion. The problem of supplements, like nutrition in general, is individual and we try to accept good papers but the literature in this area is of very variable quality and does not allow of easy choices. The recent report of the Dietary Guidelines for Americans Committee (DGAC) condemns all supplements. The large number of mistakes, the obvious bias and the incredibly low intellectual level of that report assures us that there is almost surely great value in some supplements.

JP – Higher carbohydrate/low fat programs that are geared toward improving heart health and/or weight loss often feature exercise and stress reduction. How important is it to add these complementary strategies as part of a holistic low carbohydrate lifestyle?

Dr. Feinman – Again, there should be individual choice but I think just about the only thing everybody agrees on is that exercise is good. It is generally agreed as well that, by itself, exercise does not lead to weight loss (unless it is at the level of the Tour de France). As Alan Brooks said in the movie The Scout (he is a baseball scout who discovers a brilliant pitcher with a huge appetite): “I got two words for you: Fernando Valenzuela.” Although there are many benefits, some people who are very heavy (especially kids) have to lose a good deal of weight before they start exercising. Stress reduction is also of obvious value but if you are on a low-carbohydrate diet and want to discuss it with a nutritionist, stress reduction is not going to be part of your lifestyle.

“Real World” Food Selection While on a Low Carb Diet

JP – In the October 2006 edition of the Nutrition Journal, you presented the results of a large-scale survey involving “active low-carbers”. Can you please briefly summarize your findings?

Dr. Feinman – The paper covers a broad range of questions and is hard to summarize since it makes many separate points. However, the paper is available on-line without subscription at: http://www.nutritionj.com/content/5/1/26. Although it has a few technical sections, I think it is easily understandable. A few of the main points:

Although a lot of issues were raised, I would identify two big take-home messages: 1) low-carbohydrate diets tend to be high vegetable diets and 2) don’t assume that your physician is not in sympathy with carbohydrate restriction. It is more than likely that they are either supportive or will be if you explain what you are trying to do.

Are there additional questions that you wish I’d asked Dr. Feinman? If so, please let me know in the comment section. I may be able to pass them along. I can’t promise that he’ll have the opportunity to answer them, as I’ve already “borrowed” a good deal of the good doctor’s time. However, I will give it my best shot. You can also try to reach Dr. Feinman on Twitter via the NMSociety account. In the meantime, please stayed tuned for the third part of our interview. It’s quite possible that some of your favorite inquiries will be addressed this upcoming Wednesday. Until then …