A reader recently asked me whether adding cow’s milk to coffee negates any of its health benefits. My investigation into the topic lead me down a few different roads. However, all of the paths ultimately ended at the same destination – how to make a healthier “cup of Joe”. The solution is simpler and tastier than you might think. 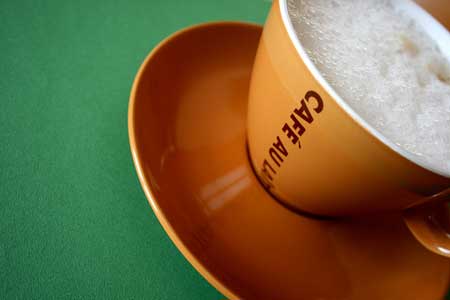 On the whole, the news about the health benefits of coffee continues to remain very positive. This month alone there have been at least three encouraging studies of note. The first looked for a connection between coffee consumption and cardiovascular morbidity and mortality in a group of 37,514 men and women over a 13 year period. Those who drank between 2 to 3 cups of java a day were found to have a 21% lower “hazard ratio” for heart-related morbidity. An intake of 3 to 6 cups daily resulted in a 36% lower risk of coronary heart disease linked mortality. The two remaining publications included a meta-analysis of 24 studies that investigated a proposed link between coffee use and colorectal cancer, and a population study that looked for an association between coffee intake and depression. The cancer review found that the heaviest coffee drinkers were 30% less likely to be diagnosed with colorectal malignancies as compared to “non/low drinkers”. The depression inquiry found a dramatic 72% “decreased risk for depression when compared with non-drinkers”. The conclusion of the study states, “Coffee consumption may decrease the risk of depression, whereas no association was found for tea and caffeine intake”. (1,2,3)

There isn’t a great deal of evidence in the scientific literature exploring the issue of coffee and cow’s milk interactions. By far, the best data currently available can be found in the February 2010 issue of the Journal of Nutrition. There, a pilot trial examined the absorption and retention of coffee-derived antioxidants in 9 healthy subjects. On separate occasions, the study participants were given different coffee preparations: a) instant coffee; b) instant coffee + 10% whole milk; c) instant coffee + nondairy creamer + sugar. All of the coffee beverages contained an identical amount of chlorogenic acid, one of the primary, health promoting phytochemicals contained in coffee.

The findings indicate that the addition of milk did not significantly alter “the overall bioavailability of coffee phenolic acids, whereas sugar and nondairy creamer” did affect the “maximum plasma concentrations or Cmax” and the retention of these select antioxidants or Tmax. (4)

These results are largely consistent with several other laboratory studies conducted in animal and in-vitro models. To be clear, some research has shown that dairy protein (casein) does bind to antioxidants such as chlorogenic acid. But this interaction doesn’t appear to negatively affect total antioxidant capacity. This may partially have to do with a decoupling effect that naturally occurs during digestion. (5,6,7,8)

So to answer my reader’s question – At present, there’s no reason to be concerned about adding milk to your coffee. But I wondered whether there was an added benefit to doing so. It appears that there may be more than one justification.

Some, but not all, studies have found that men and women with certain genotypes are at greater risk for bone loss if they drink large quantities of caffeinated coffee. In addition, there are certain health conditions which can magnify that risk including kidney disease which requires dialysis. However, it’s important to note that not all scientific inquiries have reported negative associations with respect to coffee and skeletal health. For instance, a 5 year study involving male twins found that femoral bone mineral density was actually higher in regular coffee drinkers. Other investigations have failed to find any correlation whatsoever. A middle ground may be found in a 1994 publication appearing in the Journal of the American Medical Association. It concluded that drinking two cups a day of coffee can lead to decreased bone density *if* you don’t drink milk. (9,10,11,12,13)

Another realistic concern about coffee is how it can influence the risk of esophageal cancer. It’s long been known that drinking very hot coffee or tea can increase the likelihood of thermal burns to the sensitive tissues of the esophagus. This is an integral part of a process which can contribute to the risk of esophageal malignancies. Adding milk to coffee and tea substantially lowers the “starting temperature” of hot beverages and can render them considerably safer. (14,15,16)

All of the data I’ve presented thus far might suggest that I’m a fan of adding cow’s milk to coffee. The true test is whether I use it myself or recommend it to my family. I certainly like the taste of cream and milk in my coffee. However, I don’t recommend or use it because of its allergenic potential and relatively high carbohydrate count. Instead, I use a calcium-fortified, hypoallergenic, low carbohydrate alternative – Blue Diamond unsweetened, vanilla almond milk. I think it tastes great and provides better nutrition than most dairy products. As a bonus, it’s also lower in calories. (17)

Using unsweetened almond milk is one way to improve the quality of coffee by the adding calcium to the mix and simultaneously lowering the beverage temperature. Another simple technique to supercharge your coffee is to add a dash or two of cinnamon. Recent studies demonstrate that cinnamon: a) targets inflammation-induced obesity by combating hyperglycemia (high blood sugar) and insulin resistance; b) possesses “potent anti-tumor” activity; c) may slow the aging process by countering the formation of advanced glycation endproducts (AGEs). (18,19,20,21,22)

If you need one more reason to consider cinnamon, please note that preliminary research hints that it may protect against bone loss by inhibiting bone resorption. I also think it adds a soothing complexity to the brew. Here’s how I’ve been making my afternoon coffee lately: I put a heaping tsp of organic instant coffee into a cup. To that I add about 1/4 tsp of organic cinnamon powder and 1 packet of organic stevia with inulin. I pour hot water over the powder and then top it off with a few ounces of unsweetened vanilla almond milk. It takes just like a treat that you might get a coffee house. But the health benefits and price tag truly set it apart. (23)